The Times of Earth, International Edition
0
498 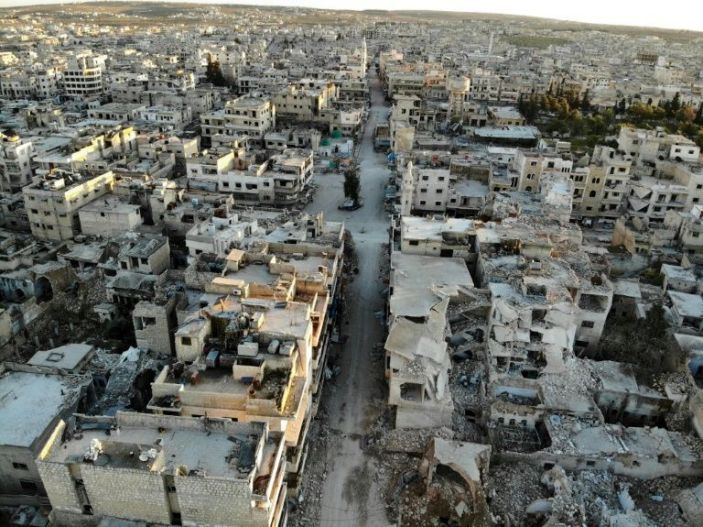 Syrian regime forces have reached the outskirts of a key city on the edge of the country’s last rebel-held stronghold, a monitor and a pro-government newspaper said Sunday.

The mainly deserted city of Maaret al-Numan is a strategic prize lying on the M5 linking Damascus to Syria’s second city Aleppo, a main highway coveted by the regime as it seeks to regain control of the entire country.

It is one of the largest urban centres in the beleaguered northwestern province of Idlib, the last stronghold of anti-regime forces and currently home to some three million people — half of them displaced by violence in other areas.

The regime and its Russian ally have escalated their bombardment against the jihadist-dominated region since December, carrying out hundreds of air strikes in southern Idlib and the west of neighbouring Aleppo province.

Over the past 24 hours, government ground forces have seized seven villages on the outskirts of Maaret al-Numan, the Syrian Observatory for Human Rights war monitor said Sunday.

They have now reached “the edges of the city and are… within gunfire range of part of the highway”, it said.

Pro-regime newspaper Al-Watan reported that loyalist forces were “just around the corner” from the city, whose “doors are wide open”.

Idlib and nearby areas of Hama, Aleppo and Latakiya provinces are dominated by the Hayat Tahrir al-Sham (HTS) jihadist group, led by members of the country’s former Al-Qaeda franchise.

The regime of President Bashar Al-Assad has repeatedly vowed to reassert control over the whole of Syria, despite several ceasefire agreements.

Assad’s forces, which are also battling HTS jihadists in western Aleppo province, are backed on both fronts by Syrian and Russian air strikes.

The fighting has left dozens of fighters dead on both sides.

Since 1 December, some 358,000 Syrians have been displaced from their homes, the vast majority of them women and children, according to the United Nations.

A ceasefire announced by Moscow earlier this month was supposed to protect Idlib from further attacks, but the truce never took hold.

Aid agencies and relief groups have warned that further violence could fuel what may potentially become the largest wave of displacement seen during Syria’s nine-year-old civil war.

Syrian government forces now control around 70 percent of the country and Assad has repeatedly vowed to retake Idlib.

The global spread of the coronavirus: Where is it?