Swim, jog, but no sunbathing: France reopens some beaches

The Times of Earth, International Edition
0
1177 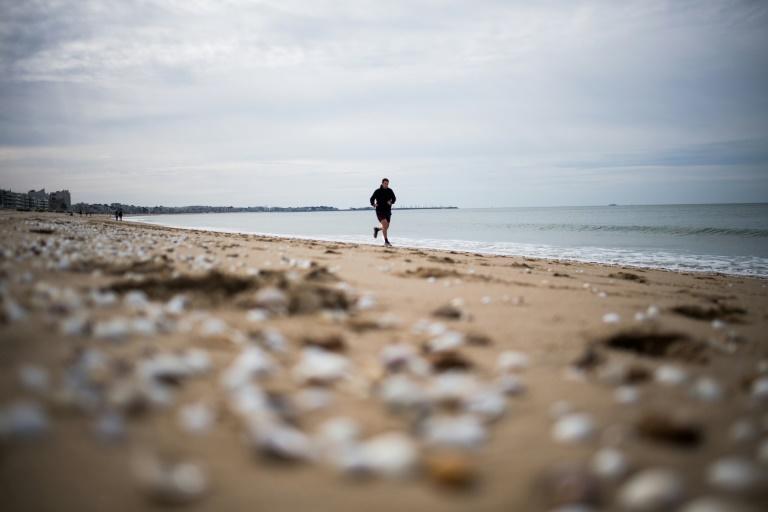 Officials opened some beaches on the west coast of France, but not for static activity such as picnic parties or sunbathing (AFP Photo/Loic VENANCE)

Runners and swimmers rediscovered the sea air Wednesday as France opened a selection of Atlantic coast beaches closed during the coronavirus lockdown, while the Lourdes sanctuary prepared to welcome back Catholic pilgrims this weekend.

But the cautious relaxation of restrictions stipulated that while beach-goers can swim or go fishing, no sunbathing is allowed.

The Catholic shrine at Lourdes, meanwhile, will allow only a limited number of visitors and keep some areas off-limits.

Local officials have reopened a number of beaches on the west of France, banning any “static presence — seated or lying down”, including picnicking.

Walkers, swimmers, individual watersports practitioners and anglers are welcome, provided they respect the social-distancing rule of one metre (3.3 feet) between individuals, said a tweet from the Loire-Atlantique department.

Other beaches remain off-limits, however, including Deauville in Normandy, a favourite with Parisians, for whom it is a 2.5-hour train ride away.

“If we say we will open the beaches, everyone will descend on them and it will be a terrible crowd,” Deauville mayor Philippe Augier told the France 3 broadcaster.

Beaches on the Mediterranean coast and the North Sea could reopen from this weekend for walks and sporting activities, say local officials.

France started emerging Monday from a two-month lockdown, which the government credits with saving tens of thousands of lives by limiting the spread of the coronavirus, but which has exacted a heavy economic toll.

The country remains on high alert, with heightened precautions in so-called “red zones” — including Paris and the wider Ile-de-France region — where the virus remains active.

Cafes, restaurants, bars, many schools, parks and gardens remain shuttered in these areas, on top of a nationwide ban on gatherings of more than 10 people.

In lower-risk areas, local officials can apply for permission to reopen beaches and lakes.

In France’s southwest meanwhile, the Lourdes sanctuary, which receives millions of visitors every year, said it would start reopening from Saturday.

Officials say that for the moment they will only allow individual pilgrims from nearby areas.

French people are allowed to travel no more than 100 kilometres (62 miles) from home without a certificate to justify longer trips.

The cave where Catholics believe the Virgin Mary appeared to a French peasant girl in 1858 will remain off-limits for visitors, said the religious establishment. The wearing of a face mask will be compulsory on the rest of the site.

The sanctuary expects losses of about eight million euros ($8.7 million) due to the prolonged absence of pilgrims and their offerings.

Paris Mayor Anne Hidalgo, meanwhile, continued campaigning Wednesday for the reopening of parks and public gardens in the capital, a measure the national government rejects.

“Opening the parks and gardens in Paris is first and foremost a matter of public health: it is a very dense city, we must gain space,” tweeted the mayor, who also wants to make public mask-wearing compulsory.

But the government believes reopening parks and gardens would be “inopportune given the rapid circulation of the virus” in the Ile-de-France region, spokeswoman Sibeth Ndiaye insisted.

The coronavirus has claimed more than 26,000 lives in France to date, with 348 deaths reported in the daily briefing Tuesday.