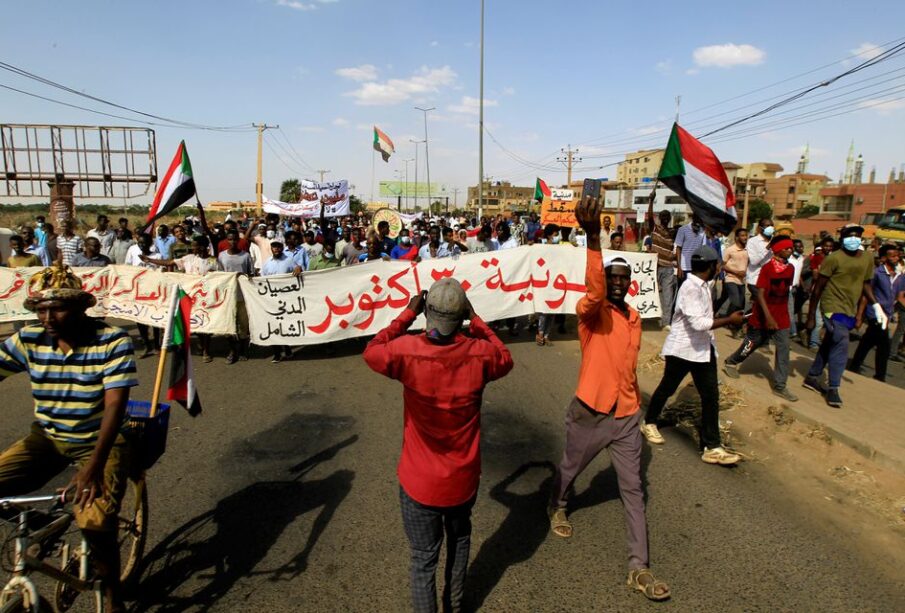 Protesters carry a banner and national flags as they march against the Sudanese military's recent seizure of power and ousting of the civilian government, in the streets of the capital Khartoum, Sudan October 30, 2021. REUTERS/Mohamed Nureldin/File Photo

Sudanese pro-democracy groups on Sunday launched two days of civil disobedience and strikes in protest against last month’s military coup, although participation appeared to be limited by interruptions to internet and phone connections.

In a sign of the potential for the coup to unravel efforts to end decades of internal conflict, armed rebel factions that signed a peace deal last year rejected the coup and called for the ending of a state of emergency.

The commander of the powerful Rapid Support Forces, who is the No. 2 man in Sudan’s military, came out in support of the takeover in a midnight speech posted on Facebook.

General Abdel Fattah al-Burhan’s moves “came to correct the course of the people’s revolution, and preserve the security and stability of the country,” said General Mohamed Hamdan Dagalo, known as Hemedti, Burhan’s deputy on the now-dissolved Sovereign Council.

Local resistance committees and the Sudanese Professionals Association (SPA), which led demonstrations in an uprising that toppled long-serving autocrat Omar al-Bashir in 2019, are organising a campaign of protests and barricades to try to reverse the military takeover.

People were out on the streets on Sunday in the centre of the capital, Khartoum, although there was less traffic than usual, residents said.

A teachers union said security forces used tear gas at the Education Ministry building for Khartoum State to break up a sit-in staged to oppose any handover to military appointees. Some 87 people were arrested, it said.

In several areas in eastern Khartoum, across the river in the Ombada area of Omdurman, police also used tear gas to break up protests, witnesses said. On one major Khartoum street, security forces in civilian clothing were seen alongside police, they said.

There were protests too in the cities of Medani, Nyala and Atbara, where hundreds protested the reappointment of Bashir loyalists in local government, witnesses said.

Some hospitals and medical staff in Khartoum were working normally, while others were on strike.

“A number of people did not know about the call for civil disobedience because of the internet cut,” said one resident of central Khartoum, who asked not to be identified.

Internet services have been almost completely disrupted since the Oct. 25 coup, and phone coverage remains patchy. Daily life came to a near standstill after the takeover, but shops, roads and some banks have since reopened.

The coup halted a power-sharing arrangement between the military and civilians that had been agreed after Bashir’s overthrow and was meant to lead to democratic elections by late 2023.

Mediation efforts involving the United Nations have sought the release of detainees and a return to power sharing, but sources from the ousted government say those efforts have stalled.

Since Bashir was toppled, Sudan had been emerging from decades of isolation and internal wars. A peace agreement signed last year with rebel groups was intended to end several of those long-running conflicts.

The Sudanese Revolutionary Front, which said it rejected the coup, includes rebel groups led by three men who had sat on a military-civilian ruling council dissolved during the takeover, Elhadi Idris and Altahir Hajar from Darfur and Malik Agar of the southern SPLM-N.

Two other major rebel groups that did not sign the peace agreement have also rejected the coup. Some signatories of the peace deal, including Darfur rebel group leaders Jibril Ibrahim and Minni Minawi, had aligned with the military in the weeks leading up to the coup.

On Sunday, an Arab league delegation met Hamdok and Burhan, and stressed the importance of dialogue in order to return to a civilian-military partnership, it said in a statement.

Activists demanding that the military exit politics have announced a schedule of protests leading up to mass rallies on Saturday, under the slogan: “No negotiation, no partnership, no compromise”.

Hundreds of thousands took to the streets against military rule in two huge demonstrations before and after the coup.

Western powers have paused economic assistance to Sudan and say that relief on tens of billions of dollars of foreign debt is at risk unless there is a return to a democratic transition.