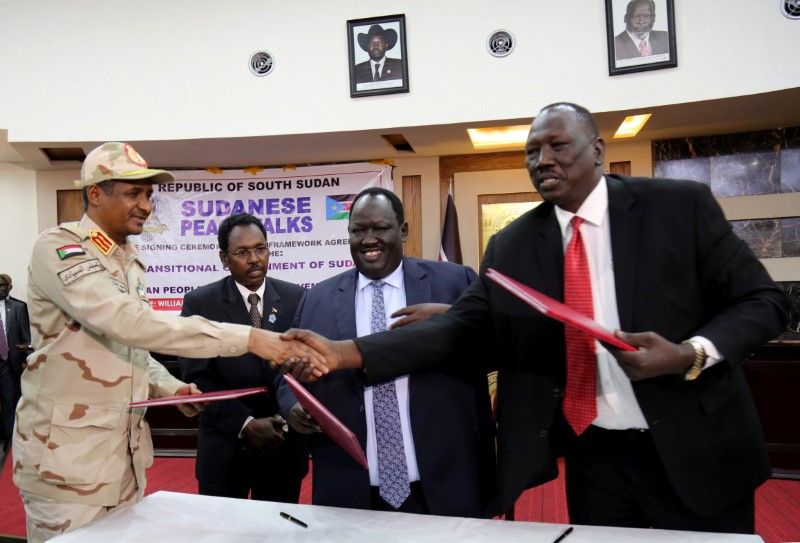 Sudan’s transitional government Friday signed a preliminary peace deal with one of several rebel groups that had fought the government of ousted authoritarian president Omar al-Bashir for years.

In a ceremony in Juba, South Sudan’s capital, the interim Sudanese government agreed on a framework for peace with the rebel Sudan People’s Liberation Movement-North. Deputy chief of the Sudanese Sovereign Council, Gen. Mohammed Hamadan Dagalo, signed the agreement along with Malik Agar, head of the Sudan People’s Liberation Movement-North, a rebel group active in the Blue Nile and South Kordofan regions.

Rebel groups and the government have until Feb. 14 to ink a comprehensive peace deal.

Juba has hosted and mediated Sudan peace talks since October. The signing was attended by South Sudan President Silva Kiir, whose own country gained independence from Sudan in 2011 following decades of civil war.-

Hundreds of thousands of people have been killed in fighting in Sudan’s multiple insurgencies, including in the restive western Darfur region. That’s where al-Bashir brutally repressed an uprising in the early 2000s. Since then, the International Criminal Court has sought to arrest al-Bashir on charges of war crimes and genocide.

Dagalo said in a statement after the ceremony that his government seeks to achieve a “comprehensive peace that can improve people’s lives and put an end to the tragedies caused by injustice and marginalization.”

After sweeping street protests toppled al-Bashir in April, a power-sharing deal between military and civilian leaders called for peace negotiations with the country’s rebels. The agreement gave transitional authorities a six-month deadline ending in February to make peace with armed groups who have been fighting the central government for years.

“This is a prelude to peace, and our country will not collapse nor fall within the ranks of failed states,” he said after the ceremony.

Sudan’s transitional government is under pressure to end wars with rebel groups as it seeks to rehabilitate the country’s battered economy, attract much-needed foreign aid and deliver the democracy it promises.

“This agreement framework is almost a final deal; very few details are left to discuss,” said Osama Said, spokesman for Sudan Revolutionary Front, an alliance of rebel groups, who attended the ceremony.

“The Juba peace talks are going well,” Said told The Associated Press. He said a similar agreement would soon be reached with rebel factions from Darfur.

In the first round of direct talks in October, Sudanese authorities worked to restore the rebels’ trust in the government through various gestures of goodwill. Those included releasing several prisoners of war and postponing the formation of a parliament and appointment of governors until a peace deal could allow rebels to gain representation.

Although Friday’s preliminary deal was hailed by signatories as a step in the right direction, Sudanese interim leaders still seem far from reaching a similar agreement with the more significant faction of the Sudan People’s Liberation Movement-North led by Abdel Aziz al-Hilu.

Al-Hilu has called for a secular state with no role of religion in lawmaking, the disbanding of all al-Bashir’s militias and the re-vamping of the country’s military. If these demands are not met, Al-Hilu said he would call for self-determination in areas under his control.