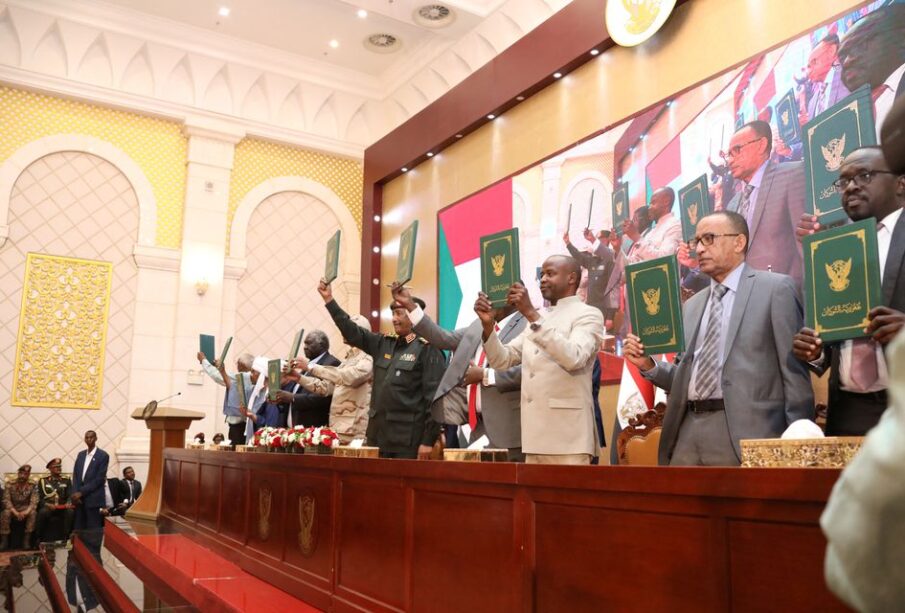 Sudanese political parties and the military signed a framework deal on Monday that they said would pave the way for two-year civilian-led transition towards elections and end a sometimes violent standoff triggered by a coup in October 2021.

The deal could mark a new phase for Sudan, but has already faced resistance from protest groups opposed to negotiations with the military and from Islamist factions loyal to the regime of toppled leader Omar al-Bashir.

Several thousand people protested against the deal in the capital Khartoum, with some facing off against security forces who fired tear gas and stun grenades about a mile away from the signing ceremony.

Under the framework deal, the military – in charge since the coup – agreed it would only be represented on a security and defence council headed by a prime minister.

The outline pact set no date for a final agreement or the appointment of the prime minister, and left sensitive issues including transitional justice and security sector reform for further talks.

After signing the deal, military leader Abdel Fattah al-Burhan said civilians should control politics and guide foreign policy. Signatories applauded when he repeated a slogan used by protesters to call for the army to exit politics: “Soldiers belong in the barracks, and parties go to elections.”

Last year’s military coup halted a power-sharing arrangement between the military and the Forces for Freedom and Change (FFC) coalition, and Sudan has been without a prime minister since the start of the year.

The takeover led to more than a year of mass protests against the military, during which security forces killed more than 100 civilians, according to a tally by medics.

Authorities have said peaceful protests are allowed and casualties will be investigated.

On Monday security officers fired tear gas and stun grenades to disperse protesters about 1-1/2km from the presidential palace, a Reuters witness said.

“We will defeat this agreement because it is an extension of the coup,” one protester, 36-year-old state employee Ahmed Fateh al-Rahman, said. “We want justice for our martyrs, trial for the military, and civilian rule.”

Mohamed Hamdan Dagalo, the powerful leader of the paramilitary Rapid Support Forces and Burhan’s deputy, pledged to protect the transition and issued a general apology “for the state’s violence and mistakes towards communities throughout (Sudan’s) history”.

Many of the groups signing Monday’s deal were the same that signed a constitutional declaration months after Bashir’s ouster, setting up the first transition.

“The goals of the agreement are establishing a fully civilian authority, creating a free climate for politics, and reaching a final agreement with the widest political participation,” Al-Wathiq al-Barir, a spokesman for the FFC, said.

The military has been pushing a separate, smaller FFC faction to get behind the deal, though one of its members, former rebel and Finance Minister Jibril Ibrahim, criticised it on Twitter as “exclusionary”.

The coup led to the suspension of billions of dollars in international financial assistance and a debt relief process, deepening an economic crisis in Sudan.

Though inflation has slowed, it remains above 100%. Hunger has been spreading and living standards have continued to slide for many.

“We’re not interested in politics,” said Mohamed Hassan, a 58-year-old construction worker in Khartoum. “We hope this agreement improves economic conditions and provides health and education to us and our children.”

International partners, who helped mediate the framework deal, say a credible civilian government is needed before assistance can be restored.

A grouping made up of the United States, Saudi Arabia, the United Arab Emirates and the United Kingdom welcomed Monday’s deal, saying they were working with partners “to coordinate significant economic support”.

“A concerted effort to finalise negotiations and reach agreement quickly to form a new civilian-led government is essential,” the group said in a statement.