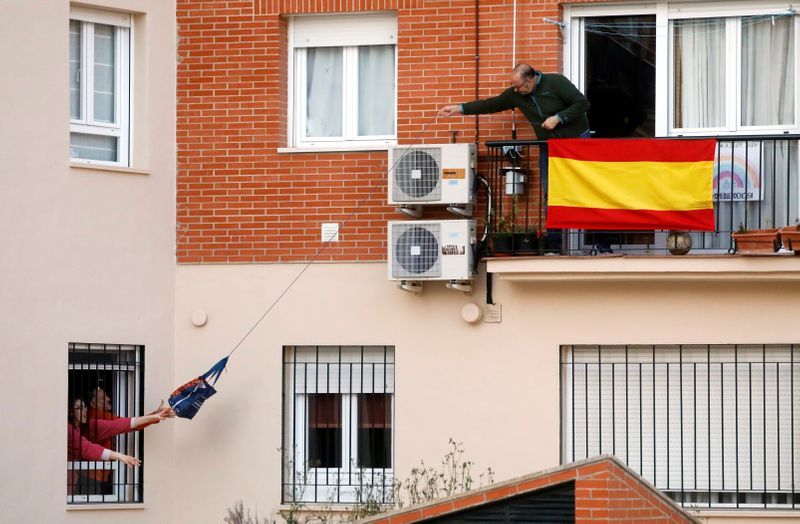 Spain’s daily increase in coronavirus fatalities further steadied at around 2% on Thursday after 440 people died in the past 24 hours, as the government apologised for confusion over lockdown rules for children.

With Europe’s second highest death toll of 22,157 and the world’s second most infections at 213,024, Spain has some of the toughest restrictions in Europe even though it is gradually easing them as the epidemic slows.

“I know this lockdown is not easy at all,” Deputy Prime Minister Pablo Iglesias said, confirming that those under 14 would be able to take short walks outside under supervision after nearly five weeks cooped up at home.

They would not be allowed in park playgrounds, however.

“I want to apologise because in the government over the past days and hours we haven’t been clear when explaining how you will be authorized to go out from Sunday,” he added.

On Tuesday night, after initially ruling out recreational walks for children, the government bowed to public pressure – including pot-banging protests on balconies – and allowed short, supervised outings for the first time in more than a month.

Hotels saw a 66% plunge in foreign visitors in March, even though a shutdown only came late in the month. Tourism accounts for 12% of gross domestic product in the world’s second-most visited nation.

Bankinter <BKT.MC>, Spain’s fourth-largest bank and the first to report quarterly earnings, said it had almost doubled provisions to reflect the worsening economic impact from the outbreak, which made its first quarter net profit shrink by 10%.

European Union (EU) leaders were discussing ways to restart their economies on Thursday, including a Spanish proposal for a 1.5 trillion euro recovery fund.

“Europe needs more fiscal firepower and we need it now. Every day thousands of companies are filing for bankruptcy. We need this proposal to fly,” said Ana Botin, chairman of Spain’s largest bank Santander, on Twitter.