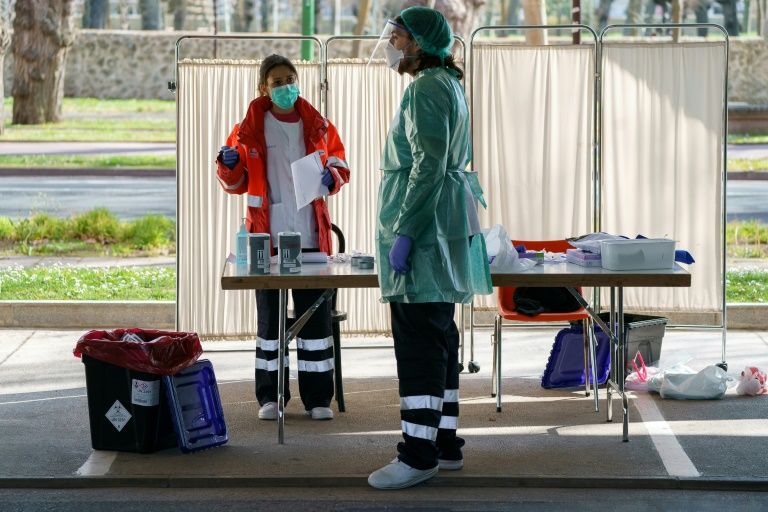 Spain toughened its nationwide lockdown on Saturday, halting all non-essential activities as it stepped up its fight against the deadly coronavirus epidemic that has so far claimed 5,690 lives.

Spain has the world’s second-highest coronavirus death toll after Italy, losing another 832 people over the last 24 hours as the number of cases soared to 72,248.

Despite the grim 24-hour death toll, health chiefs said the rate of infections was slowing, suggesting that the epidemic was nearing its peak.

But the strain on intensive care facilities was a big source of concern, with the greatest pressure expected in about a week’s time, prompting the government to up the restrictions to slow the contagion.-

“All workers in non-essential economic activities must stay at home for two weeks,” Prime Minister Pedro Sanchez said in a televised address, in a measure that follows similar moves in Italy.

“The most important thing is to slow the number of people being taken to hospital,” he said.

“The virus is hitting us with relentless brute force.. (and now) is the time to intensify the battle.”

The move will affect those working in construction and other non-essential sectors although they will continue to receive their salaries, Sanchez said.

But although Spain’s latest figures showed a daily increase of more than 8,000 cases, Fernando Simon, the health ministry’s emergencies coordinator, said earlier Saturday the rate was “slowing” with the figures “very very close” to peaking.

But even if the numbers peaked, the pressure on the intensive care system would be subjected to a lag of at least a week or longer, he warned.

“The patients who are getting infected today are going to need a bed… within seven to 10 days,” he said. “We really need a sharper drop (in infections).. so we don’t reach this capacity crisis.”

At La Princesa hospital in Madrid, 35-year-old radiologist Pablo Rodriguez described the influx of patients as “a total tsunami”.

“They’ve already told me that I am next on the list to go to A&E.

“It’s like going to the front line in a war,” said Rodriguez who cited shortages of surgical masks and said people were “reusing protective suits” because they were in such short supply.

Although Spain went into lockdown on March 14 the numbers have continued to grow, with a worrying rise in cases among healthcare personnel.

Although there was no update on Friday’s figure of 9,444 medical staff who had contracted the virus, Simon said it was a “larger number than that of most of the other affected countries,” with nearly nine percent of them requiring hospitalisation.

Madrid remains the worst-hit region, with 2,757 deaths and 21,520 infections, leaving hospitals and mortuaries on the brink of collapse, with officials working to open a second temporary morgue in an unused public building near the airport to house the dead.

With undertakers also overwhelmed, the government has authorised the army’s involvement in the collection and transport of bodies for the duration of the state of emergency.

As the nation marked two weeks since the lockdown was put in place, Spain on Saturday received first a delivery of 1.2 million masks from China for health workers and those in the transport sector.

The delivery includes 387,000 surgical masks for healthcare personnel, 75,000 masks for the security forces and more than 725,000 for those in the transport sector, from bus drivers to airport staff and those working for the postal service, the government said.

“We are working around the clock… to increase the availability of these products within the national health system,” she said.