Spain to treat thousands of coronavirus patients in conference hall as toll tops 1,000 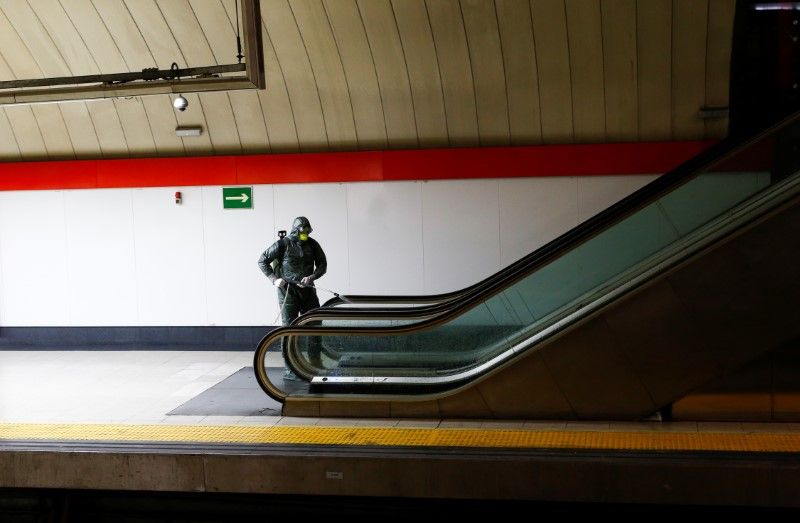 A Military Emergency Unit member disinfects Nuevos Ministerios metro station during a partial lockdown as part of a 15-day state of emergency to combat the spread of coronavirus disease (COVID-19) in Madrid. REUTERS

Spanish authorities said on Friday they would turn a Madrid conference center into a giant makeshift military hospital for thousands of coronavirus patients, as Europe’s second-worst outbreak claimed another 235 lives.

Some 5,500 hospital beds, including intensive care units, will be set up inside the 240,000 square meter IFEMA conference center on the capital’s outskirts to cope with surging demand expected in the coming days, the Madrid region said in a tweet.

“The most difficult days are coming now,” health emergencies chief Fernando Simon told a news conference, urging the population to stick to a partial lockdown imposed last Saturday as part of a nation-wide state of emergency.

“Keep up the effort, we have to manage (to defeat the virus) as soon as possible. The impact it is having on society cannot be sustained for long,” he said.

The capital has become the epicenter of the disease in Spain. With nearly 20,000 cases reported as of Friday, Spain overtook Iran to become the world’s third hardest-hit country by the pandemic after China and Italy. The Madrid region accounts for 628 deaths and 7,165 cases.

Some 30 firefighters were involved in an extensive disinfection operation at Madrid’s Monte Hermoso nursing home, and a military team was working in another near Madrid. The government promised measures on Thursday to protect the elderly and staff at nursing homes after large numbers of deaths.

Spain has swiftly followed Italy to become the second European country where hundreds of people are being killed by the coronavirus daily. The death toll shows little sign of slowing.

The country ramped up its efforts to curb the spread of the disease abruptly in the past week, ordering a nationwide 15-day state of emergency on Saturday that bars people from all but essential outings. Bars, restaurants and most shops have been shut and transport restricted.

Police said in a tweet they had broken up a party at a hotel dancing hall near Madrid and fined four people: “Some are still not taking it seriously… in a full state of emergency.”

The lockdown is also having a ruinous impact on the economy, which already had one of the developed world’s highest unemployment rates.

Inditex, owner of clothing chain Zara, said it was considering temporarily laying off around 25,000 staff in Spain if the state of emergency continues beyond April 15. [nL8N2BD3AL]

Cepyme, a lobby group representing small and medium-sized companies said in a report on Friday that assuming that the current lockdown lasts four weeks, it expected Spain to end the year with 300,000 fewer jobs than at the end of 2019.

On Thursday, the government gave all hotels seven days to shut.

Bank of Spain Governor Pablo Hernandez de Cos said the restrictive measures taken by European Union countries would lead to a “very severe” economic disruption, calling for coordination at the EU level.