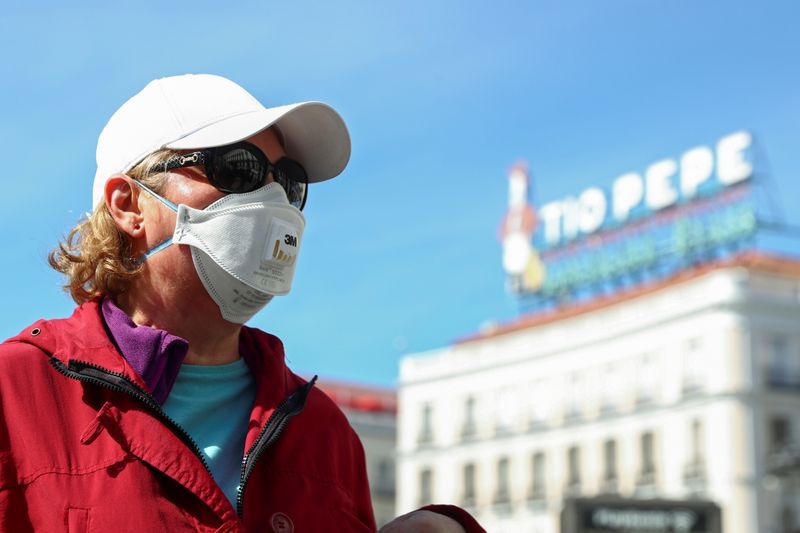 A woman wears a protective face mask as she stands at one of the main touristic landmarks Puerta del Sol in Madrid. REUTERS

Schools and universities in the Madrid region will close for two weeks starting on Wednesday as a precaution against coronavirus, Health Minister Salvador Illa told a news conference, as the infection spread further in Spain.

Regional authorities had said earlier that schools in Vitoria, the capital of the Basque region, would close for two weeks as well as a precautionary measure.

Twenty-eight people have died in Spain from the virus, official figures show. There are a total of 1,204 cases, still far behind Italy’s tally.

Prime Minister Pedro Sanchez said earlier on Monday, without giving details, that the government was preparing plans to mitigate the impact of the virus on the Spanish economy.

Prime Minister Pedro Sanchez said the government was preparing plans to mitigate the impact of the virus on the Spanish economy.

Without giving details, Sanchez said the government had been working on the plan for two weeks and was now ready to roll it out in collaboration with trade unions and businesses.

“We will announce a shock therapy plan in a few days, as soon as we determine the exact diagnosis and fine-tune the measures,” Sanchez said at a conference. “We want the plan to be effective and proportional to the scale of the problem.”

Economy Minister Nadia Calvino said the government was considering taking temporary measures to support the worst-hit industries, such as tourism.

Calvino said the government expected the economic impact of the coronavirus to be temporary and limited.

Several major events have been called off or postponed in Spain to minimise the transmission risk, but the government has so far not introduced more drastic measures such as travel bans.

By mid-afternoon, Spanish shares had fallen more than 6% as European markets plunged.

European Union leaders are set to hold a teleconference shortly to discuss a coordinated EU response to the coronavirus outbreak.

Europe told to act now as coronavirus locks down north Italy and ...