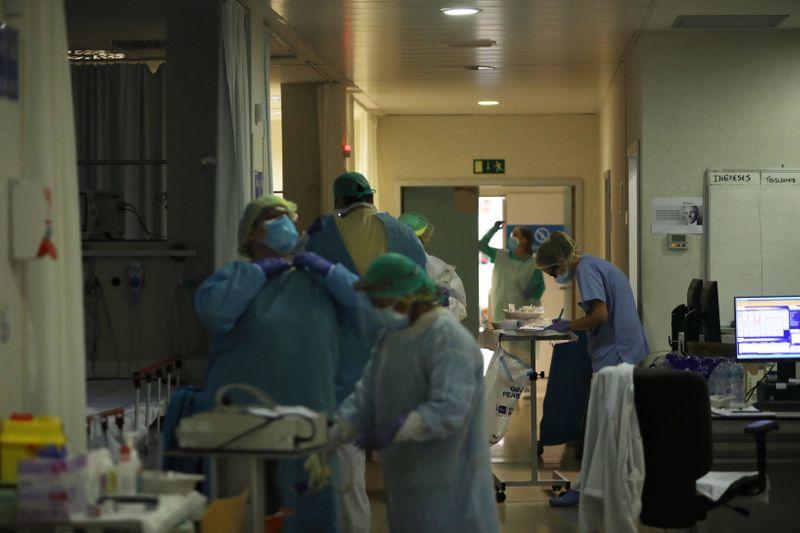 Healthcare workers in protective gear care for patients at the emergency room as the spread of the coronavirus disease (COVID-19) continues, at Infanta Sofia University hospital in Madrid. REUTERS

Spain registered its lowest daily number of coronavirus deaths since mid-March on Sunday, as half the population prepared for an easing of one of Europe’s strictest lockdowns.

Emergency Health Chief Fernando Simon said in a press conference that the daily death toll of 143 down from 179 on Saturday was the lowest since March 18.

“We continue with the downward trend reported in recent days,” he said.

It will include a considerable easing of measures that will allow gatherings of up to 10 people and let people move around their province.

In regions that made the cut such as the Canary and Balearic Islands, bars, restaurants and shops will open at reduced capacity and museums, gyms and hotels will open their doors for the first time in nearly two months.

But Spain’s two biggest cities – Madrid and Barcelona – do not currently meet the criteria for easing and will remain on Phase 0.

Regional governments in some areas that have not been allowed to pass completely to Phase 1, including Andalusia and Madrid, have been vocal in criticising the decision.

“It’s a blow for the economy,” Madrid regional President Isabel Diaz Ayuso said in an interview with newspaper El Mundo on Sunday.

“If everything continues as the experts indicate, this virus is going to be here for between one and two years, so since it is a long race for the health service we have to go to the next phase.”

Cyclists, joggers and walkers, many wearing face masks, packed the bridges and streets around Madrid Rio park on Sunday morning, as the park itself remained closed.

“Madrid is still in Phase 0, we can’t move onto Phase 1 tomorrow and I think that’s the right decision. I don’t think Madrid is ready yet to move onto the next phase,” said David Starton, 53, from Scotland, who has lived in Madrid for 20 years.

“It’s unfortunate, it’s quite sad and we’ll just have to put up with another week of restrictions and lockdown.”