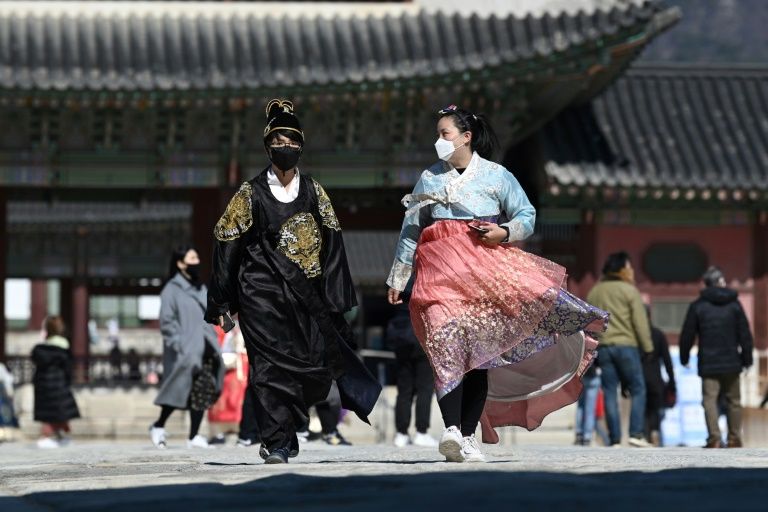 South Korea raised its alert on the coronavirus to the highest level Sunday after reporting three more deaths and 169 new infections.

The country has seen a rapid surge in the number of coronavirus cases since a cluster of infections emerged from a religious sect in the southern city of Daegu.

The national toll of 602 cases is now the highest outside China, apart from the Diamond Princess cruise ship in Japan.

“The COVID-19 incident faces a grave turning point. The next few days will be crucial,” said President Moon Jae-in following a government meeting on the virus.-

“The government will raise the alert level to the highest level of ‘grave’ according to experts’ recommendations and drastically strengthen our response system,” Moon said.

He also urged officials to take “unprecedented powerful measures” to contain the outbreak.

The government ordered all schools and kindergartens nationwide to extend the spring break by a week in an effort to prevent further spread of the virus.

One of the victims was a patient being treated for mental health issues at a hospital in Cheongdo, a southern city linked to the religious sect where around 100 new cases were reported.

Among the latest infections, 95 involved the Shincheonji Church of Jesus in the nearby city of Daegu, the Korea Centers for Disease Control and Prevention said.

More than 300 cases have been linked to the church, starting with a 61-year-old woman who developed a fever on February 10 and attended at least four services in Daegu before being diagnosed.

Some 9,300 Shincheonji members in Daegu have either been quarantined or have been asked to stay at home, said KCDC director Jung Eun-kyeong, with more than 1,240 saying they had symptoms.

The mayor asked all Shincheonji members with symptoms to come forward and be tested, with hundreds of members yet to be reached by authorities.

Moon described the situation in Daegu and Cheongdo — the birthplace of Shincheonji’s founder Lee Man-hee — as a “national crisis”, adding the cities will receive “full support” for any lacking medical supplies and personnel.

Shincheonji, often accused of being a cult, claims its founder has donned the mantle of Jesus Christ and will take 144,000 people with him to heaven on judgement day.

But with more church members than available places in heaven, they are said to have to compete for slots and pursue converts.

In a video statement read out by its spokesman, Shincheonji apologised for “causing concern”, but insisted it was cooperating with health authorities for the “early cessation” of the situation.

The spokesman refuted public criticism blaming his church over the spike in the number of infections, noting the virus had broken out in China.

“Please be aware that the Shincheonji Church of Jesus and its members are the biggest victims of the COVID-19,” he said.

Among the new cases were 18 people recently returned from a group pilgrimage to Israel, the KCDC said.

It was unclear how they had been infected, but authorities said one of the victims were likely exposed to the virus before their trip, given Israel has reported only one confirmed COVID-19 case so far.

Israel has issued an entry ban on South Koreans and refused to allow non-Israelis to disembark from a Korean Air plane on Saturday.

The US State Department on Saturday raised its travel advisory for South Korea, joining a handful of countries bolstering their vigilance after its rapid spike in the number of infections.

US citizens were asked to “exercise increased caution” when travelling to South Korea, where “sustained community spread” has been reported.

“Sustained community spread means that people in South Korea have been infected with the virus, but how or where they became infected is not known, and the spread is ongoing,” the State Department said on its website.

Britain has also advised its nationals “against all but essential travel to Daegu and Cheongdo”.