The Times of Earth, International Edition
0
713 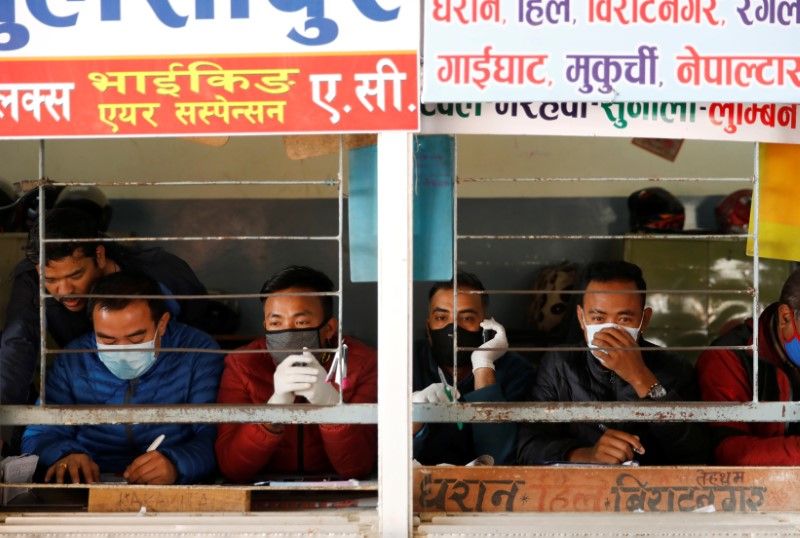 Workers wearing face masks sit inside a bus ticket counter, amid concerns about the spread of the coronavirus disease (COVID-19) outbreak, in Kathmandu, Nepal. Reuters

Sri Lanka imposed a nationwide weekend curfew on Friday as South Asian countries escalated efforts to check the spread of coronavirus across the densely populated region of 1.9 billion people.

South Asia appears to have been less hard hit than elsewhere in the world but the rate of new infections in Pakistan, India and Sri Lanka is accelerating with the total across South Asia passing 800. Seven people have died.

Officials worry that these countries could prove especially in danger due to poor health facilities and infrastructure in much of the region. The virus has already infected more than 245,000 people worldwide and killed more than 10,000.

A police curfew took effect nationwide in Sri Lanka at 6 p.m. (1300 GMT) on Friday and will run until 6 a.m. on Monday, as authorities on the island acted to slow transmission of the virus, which has infected 70 people there.

In India’s financial hub Mumbai, authorities on Friday ordered all businesses and offices other than those providing essential services to shut down until further notice.

India, the world’s second most populous country, also plans to halt all incoming international flights to help stem the number of cases, which passed 220 on Friday.

That number could rise sharply when India begins to ramp up testing on suspected carriers.

Authorities have so far tested fewer than 14,000 people for the virus, the Indian Council of Medical Research said on Friday – a tiny fraction of its 1.3 billion people.

Mosques in Sri Lanka were shut indefinitely on Friday, but others in South Asia remained open on the most sacred day of the week in Islam. Many worshippers remained defiant despite state advisories in several countries to avoid large crowds.

Outbreaks in Malaysia and South Korea both worsened after carriers of the coronavirus attended places of worship.

“Don’t be afraid of this corona. This corona can’t be stronger than our belief,” an Islamic cleric said in a loudspeaker announcement in Rawalpindi, a city adjacent to Pakistan’s capital Islamabad.

“Saying prayers at the mosque is much better an act than sitting at home like a coward,” Nasir Jan, 56, a trader, told Reuters after attending mosque. “We all have to die one day, but that doesn’t mean that we start quitting our beliefs.”

Other mosques in the region screened people for high temperatures using thermometers and urged their faithful to practice greater social distancing during Friday prayers.

Following Modi’s appeal, a senior district official in the town of Ayodhya in India’s northern state of Uttar Pradesh, said he expected the state government to call off the Ram Navami Mela, a major Hindu religious gathering in the temple town.

“We’re expecting an official order in a couple of days and it will be in line with what our prime minister said yesterday in his address,” said the senior official.

The annual Ram Navami fair in Ayodhya brings millions of Hindus to the holy city. This year authorities were expecting a surge in numbers, as the foundation-laying ceremony of the grand Ram Temple was also expected to take place.

Prime Minister K.P.Sharma Oli of Nepal, in an address to the nation, said all international flights were suspended until March 31. Public and private offices, except those providing essential services, will be shut until April 3 as a precautionary measure against the coronavirus. Public buses running on long routes will be suspended, he said.

“Remain clean, stay away from crowds, stay at home as far as possible, be patient, don’t panic and don’t be influenced by rumours,” the prime minister said.

Spain to treat thousands of coronavirus patients in conference hall as toll ...