The Times of Earth, International Edition
0
576 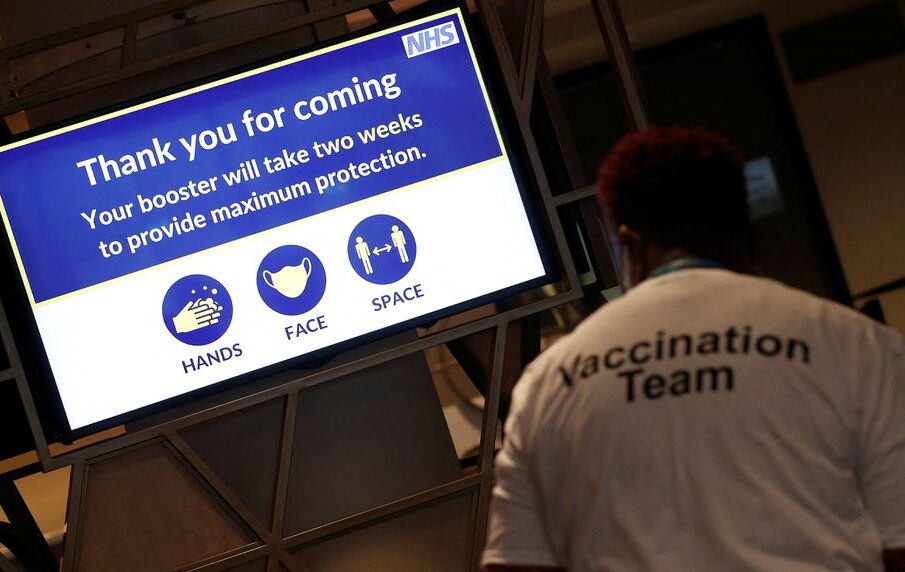 A NHS message is seen on a screen at a coronavirus disease (COVID-19) pop-up vaccination centre at Wembley Stadium in London, Britain, December 19, 2021. REUTERS/Peter Nicholls

A South African study offered Christmas glad tidings about the severity of Omicron and the trend of COVID-19 infections on Wednesday as the fast-spreading coronavirus variant forced countries across the world to impose new curbs.

The study by the National Institute for Communicable Diseases (NICD) suggested that those infected with Omicron were much less likely to end up in hospital than those with Delta.

COVID-19 cases also appear to have peaked in South Africa’s Gauteng province, which is its commercial hub and the region of the country where Omicron first emerged.

A new South African study, along with data on hospitalisations and deaths in the country’s fourth wave of COVID infections, suggest that the risk of severe disease is lower with Omicron than with previous variants, a top scientist has said. “Compellingly, together our data really suggest a positive story of a reduced severity of Omicron compared to other variants,” said Professor Cheryl Cohen of the National Institute for Communicable Diseases (NICD), one of the authors of the new study, during a news conference on Tuesday. South Africa’s noticeable drop in new COVID-19 cases in recent days may signal that the country’s dramatic Omicron-driven surge has passed its peak, medical experts said earlier.

Elsewhere, governments raced to contain the variant’s rapid spread, urging citizens to vaccinate as Omicron becomes the dominant strain and upending reopening plans that many had hoped would herald the end of the pandemic, and unnerving financial markets.

Germany, Scotland, Ireland, the Netherlands and South Korea have reimposed partial or full lockdowns or other social distancing measures in recent days.

Wales will reintroduce social distancing from Dec. 26. Health experts in Germany said new curbs there probably did not go far enough. The health minister said he had not ruled out a full lockdown.

Austria is to order a 10 p.m. close in the hospitality sector and classified Britain, Denmark, the Netherlands and Norway as risk areas, meaning arrivals from there must go into quarantine if they have not had a booster shot.

Belgium, the Czech Republic and Spain were also considering new curbs. The Indian capital of New Delhi banned Christmas and other celebrations.

The Chinese city of Xian told its 13 million residents to stay at home as it struggles to contain rising COVID-19 cases under Beijing’s zero-tolerance policy. Xian, home to the Terracotta Warriors, has not imposed a harsh lockdown as seen in early 2020 in Wuhan, where the coronavirus was first identified, but urged residents not to leave town.

Omicron was first detected last month in southern Africa and Hong Kong. Preliminary data indicates it is more resistant to vaccines developed before it emerged.

South Africa’s NICD study, conducted with major universities, has not been peer-reviewed. It compared South African Omicron data from October and November with data about Delta between April and November.

“In South Africa, this is the epidemiology: Omicron is behaving in a way that is less severe,” said Professor Cheryl Cohen of the NICD, one of the authors.

“Compellingly, together our data really suggest a positive story of a reduced severity of Omicron compared to other variants.”

Still, the authors included caveats and cautioned against jumping to conclusions, saying high population immunity was a likely factor. A study by Imperial College London last week found no sign Omicron was milder.

Policymakers across the world are scrambling to address the economic blow that might come from new outbreaks; Britain on Tuesday announced 1 billion pounds ($1.3 billion) of support for businesses hit hardest.

Some 300 South Korean business owners protested in Seoul on Wednesday against the return of strict social distancing rules, urging the government to scrap its “vaccine pass” policy and compensate for losses.

Professor Lawrence Young, virologist at the University of Warwick in England, said it was difficult to justify fourth shots “in a situation where around 73% of people in wealthy and middle-income countries have been (fully or partly) vaccinated … whereas only 12% are vaccinated in Africa”.

Tedros Adhanom Ghebreyesus, director-general of the World Health Organization (WHO), said boosters should not be seen as the only way of dealing with the pandemic when other countries are struggling to roll out shots.

“No country can boost its way out of the pandemic,” he said at a briefing in Geneva. “Blanket booster programmes are likely to prolong the pandemic rather than ending it.”

More than 275 million people have been reported to be infected with the coronavirus around the world, and nearly 5.7 million have died, according to a Reuters tally.

Infections have been reported in more than 210 countries and territories since the first cases were identified in central China in December 2019.

U.S. President Joe Biden on Tuesday promised to distribute half a billion free rapid COVID-19 tests, and warned the quarter of American adults who are unvaccinated that their choices could spell the “difference between life and death”.

Some wealthy countries want to shorten the time between second vaccination shots and boosters, hoping this will reduce the need to burden weary citizens with new lockdowns.

Australia on Wednesday reported more than 5,000 daily infections for the first time. Prime Minister Scott Morrison nevertheless insisted that strict lockdowns would not be brought back.

Putin says Russia has ‘nowhere to retreat’ over Ukraine