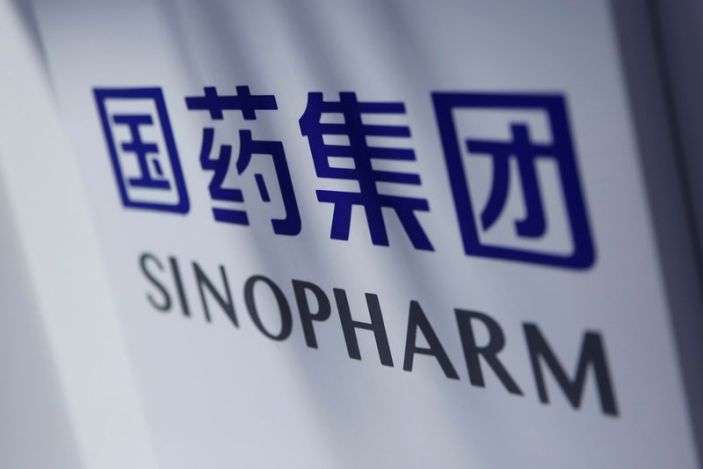 A sign of Sinopharm is seen at the 2020 China International Fair for Trade in Services (CIFTIS), following the COVID-19 outbreak, in Beijing, China September 5, 2020. REUTERS/Tingshu Wang

A vaccine developed by a unit of China National Biotec Group (CNBG) is 79.34% effective at protecting people from COVID-19 and the company is seeking regulatory approval for general public use in China, the developer said on Wednesday.

The efficacy rate, based on interim analysis of Phase 3 clinical trials, is lower than 86% rate for the same vaccine announced by the United Arab Emirates on Dec. 9, based on preliminary data from trials there.

A company spokeswoman declined to explain the discrepancy and said detailed results would be released later, without giving a timeline.

There have been fragmentary releases of efficacy data for Chinese vaccine makers’ COVID-19 candidates, which are being considered by many developing countries for mass inoculation campaigns.

Health experts warn that the differing results could undermine confidence in vaccines.

Turkish researchers said on Thursday their interim results from a COVID-19 vaccine developed by China’s Sinovac Biotech showed 91.25% efficacy only to see a confusing readout the same day from Brazil, which said the vaccine’s efficacy was between 50% and 90%.

While the efficacy of the China-developed shots trails the more than 90% success rate of rival vaccines from Pfizer Inc and its partner BioNTech SE and Moderna Inc, it points to progress China has made in the global race to develop successful COVID-19 vaccines.

China, whose President Xi Jinping has pledged to make its vaccines a global public good, has won several large supply deals with countries including Indonesia and Brazil – the most populous countries in Southeast Asia and Latin America respectively.

But none of the Chinese drug makers have yet to release detailed efficacy data.

The CNBG vaccine is among the five most advanced candidates from China in terms of development and has been used in its emergency use programme that has vaccinated hundreds of thousands of people since July.

The CNBG unit, called Beijing Biological Products Institute, said in a statement that it had applied to the National Medical Products Administration for conditional approval of the vaccine.

It did not give details such as the number of infections in the trial, what, if any, side effects it identified, how many volunteers were given the vaccine or a placebo.

CNBG, a subsidiary of state-backed China National Pharmaceutical Group (Sinopharm), has another vaccine in late-stage trials and both have been approved for emergency use in China even as studies have not been completed.

UK approves use of 2nd COVID-19 vaccine with easier storage