Shock Trump ban on travel from Europe as virus surges

The Times of Earth, International Edition
0
491 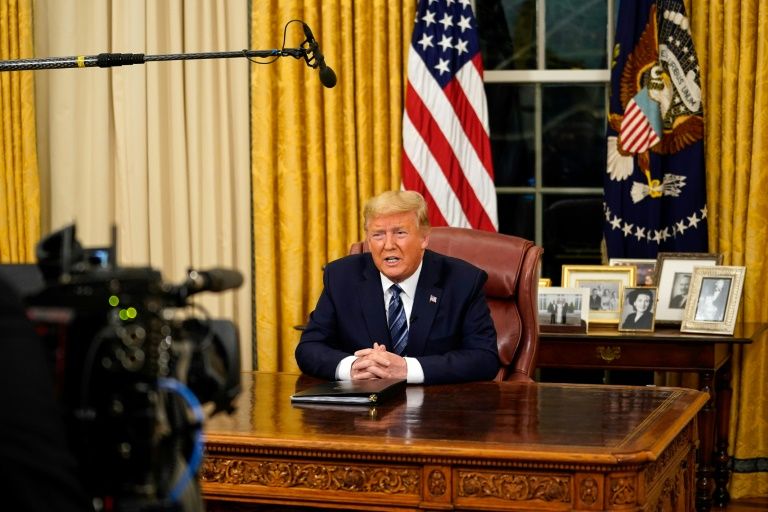 US President Donald Trump announced a shock 30-day ban on travel from mainland Europe over the coronavirus pandemic that has sparked unprecedented lockdowns, widespread panic and another financial market meltdown Thursday.

Trump’s unexpected move in a primetime TV address from the Oval Office pummelled stock markets, as traders fretted about the economic impact of the outbreak that is on a seemingly relentless march across the planet.

The World Health Organization also sounded another global alarm bell Wednesday, officially classifying as a pandemic the virus that has infected more than 126,000 people and killed 4,600, according to Johns Hopkins University.

“This is the most aggressive and comprehensive effort to confront a foreign virus in modern history,” Trump said, after the president had been criticised for his response so far.-

Trump’s ban affects travellers from Europe — but not Britain — as the continent grapples with a burgeoning crisis.

Hardest-hit country Italy on Wednesday clocked more than 2,300 new cases in 24 hours and infections in Spain jumped by a quarter to more than 2,100.

In Germany, Chancellor Angela Merkel quoted experts saying that “60-70 percent of the population will be infected if the situation” continues with no vaccine in sight.

Italy is in the grip of a lockdown never before seen in peacetime, shutting all stores except pharmacies and food shops in a move that has emptied world-famous tourist sites in Rome, Venice and Florence.

People in Italy have been told to keep at least a metre (three feet) from each other and shun handshakes. Many are now talking to each other a few steps apart.

“As soon as the emergency has passed, we will organise a free carbonara day for doctors, nurses and healthcare workers,” said a closing note by a restaurant in Rome’s popular Trastevere neighbourhood.

Following similar stimulus measures taken globally, Trump announced steps aimed at inoculating the world’s top economy from the pandemic, including deferring tax payments for some individuals and businesses — a move he said amounted to $200 billion in liquidity.

But markets still took fright. Australian stocks suffered their worst one-day drop since the 2008 financial crisis, dropping 7.4 percent despite the earlier announcement of a multi-billion-dollar stimulus package in the country.

“Travel restrictions equal slower global economic activity, so if you need any more coaxing to sell sell, sell, sell after a massively negative signal from overnight trading in US markets it just fell in your lap,” said AxiCorp’s Stephen Innes.

Frankfurt and Paris plunged five percent at the open and the London market dropped more than four percent.

White House officials were also forced into a clarification after Trump announced the “tremendous amount of trade and cargo” from Europe would be banned.

Washington later stressed the measures, in effect from “midnight Friday”, would apply only to humans and not goods or cargo.

The State Department later advised Americans to reconsider travel abroad, as Johns Hopkins University’s coronavirus tracker put the number of known US cases at around 1,300, with 36 dead.

The WHO had earlier warned the spread and severity of the illness was due to “alarming levels of inaction.”

“We have never before seen a pandemic sparked by a coronavirus,” WHO chief Tedros Adhanom Ghebreyesus said, adding that its new designation would not change the response to the outbreak.

The majority of cases have been in China, where the outbreak emerged in December, but hotspots have rapidly emerged elsewhere including in South Korea and Iran.

Demonstrating the illness can affect people from all walks of life, Hollywood superstar Tom Hanks announced Thursday that he and his wife had tested positive and were in isolation in a hospital in Australia, where he was shooting a film.

“To play things right, as is needed in the world right now, we were tested for the coronavirus, and were found to be positive,” said the 63-year-old actor.

The pandemic also continued to disrupt cultural and sporting events around the world as authorities tried to prevent large gatherings, including the New York St Patrick’s Day parade, Premier League football and the world’s most important video game trade show.

The virus has fuelled concerns about the fate of the 2020 Olympics in Japan due to start in July, but Tokyo Governor Yuriko Koike said it was “unthinkable” the Games would be cancelled.

One event going ahead is the Australian Formula One Grand Prix, to the surprise of world champion Lewis Hamilton.

“I don’t think it’s great that we have races but it really is shocking that we’re all sitting in this room,” Hamilton said at an official pre-race press conference packed with media.