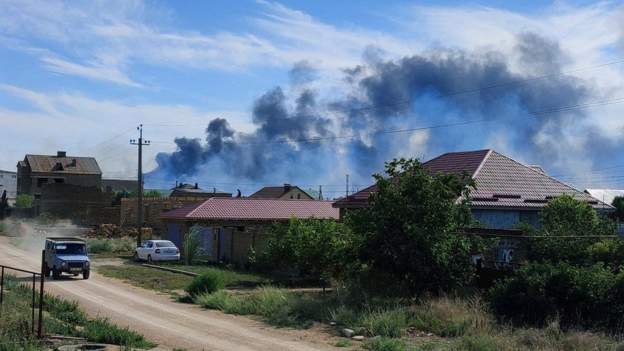 Smoke rises after explosions were heard from the direction of a Russian military airbase near Novofedorivka. REUTERS

More than 20 buildings were damaged in Marganets, he said, a city across the Dnipro river from the Russian-captured Zaporizhzhya nuclear power plant, where there have been other reports of shelling.

The attack damaged a power line, leaving several thousand people without electricity, Reznychenko said. The attack damaged a hostel, two schools, a concert hall, the main council building and other administrative bases, he added.Advertisement · Scroll to continueReport an ad

Russia denies targeting civilians in what it calls its “special military operation” in Ukraine.

Reznychenko initially put the casualties at 21, with 11 killed in the district of Nikopol and 10 in Marganets, but said in a subsequent message on the Telegram messaging app that 11 was the total number, without clarifying which initial details were incorrect.

He later said another two people had died from their injuries.