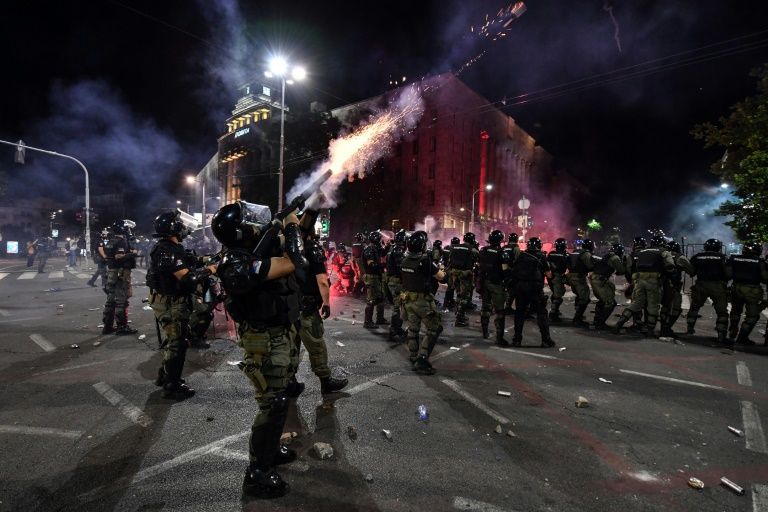 Serbian police said Saturday they have arrested 71 people, including a Briton and a Tunisian, after violence broke out during a protest in Belgrade against the government’s management of the coronavirus pandemic.

Thousands of people demonstrated in several Serbian cities on Friday for a fourth day in row, with protesters hurling stones at police in front of parliament in the capital.

Some protesters also threw firecrackers and chanted nationalist slogans in Belgrade, according to AFP journalists.

“Among those arrested are many foreign nationals from Bosnia, Montenegro but also from Great Britain and Tunisia,” police chief Vladimir Rebic said at a press conference.

Photographs of the British and Tunisian passports of two men were shown on a screen.

According to local media, mostly tabloids close to power, the Briton is 24 years old, while the Tunisian is 54.

“These are the documents with which they entered Serbia,” said Rebic, who added that he intends to examine the influence of “these foreign factors on the violence of the demonstrations”.

“Serbia welcomed them hoping that they would come to have a good time with us, but they came to destroy and attack the police.”

Fourteen police officers were injured in Friday’s clashes, and 130 since the protests began on Tuesday, the police chief said. No figures have been given for the number of injured protesters.

The protesters have vented their frustration with President Aleksandar Vucic, who is seen by many as having facilitated a second wave of the virus by lifting an initial lockdown so that elections could be held on June 21 which his Serbian Progressive Party (SNS) largely won.

The first demonstration on Tuesday was triggered after Vucic announced the return of a weekend curfew to combat a second wave of coronavirus infections that has overwhelmed hospitals in Belgrade.

The president later backtracked on his plan, but the protests continued, turning into a general rebuke of his handling of the health crisis.