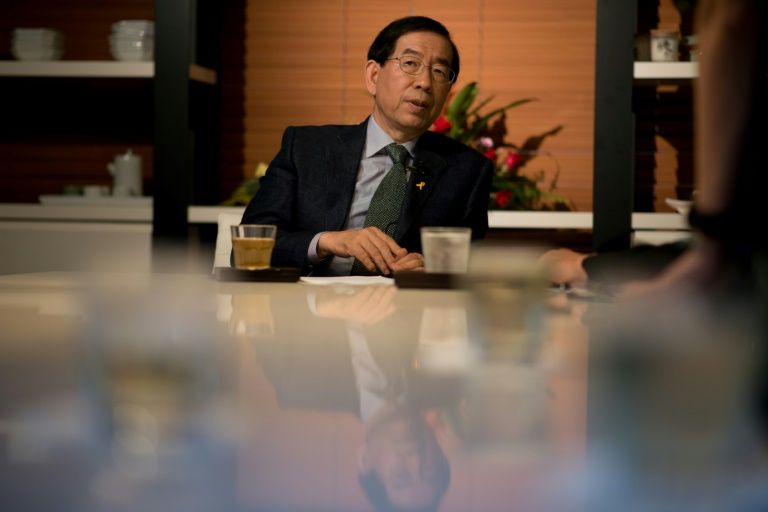 Park’s body was found on a mountain in northern Seoul, police said, after a search by hundreds of officers.

Emergency personnel brought his remains down a path in the early hours of the morning, AFP journalists on site saw, before they were taken to hospital, where women wailed as they arrived.

Police said no suicide note was found at the scene, but Yonhap news agency reported that he was “presumed to have taken his own life”.

If Park does prove to have killed himself he would be the highest-profile South Korean politician to do so since former president Roh Moo-hyun, who jumped off a cliff in 2009 after being questioned over corruption allegations involving family members.

Park’s daughter reported him missing on Thursday afternoon, saying her father had been unreachable for several hours, police said.

He left a message that sounded like “last words” and his phone had been turned off, she told police.

A heavyweight figure in the ruling centre-left Democratic party, Park ran South Korea’s sprawling capital — home to almost a fifth of the national population — for nearly a decade.

He was consistently spoken of as a potential candidate in the race to succeed President Moon Jae-in, and did not deny ambitions on that front when asked by AFP earlier this year.

Park had a similar background to Moon as a student activist in the days of South Korea’s military dictatorship and later a human rights lawyer.

He was kicked out of Seoul National University in 1975, barely a month after entering the prestigious school, for taking part in a rally against then president Park Chung-hee, and jailed for four months.

But he described his time in prison as a happy and productive period that allowed him to formulate his life goals.

After completing his studies, Park went into law and defended many political activists in the 1980s and 1990s.

He helped launch the People’s Solidarity for Participatory Democracy, an influential NGO pushing to reform the conglomerates that dominate South Korean business.

Park also founded the Beautiful Foundation — a philanthropic group that promotes volunteerism and community service — in the hopes of giving people the ability “to feel wonderful and beautiful” by donating to its cause.

It grew into one of the largest non-profit organisations in South Korea and launched the Beautiful Stores, a chain of charity shops modelled after Britain’s Oxfam shops.

Bespectacled and soft-featured, Park was considered a political novice when he first entered the Seoul mayoral race as an independent candidate in 2011 but he defeated Na Kyung-won, the most prominent female lawmaker for the then ruling conservative party.

He subsequently joined the Democratic party and made a name for himself as a three-term mayor of the South Korean capital — his final victory coming in a 2018 landslide when he took more than 50 percent of the vote.

During his campaign, Park — known for his hardworking and down-to-earth character — pledged to create a cleaner city that ensured gender equality, and to bring about peace between North and South Korea.

On his official Twitter account, Park introduced himself as a “Social Designer”, saying: “These days, I… dream of creating Seoul that puts the people first. Please join me in this dream.”

But he also earned a reputation as a workaholic boss, with reports saying a handful of civil servants at the Seoul city government had committed suicide due to work-related stress under him.

Earlier this week he courted controversy by being one of several senior Democratic party politicians to attend the funeral of the mother of Ahn Hee-jung, a former provincial governor convicted of sexual offences last year.

US Supreme Court orders release of Trump records but they may stay ...