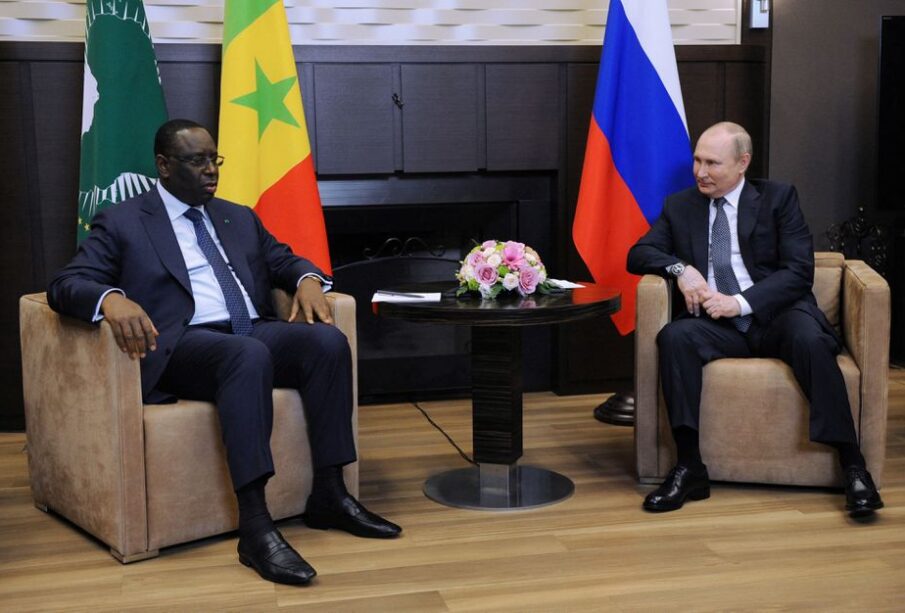 Russia's President Vladimir Putin attends a meeting with Senegal's President Macky Sall, who is currently the chairman of the African Union, at the Bocharov Ruchei state residence in Sochi, Russia June 3, 2022. Sputnik/Mikhail Klimentyev/Kremlin via REUTERS

Senegal’s President Macky Sall said Russia’s Vladimir Putin had told him on Friday he was ready to enable the export of Ukrainian grain to ease a global food crisis that is hitting Africa especially hard.

“President #Putin has expressed to us his willingness to facilitate the export of Ukrainian cereals,” Sall wrote on Twitter after meeting Putin in his role as chairman of the African Union.

Russia was also ready to ensure the export of its own wheat and fertiliser, Sall said after the talks in the Russian Black Sea resort of Sochi on day 100 of Putin’s invasion of Ukraine.

Sall did not say if Putin had attached any conditions to his offer. Russia has previously said it is ready to allow vessels carrying food to leave Ukraine in return for the lifting of some Western sanctions against it, a proposal that Ukraine has described as “blackmail”.

Africa is heavily dependent on grain supplies from Russia and Ukraine that have been badly disrupted by the war.

“I have come to see you, to ask you to be aware that our countries, even far from the theatre (of war), are the victims of this economic crisis,” Sall told Putin earlier.

Russia’s army has seized much of Ukraine’s southern coastline and its warships control access to the country’s Black Sea ports. Yet it continues to blame Ukraine and the West for the resulting halt in Ukrainian grain exports.

Putin told Russian state TV in an interview broadcast on Friday evening that Ukraine could export grain from ports including Odesa if it cleared them of mines.

“Let them remove the mines, we guarantee them free passage to international waters,” he said.

There was no immediate comment from Ukraine. Odesa and the surrounding region have repeatedly been struck by Russian missiles and President Volodymyr Zelenskiy said last month its port was paralysed for probably the first time since World War Two.

Putin said the easiest way to ship out Ukrainian grain would be via neighbouring Belarus, but that would require the West to lift sanctions on Belarus.

Moscow says sanctions are also hitting its own grain and fertiliser exports, aggravating the shortages. Ukraine and Western governments accuse Russia of weaponising the food crisis.

“We are now seeing attempts to shift the responsibility for what is happening on the world food market, the emerging problems in this market, onto Russia. This is an attempt, as our people say, to shift these problems from a sick head to a healthy one,” Putin said.

African countries are acutely affected by the growing crisis, which has sent prices of grains, cooking oils, fuel and fertilizer soaring.

Russia and Ukraine account for nearly a third of global wheat supplies, while Russia is also a key global fertilizer exporter and Ukraine is a major exporter of corn and sunflower oil.