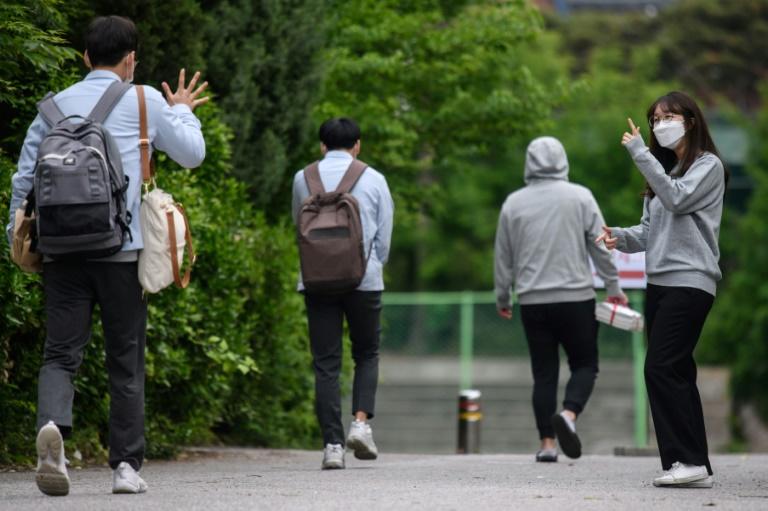 Around 440,000 final-year students are the first to return to school (AFP Photo/Ed JONES)

Hundreds of thousands of South Korean students returned to school on Wednesday as educational establishments started reopening after a coronavirus delay of more than two months.

Students lined up for temperature checks and were given sanitisers to wash their hands as they entered school premises while teachers greeted them with smiles and occasional elbow bumps.

“It’s really exciting to meet my friends and teachers face to face, but we have to strictly follow the disinfection guidelines,” said Oh Chang-hwa, student president of Kyungbock High School in Seoul.

“I am very worried but it’s still nice to see them again,” Oh told AFP.

South Korea endured one of the worst early outbreaks of the virus — at one point the second-worst hit nation after mainland China — prompting officials to delay the reopening of schools in early March.

But it appears to have brought its outbreak under control thanks to an extensive “trace, test and treat” programme.

Around 440,000 final-year students, who will in December take the university entrance exam that is crucial in the education-obsessed country, are the first to return to schools, with other years following in stages over the next several weeks.

Inside the school buildings, students are asked to wipe their desks and sit apart according to social distancing guidelines, with some classes setting up partitions between desks.

But 66 schools in Incheon, near Seoul, were closed soon after re-opening and their students sent back home after two pupils were diagnosed with the virus, a spokesman at the Incheon Metropolitan City Office of Education said.

The episode illustrates the challenge of reopening schools while at the same time seeking to prevent transmission of the virus.

“Concerns over small infection clusters still remain and no one can predict what kind of situation will arise at schools,” education minister Yoo Eun-hae said.

The education ministry began operating a 24-hour emergency situation room this week, Yoo said, adding that any schools that report fresh infections will be shut immediately.

While final-year students are required to come to school every day, younger pupils will shift between online and offline classes to ensure school buildings are not overcrowded.