The Times of Earth, International Edition
0
640 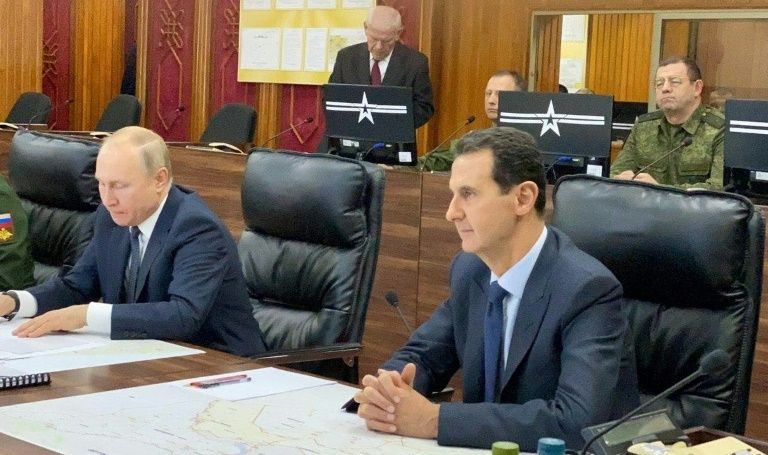 Russian President Vladimir Putin met his Syrian counterpart Bashar al-Assad on Tuesday during a surprise visit to Damascus, his first since the start of the nearly nine-year war, Syria’s presidency said.

“Russian President Vladimir Putin arrived in Damascus for a visit during which he met President Assad at the headquarters of the Russian forces,” it said in a statement.

The two leaders listened to a military presentation by the commander of Russian forces in Syria, said the presidency, which posted a picture of the two leaders shaking hands.

Putin extended his greetings to Russian forces for Orthodox Christmas which is celebrated on January 7.-

He also said enormous progress had been made in the Syrian conflict, Russian news agencies reported.

“In his conversation with Assad, Putin noted that we can now say with confidence that a huge distance has been travelled towards restoring Syrian statehood and the country’s territorial integrity,” the agencies quoted Kremlin spokesman Dmitry Peskov as saying.

Peskov told Interfax, RIA Novosti and TASS that Putin had met Assad at a command post for Russian forces in Syria, driving through Damascus on the way.

“Putin also noted that on the streets of Damascus the signs of how peace has been restored can be seen with the naked eye,” according to Peskov.

He said the two men had heard military reports on the situation in various parts of Syria, where Russia’s armed forces intervened in 2015 in support of Assad.

“The Syrian president expressed appreciation for the help of Russia and the Russian military in the fight against terrorism and the restoration of peaceful life in Syria,” Peskov said.

The Russian leader is expected in Turkey on Wednesday to inaugurate a gas pipeline with Turkish President Recep Tayyip Erdogan.

The Russian leader visited Syria in December 2017 but had not been to the capital, only stopping at the Russian base of Hmeimim on the Mediterranean coast.