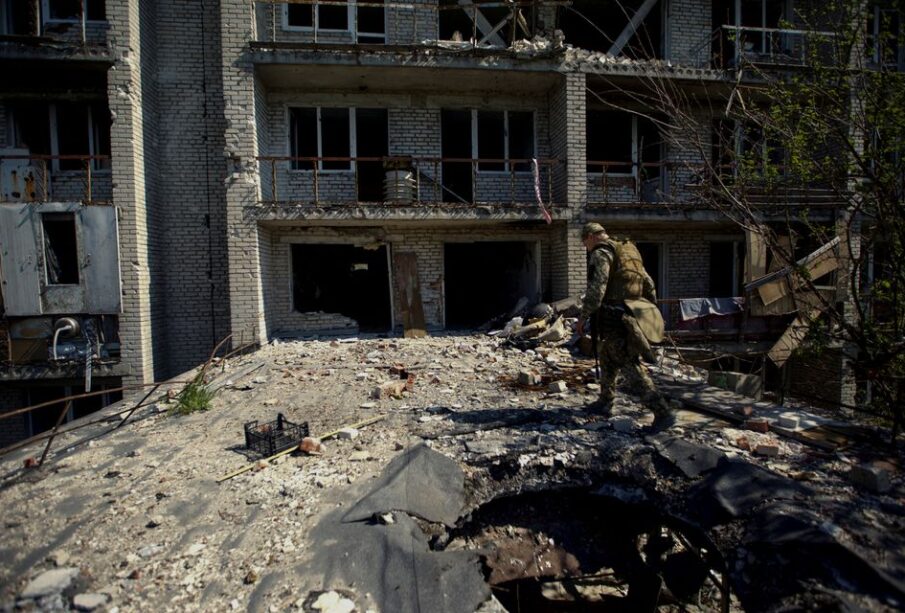 A Ukrainian serviceman inspects a building damaged by a Russian military strike, as Russia's attack on Ukraine continues, in the town of Marinka, in Donetsk region, Ukraine May 28, 2022. REUTERS/Anna Kudriavtseva

Russian troops entered the outskirts of the Ukrainian city of Sievierodonetsk, a regional governor said on Monday, describing the fighting as “very fierce” in a city that become a key objective for Moscow’s offensive in the Donbas.

Incessant shelling has left Ukrainian forces defending ruins in Sievierodonetsk, but their refusal to withdraw has slowed a massive Russian offensive across the Donbas region in eastern Ukraine.

“Some 90% of buildings are damaged. More than two-thirds of the city’s housing stock has been completely destroyed. There is no telecommunication,” Ukrainian President Volodymyr Zelenskiy said in a televised speech.

“Capturing Sievierodonetsk is a fundamental task for the occupiers … We do all we can to hold this advance.”

Russian Foreign Minister Sergei Lavrov on Sunday said the “liberation” of the Donbas, an industrial region which includes Luhansk and Donetsk, was an “unconditional priority” for Moscow.

Ukrainian forces in the Donbas said they were on the defensive all day on Sunday. Russian forces fired on 46 communities in the Donetsk and Luhansk regions, killing at least three civilians, wounding two others or destroying or damaging 62 civilian buildings.

Russian shelling also continued on Sunday across several regions such as in Novy Buh in Mykolaiv and Sumy.

A Ukrainian soldier on patrol in trenches near the town of Bakhmut, southwest of Sievierodonetsk, spoke of a nagging fear that his government could be drawn into negotiating an end to the conflict that would result in Ukraine losing territory.

“You know now what I’m most afraid of, now that the fighting is so intense, so tough?” Dmytro, a former English language teacher, told Reuters television. “That we would be told: That’s it, stop it, we have a ceasefire.”

“A negotiated settlement can only happen on Ukrainian terms and at present if it happened it would be a horror,” he said, adding that such a move could end Zelenskiy’s career.

European Union leaders will meet on Monday and Tuesday to discuss a new sanctions package against Russia including an oil embargo.

EU governments have been unable to agree on a sixth package of sanctions against Moscow because the proposed embargo on Russian oil is not acceptable to Hungary and a big problem for Slovakia and the Czech Republic.

Ahead of the summit, German Economy Minister Robert Habeck expressed fears that EU unity was “starting to crumble” and draft conclusions of the meeting, seen by Reuters, indicated there will be little in terms of new decisions.

But EU foreign policy chief Josep Borrell said “there will be an agreement in the end”, with a deal on the next sanctions package by Monday afternoon.

Having failed to take the capital Kyiv in the early phase of the war, Russia is seeking to consolidate its grip on the Donbas, large parts of which are already controlled by Moscow-backed separatists.

The Ukrainian government urged the West to provide more longer-range weapons to turn the tide in the war, now in its fourth month. Zelenskiy said he expected “good news” in the coming days.

U.S. officials have said such weapons systems are actively being considered. Canada has asked South Korea to supply it with artillery rounds, Seoul said on Monday, apparently to “backfill” supplies that Ottawa has sent to Ukraine.

Analysts at the Institute for the Study of War in Washington said the Russians had still not managed to encircle Sievierodonetsk and the Ukrainian defenders had inflicted “fearful casualties” on them.

The Ukrainians were taking serious losses themselves, civilians as well as combatants, they said in a briefing paper.

Russia’s focus on Sievierodonetsk had drawn resources from other battlefronts and as result they had made little progress elsewhere, the analysts said.