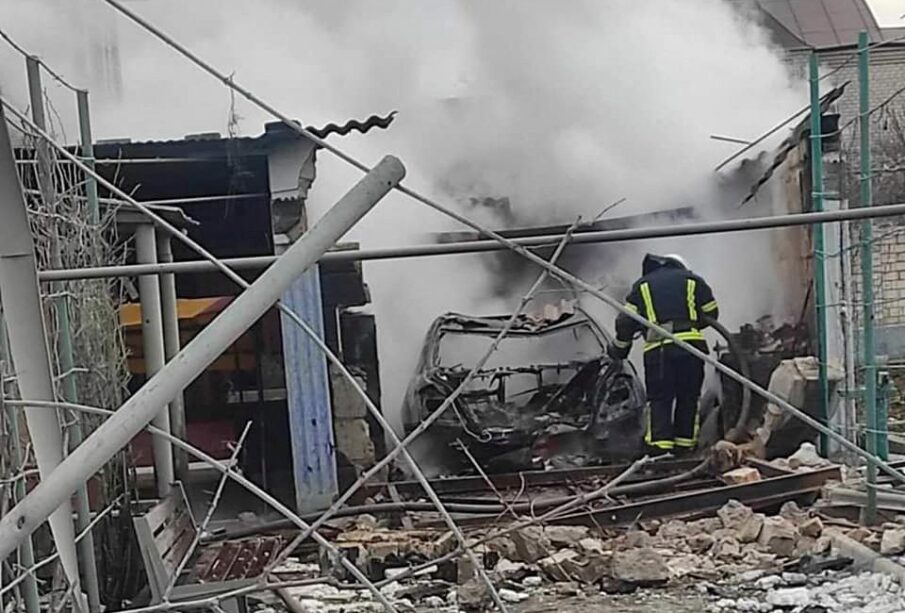 A rescuer is seen next to a residential building damaged by shelling, amid the Russian invasion of Ukraine, in Mykolaiv, Ukraine, in this handout picture released March 8, 2022. Press service of the State Emergency Service of Ukraine/Handout via REUTERS

Russia’s offensive in Ukraine continued but at a significantly slower pace on Tuesday and a second senior Russian commander had been killed, Ukrainian military and intelligence said, as frightened residents fled bombed-out cities.

In the city of Irpin, on the northwest edge of Kyiv, residents ran with their young children in strollers, or cradling babies in arms, while others carried pet carriers and plastic bags and suitcases.

“It’s like a disaster, the city is almost ruined, and the district where I’m living, it’s like there are no houses which were not bombed,” said one young mother, holding a baby beneath a blanket, while her daughter stood by her side.

“Yesterday was the hardest bombing, and the lights and sound is so scary, and the whole building is shaking.”

Ukraine’s military intelligence said on Tuesday that Ukrainian forces killed a Russian general near the besieged city of Kharkiv, the second Russian senior commander to die in the invasion.

Ukraine’s general staff of the armed forces said the Russian offensive continues although at a significantly slower pace.

Russia’s defence ministry could not be immediately reached for comment and Reuters could not verify the reports.

Russia’s invasion, the biggest attack on a European state since World War Two, has created 1.7 million refugees, a raft of sanctions on Moscow, and fears of wider conflict as the West pours military aid into Ukraine.

Russia calls its actions in Ukraine a “special operation” that it says is not designed to occupy territory but to destroy its southern neighbour’s military capabilities and capture what it regards as dangerous nationalists.

Kyiv has rejected Moscow’s offer of possible humanitarian corridors to Russia and Belarus.

However, Moscow has since proposed giving the residents of the cities of Sumy and Mariupol the choice of moving elsewhere in Ukraine on Tuesday, setting a deadline in the early hours for Kyiv to agree, Russian news agencies reported.

After the third attempt to ease the bloodshed at talks in Belarus, negotiators warned not to expect the next round to bring a final result. The Russian and Ukrainian foreign ministers are expected to meet in Turkey on Thursday.

Fears of an energy war between Russia and the West grew on Tuesday after the United States pushed its allies to ban Russian oil imports as punishment for Moscow’s invasion of Ukraine.

Russia warned it could stop the flow of gas through pipelines from Russia to Germany in response to Berlin’s decision last month to halt the opening of the controversial new Nord Stream 2 pipeline. Russia supplies 40% of Europe’s gas.

“We have every right to take a matching decision and impose an embargo on gas pumping through the Nord Stream 1 gas pipeline,” Russian Deputy Prime Minister Alexander Novak said on Monday.

Novak also warned that oil prices could more than double to $300 a barrel if the United States and its allies banned imports of Russian oil, a crucial source of revenue after the country was effectively frozen out of Western financial markets.

Analysts at Bank of America however said that if most of Russia’s oil exports were cut off there could be a shortfall of 5 million barrels per day (bpd) or more, pushing prices as high as $200.

U.S. President Joe Biden held a video conference call with the leaders of France, Germany and Britain on Monday as he pushed for their support to ban Russian oil imports.

But if need be, the United States was willing to move ahead without allies in Europe, two people familiar with the matter told Reuters. Many countries on the continent are heavily reliant on Russian energy.

Japan tightened its sanctions on Tuesday, freezing the assets of an additional 32 Russian and Belarusian officials and executives of companies with close ties to the government.

Estee Lauder Companies Inc (EL.N) joined a long list of firms exiting Russia, suspending all commercial activities and closing all its stores in the country.

A senior U.S. defence official said Putin had now deployed nearly 100% of the more than 150,000 forces that he had pre-staged outside Ukraine before the invasion.

A Russian strike on a bread factory killed 13 in the town of Makariv in the Kyiv region, Ukrainian officials said. Reuters could not verify the details. Russia denies targeting civilians.

In the encircled southern port city of Mariupol, hundreds of thousands of people remained trapped without food and water under regular bombardments.

Guatemala law punishes abortion with prison for up to 25 years