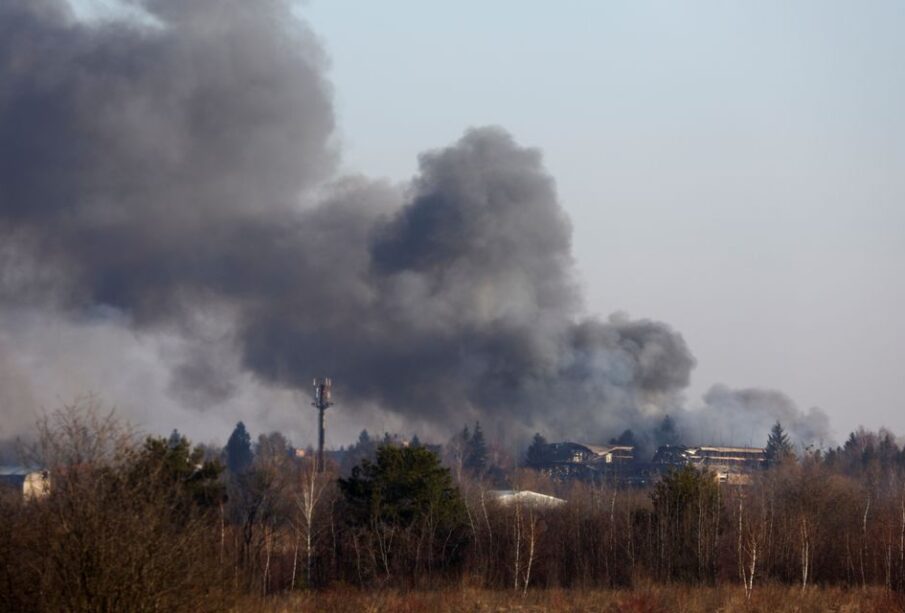 Russian missiles struck an area near the airport of the western Ukrainian city of Lviv early on Friday, the mayor said, while Japan and Australia imposed new sanctions on Russian entities as punishment for the invasion of Ukraine.

Western sources and Ukrainian officials said Russia’s assault has faltered since its troops invaded on Feb. 24, further dashing its expectations of a swift victory and the removal of President Volodymyr Zelenskiy’s government.

Russia has relied heavily on missiles and shelling to subdue Ukraine’s forces but has yet to secure any of its 10 largest cities.

At least three blasts were heard near Lviv’s airport on Friday morning, with videos on social media showing large explosions and plumes of smoke rising.

The city has escaped significant fighting so far.

In the capital, Kyiv, one person was killed and four wounded when parts of a Russian missile fell on a residential building in the northern part of the city on Friday morning, emergency services officials said.

Despite battleground setbacks and punitive sanctions by the West, Russian President Vladimir Putin has shown little sign of relenting.

His government says it is counting on China to help Russia withstand blows to its economy.

The United States, which this week announced $800 million in new military aid to Kyiv, is concerned China is “considering directly assisting Russia with military equipment to use in Ukraine,” Secretary of State Antony Blinken said.

President Joe Biden, who described Putin as a “murderous dictator”, will make clear to Chinese President Xi Jinping in a call Friday that China “will bear responsibility for any actions it takes to support Russia’s aggression”, Blinken told reporters.

China has declined to condemn Russia’s actions in Ukraine or call them an invasion. It says it recognises Ukraine’s sovereignty but that Russia has legitimate security concerns that should be addressed.

A Chinese foreign ministry official met this week with Russia’s ambassador to China to exchange views on counter-terrorism and security cooperation, the ministry said in a statement.

The U.N. human rights office in Geneva said it had recorded 2,032 civilian casualties in Ukraine – 780 killed and 1,252 injured.

Some 3.2 million civilians have fled to neighbouring countries, the United Nations said.

Ukraine hopes to evacuate civilians on Friday through nine humanitarian corridors from cities and towns on the front line of the fighting, Deputy Prime Minister Iryna Vereshchuk said.

A fourth straight day of talks between Russian and Ukrainian negotiators took place on Thursday by videolink, but the Kremlin said an agreement had yet to be reached.

Kyiv and its Western allies say Russia launched the war to subjugate a neighbour Putin calls an artificial state. Russia says it is carrying out a “special operation” to disarm Ukraine.

Rescuers in Mariupol, a southern port city, dug survivors from the rubble of a theatre that officials said had been hit by an air strike on Wednesday as civilians took shelter there from bombardments. Russia denies striking the theatre.

Mariupol has suffered the worst humanitarian catastrophe of the war, with hundreds of thousands of civilians trapped in basements with no food, water or power. City officials say they are not able to estimate the number of casualties from the theatre, which had the Russian word for “children” marked outside and visible on satellite images.

Russia’s foreign ministry spokesperson Maria Zakharova said the assertion that Russia had bombed the theatre was a lie.

Russia’s defence ministry said separatists in east Ukraine with help from Russia’s armed forces were “tightening the noose” around Mariupol and there was fighting in the city centre, Russia’s RIA Novosti news agency reported.

Northeastern and northwestern suburbs of Kyiv have suffered heavy damage but the capital itself has held firm, under occasional curfews and subjected to deadly rocket attacks nightly.

A building in Kyiv’s Darnytsky district was extensively damaged on Thursday. As residents cleared glass, a man knelt weeping by the body of a woman covered in a bloody sheet.

Viacheslav Chaus, governor of the region centred on the front-line northern city of Chernihiv, on Thursday said 53 civilians had been killed in 24 hours. The toll could not be independently verified.

One of those killed was a U.S. citizen, Jimmy Hill, who was gunned down while waiting in a bread line, his family said.