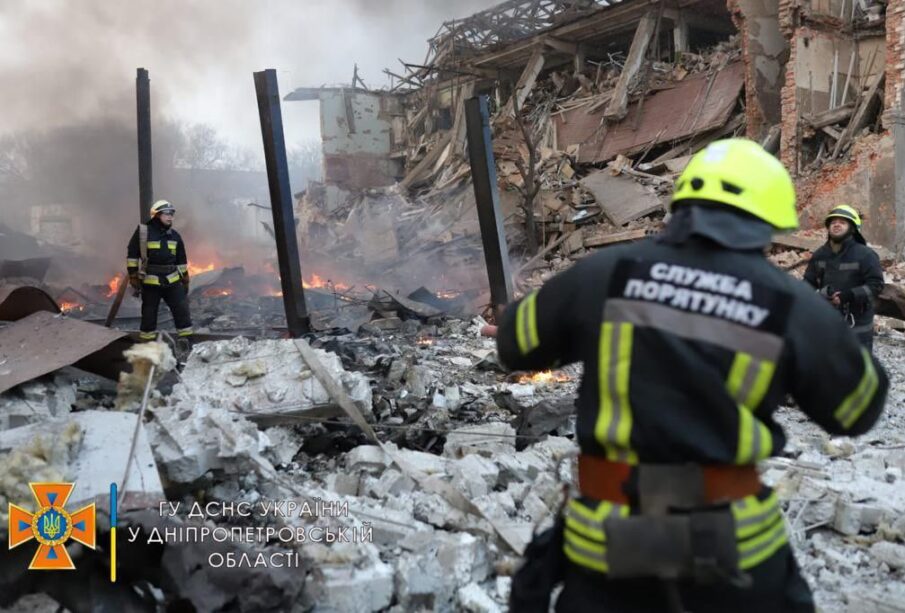 Russian forces are continuing their offensive toward Kyiv on Friday from the northwest and east, notably trying to break through Ukrainian defenses from Kukhari, 90 kilometers (56 miles) to the northwest through to Demidov, 40 kilometers (25 miles) north of Kyiv, the general staff of Ukraine’s armed forces said in a statement.

The general staff said Russian troops had been halted in efforts to take the northern city of Chernihiv, notably by Ukraine’s re-taking of the town of Baklanova Muraviika, which Russian troops could use to move toward Kyiv.

Russian forces are blockading Kharkiv and pushing their offensive in the south around Mykolaiv, Zaporizhzhia and Kryvyi Rih, Volodymyr Zelenskyy’s hometown.

Rough weather on the Azov and Black Seas has stalled Russian ships’ efforts to come ashore, the general staff said.

Three Russian airstrikes hit the important industrial city of Dnipro in eastern Ukraine on Friday, killing at least one person in strikes that hit near a kindergarten and apartment buildings, according to Interior Ministry adviser Anton Herashchenko.

One strike hit a shoe factory, sparking a fire, he said. He released video showing flashes over residential areas of the city, home to nearly 1 million people. ___

WASHINGTON — President Joe Biden will announce Friday that, along with the European Union and the Group of Seven countries, the U.S. will move to revoke “most favored nation” trade status for Russia over its invasion of Ukraine.

That’s according to a source familiar with the matter who spoke on the condition of anonymity to preview the announcement.

Biden’s move comes as bipartisan pressure has been building in Washington to revoke what is formally known as “permanent normal trade relations” with Russia.

The move would allow the U.S. and allies to impose tariffs on Russian imports.

Russia to lose ‘most favoured nation status’ over Ukraine