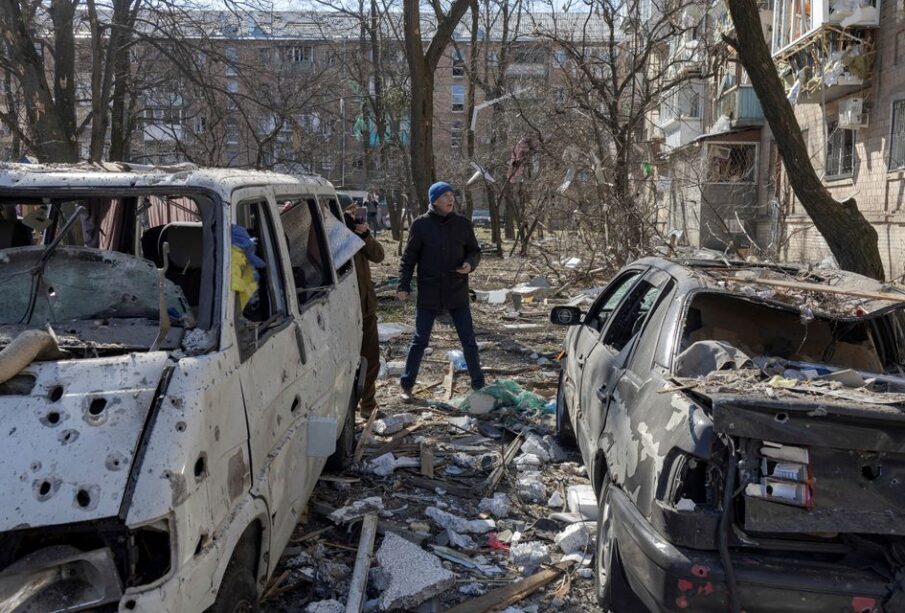 A man walks near destroyed cars in a residential district that was damaged by shelling, as Russia's invasion of Ukraine continues, in Kyiv, Ukraine, March 18, 2022. REUTERS/Marko Djurica

President Volodymyr Zelenskiy called on Saturday for comprehensive peace talks with Moscow to stop its invasion of Ukraine, saying it would otherwise take Russia “several generations” to recover from its losses in the war.

Since President Vladimir Putin launched the assault on Feb. 24, Russian forces have taken heavy losses and their advance has largely stalled.

However they have laid siege to cities, blasting urban areas to rubble, and in recent days have intensified missile attacks on scattered targets in western Ukraine, away from the main battlefields in the north and east of the country.

On Saturday Russia’s defence ministry said its hypersonic missiles had destroyed a large underground depot for missiles and aircraft ammunition in the western Ivano-Frankivs region. Missiles also destroyed Ukrainian military radio and reconnaissance centres near the port of Odesa, the Interfax news agency quoted the ministry as saying.

Reuters was unable to independently verify the reports.

As air raid sirens sounded early on Saturday in the Kyiv, Chernihiv and Zhytomyr regions, there were no immediate reports of fresh attacks, while efforts to evacuate civilians from cities under siege continued.

The governor of the eastern region of Luhansk said there would be a ceasefire on Saturday morning and a humanitarian corridor for evacuations will be opened.

“A ‘regime of silence’ has been agreed for March 19, starting at 9 a.m.” (0700 GMT), Serhiy Gaidai said in a message on Telegram. Luhansk lies in Ukraine’s coal-rich Donbas region that has been partly controlled by Russia-backed separatists since 2014.

Gaidai, the head of the Ukrainian administration in Luhansk, has said 59 civilians have been killed in the region since the start of the war.

Unprecedented Western sanctions aimed at crippling Russia’s economy have yet to halt what Putin calls a “special operation” to disarm and “de-Nazify” its neighbour.

After Russia said it was “tightening the noose” around the besieged port of Mariupol, Ukraine’s defence ministry acknowledged on Friday it had “temporarily” lost access to the Azov Sea, which is a strategic connection to the Black Sea.

Zelenskiy alluded to Russia’s losses in a video address early on Saturday.

“I want everyone to hear me now, especially in Moscow. The time has come for a meeting, it is time to talk,” he said. “The time has come to restore territorial integrity and justice for Ukraine. Otherwise, Russia’s losses will be such that it will take you several generations to recover.”

Russia last acknowledged on March 2 that nearly 500 of its soldiers had been killed; Ukraine says the number by now has reached many thousands. Reuters has not been able to independently verify the death count.

Kyiv and Moscow reported some progress in talks this week towards a political formula that would guarantee Ukraine’s security, while keeping it outside NATO. But Ukraine renewed its calls for an immediate ceasefire and withdrawal of Russian troops, and each side accused the other of dragging out the talks.

Putin promised tens of thousands of people waving Russian flags at a soccer stadium in Moscow on Friday that Russia “will absolutely accomplish all of our plans”.

The United States has repeatedly said Russia may turn for assistance to China, the biggest power that has not condemned the assault.

In a video call on Friday, President Joe Biden told China’s President Xi Jinping there would be “consequences” if Beijing provides “material support” to Russia in Ukraine, the White House said, bringing up sanctioning Beijing was an option.

China and Russia deny Beijing is considering giving Moscow military aid. China says it wants to see an end to the conflict.

More than 3 million refugees have fled over Ukraine’s western border and Ukrainian authorities have been seeking to evacuate civilians from besieged cities via humanitarian corridors. Kyiv said it hoped to open 10 such corridors on Saturday.

Some of the heaviest fighting has been in Mariupol, where hundreds of thousands have been trapped since the first week of war. Officials there say fighting has reached the city centre and that near-constant shelling was preventing humanitarian aid from getting in.

Rescue workers were still searching for survivors of a Mariupol theatre which local authorities say was flattened by Russian air strikes on Wednesday. Russia denies hitting the theatre.

In his video address, Zelenskiy said more than 130 people have been rescued from the rubble but there was no information about how many people had died in the theatre, where hundreds had been sheltering.