The Times of Earth, International Edition
0
236 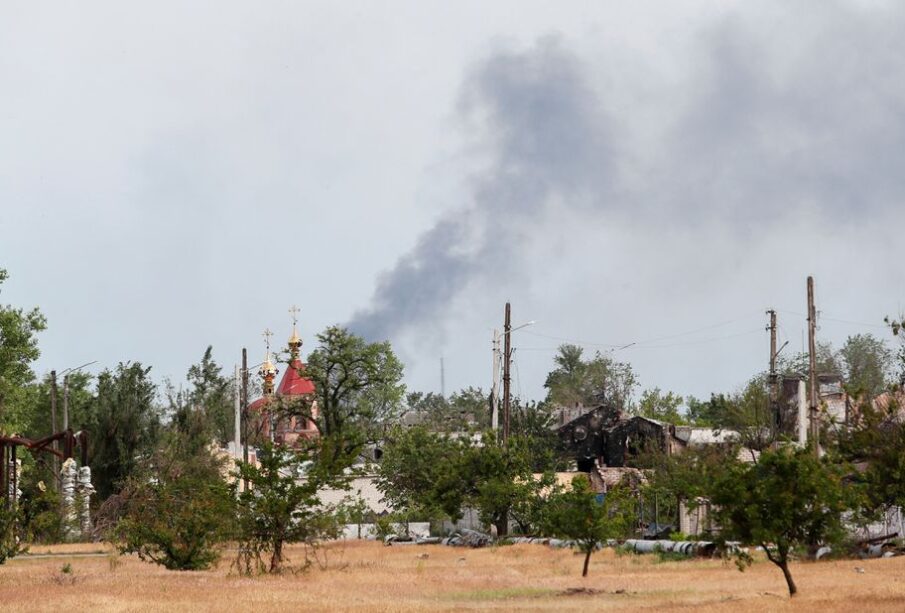 Smoke rises above a church and residential buildings in the course of Ukraine-Russia conflict in the town of Rubizhne in the Luhansk region, Ukraine June 1, 2022. REUTERS/Alexander Ermochenko

Russian forces were attempting to extend and consolidate their hold on Ukraine’s industrial city of Sievierodonetsk on Thursday, edging closer to claiming a big prize in their offensive in the eastern Donbas region.

But in a boost for Ukraine, locked in a grinding struggle against Russia’s invading army, the United States announced a $700 million weapons package for Kyiv that will include advanced rocket systems with a range of up to 80 km (50 miles).

Russia accused the United States of adding “fuel to the fire”. Russian Foreign Minister Sergei Lavrov said the supply of the rocket launchers raised the risk of a “third country” being dragged into the conflict.

U.S. Secretary of State Antony Blinken said Ukraine had promised it would not use the systems to hit targets inside Russia. President Joe Biden hopes extending Ukraine’s artillery reach will help push Russia to negotiate an end to the war, which on Friday marks its 100th day.

After days of heavy fighting around Sievierodonetsk, much of which has been laid to waste by Russian bombardment, Russian troops were inching forward through city streets. Ukraine says about 70% of the city is under Russian control, with Russian troops in the city centre.

“The enemy is conducting assault operations in the settlement of Sievierodonetsk,” Ukraine’s armed forces general staff said on Thursday, adding that Russian forces were also attacking in other parts of the east and northeast.

At least four civilians were killed and 10 wounded in the east and northeast, other officials said.

If Russia fully captures Sievierodonetsk and its smaller twin Lysychansk on the west bank of the Siverskyi Donets river, it would hold all of Luhansk, one of two provinces in the Donbas that Moscow claims on behalf of separatists.

Britain’s defence ministry said in its daily intelligence update that Russia controlled most of the city, which before the war had a population of about 101,000, and that Ukrainian forces had destroyed bridges over the river to Lysychansk.

Capturing all of Luhansk would fulfil one of Russian President Vladimir Putin’s main aims and solidify a shift in battlefield momentum after his forces were pushed back from the capital Kyiv and from northern Ukraine.

Luhansk’s regional governor, Serhiy Gaidai, told Reuters that civilians were sheltering from Russian attacks under a Sievierodonetsk chemical plant that he said was hit by an air strike on Tuesday, releasing a large pink cloud.

“There are civilians there in bomb shelters, there are quite a few of them left,” Gaidai said. Reuters could not independently confirm the account.

About 15,000 people remained in the city, Gaidai said.

Gaidai has warned that Ukrainian troops in Sievierodonetsk could be forced to retreat to Lysychansk, which he said was easier to defend from its vantage on a hill.

Putin sent his troops over the border on what he called a special military operation on Feb. 24 to disarm and “denazify” Ukraine. Ukraine and its allies call this a baseless pretext for a war of aggression and the West has imposed stringent sanctions on Russia in a bid to strangle its economy.

Thousands of people have been killed in Ukraine and millions more displaced since the invasion began.

Amid worries about the global ramifications of the war, Ukraine’s grain traders’ union said this year’s wheat harvest was likely to drop to 19.2 million tonnes from a record 33 million in 2021.

Russia and Ukraine account for nearly a third of global wheat supplies, while Russia is also a key fertilizer exporter and Ukraine a major supplier of corn and sunflower oil.

Biden is due to meet NATO Secretary-General Jens Stoltenberg on Thursday in Washington. Stoltenberg told reporters he would soon convene a meeting in Brussels with Swedish, Finnish and Turkish officials to discuss Turkey’s opposition to Sweden and Finland joining NATO.

The decision to give Ukraine the rocket systems was made after Washington received assurances from Kyiv that it would not use them to hit targets inside Russian territory, which could broaden the war.

Ukraine has been seeking Multiple Rocket Launch Systems such as the M270 and M142 HIMARS to provide more firepower at longer range to hit Russian forces well behind the front line.

The new supplies come on top of billions of dollars worth of equipment such as drones and anti-aircraft missiles. The Biden administration plans to sell Ukraine four MQ-1C Gray Eagle drones that can be armed with Hellfire missiles for battlefield use against Russia, three sources told Reuters.