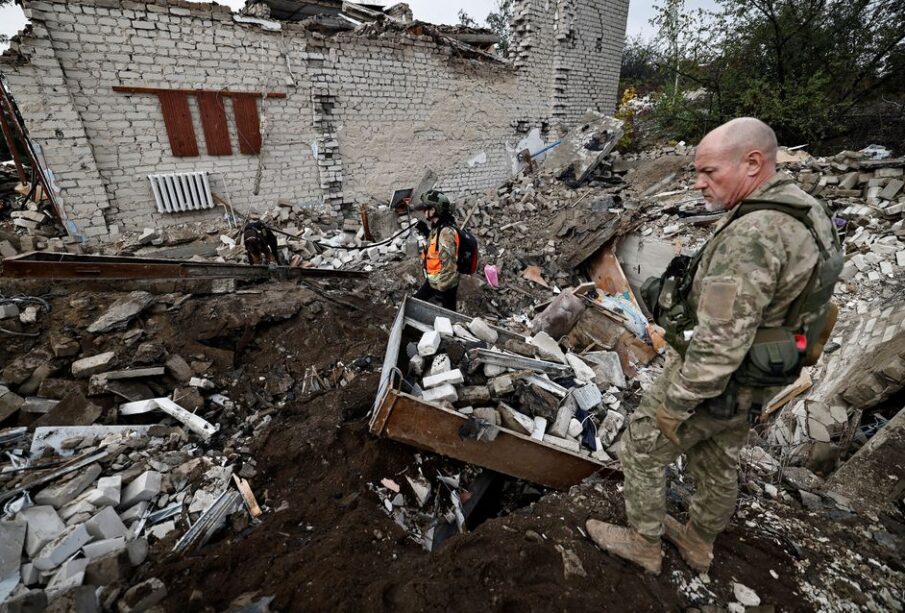 Firefighters and Ukrainian army soldiers search for bodies of people killed during a Russian attack, among the remains of a building beside a TV tower, in the recently liberated town of Izium, Kharkiv region, Ukraine September 28, 2022. REUTERS/ Zohra Bensemra

Russia was poised to annex a swath of Ukraine within days, releasing what it called vote tallies showing overwhelming support in four provinces to join it, after what Ukraine and the West denounced as illegal sham referendums held at gunpoint.

On Moscow’s Red Square, a stage with giant video screens has been set up, with billboards proclaiming “Donetsk, Luhansk, Zaporizhzhia, Kherson – Russia!”

The head of the upper house of the Russian parliament said it could consider the incorporation of the four partially occupied regions on Oct. 4, three days before President Vladimir Putin’s 70th birthday.

The Russian-installed administrations of the four provinces have formally asked Putin to incorporate them into Russia, which Russian officials have suggested is a formality.

“This should happen within a week,” Rodion Miroshnik, the Russia-installed ambassador to Moscow of the self-proclaimed Luhansk People’s Republic, told the RIA state news agency

“The main thing has already happened – the referendum has taken place. Therefore, let’s say: the locomotive has already started and it’s unlikely to be stopped.”

To annex the territories, which represent about 15% of Ukraine, some sort of treaty will need to be struck and ratified by the Russian parliament, which is controlled by Putin allies. The areas will then be seen as part of Russia and its nuclear umbrella will extend to them.

Putin has warned he would use nuclear weapons to protect Russian territory from attack.

Residents who escaped to Ukrainian-held areas in recent days have told of people being forced to mark ballots in the street by roving officials at gunpoint. Footage filmed during the exercise showed Russian-installed officials taking ballot boxes from house to house with armed men in tow.

“They can announce anything they want. Nobody voted in the referendum except a few people who switched sides. They went from house to house but nobody came out,” said Lyubomir Boyko, 43, from Golo Pristan, a village in Russian-occupied Kherson province.

Russia says voting was voluntary, in line with international law, and that turnout was high. The referendums and notion of annexations has been rejected globally, as was Russia’s 2014 takeover of Crimea from Ukraine.

Ukrainian President Volodymyr Zelenskiy sought to rally international support against annexation in a series of calls with foreign leaders, including those of Britain, Canada, Germany and Turkey.

The United States has also said it would also impose new sanctions on Russia for the referendums and the European Union’s executive proposed more sanctions, but the bloc’s 27 member countries will need to overcome their own differences to implement them.

Kremlin spokesman Dmitry Peskov said Russia would need to keep fighting until it had taken control of all of Donetsk. About 40% is still under Ukrainian control.

Russia has announced it will mobilise some 300,000 reservists to bolster its forces in Ukraine. The conscription drive has sent thousands of Russian men fleeing to other countries.

On the ground, Ukraine and Russian forces are engaged in heavy fighting, especially in the Donetsk region, where the governor said six civilians were killed in Russian attacks on Wednesday.

Over the past 24 hours, Russia launched three missile and eight air strikes, carried out more than 82 attacks from rocket salvo systems on military and civilian sites, Ukraine’s military said early on Thursday.

Valentyn Reznichenko, governor of the Dnipropetrovsk region, said three people were killed in Russian shelling of Dnipro, the region’s capital, including a 12-year-old girl, and more than 60 buildings were damaged.

“The rescuers carried her out of the damaged house where was just sleeping when a Russian missile hit,” he said on his Telegram channel.

Reuters was not able to verify battlefield reports.

Leaking gas bubbled up in the Baltic Sea for a third day after suspected explosions tore through undersea pipelines built by Russia and European partners to send natural gas to Europe.

The Nord Stream 1 pipeline, once the main route for Russian gas to Germany, was already shut but cannot now be easily reopened.

NATO and the European Union warned of the need to protect critical infrastructure from what they called “sabotage”, though officials stopped short of assigning blame.

Russia’s FSB security service is investigating the damage to the pipelines as “international terrorism”, the Interfax news agency cited the general prosecutor’s office as saying.

The Nord Stream pipelines have been flashpoints in an expanding energy war between Russia and European countries that has damaged Western economies and sent gas prices soaring.