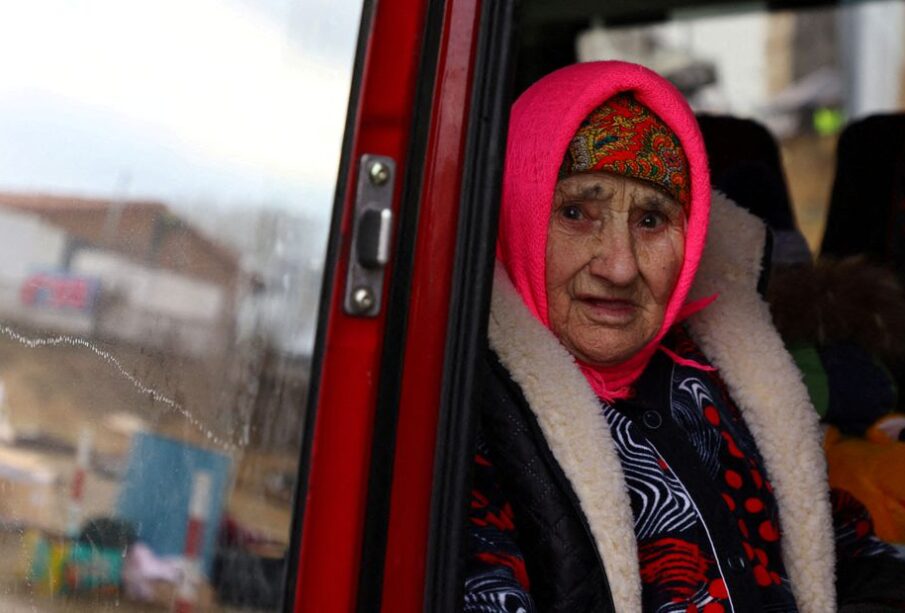 Natasha, 83 years old, who witnessed World War Two, looks out of a shuttle bus after crossing the border from Ukraine to Poland after fleeing from Mykolajiw following the Russian invasion of Ukraine, at the border checkpoint in Medyka, Poland, March 8, 2022. REUTERS/Fabrizio Bensch

Ukraine must hold off Russia’s attack for the next seven to 10 days to deny Moscow claiming any sort of victory, said a senior government official, as more than 2 million refugees fled the biggest assault on a European country since World War Two.

Vadym Denysenko, adviser to Ukraine’s interior minister, said Russia was desperate for at least some kind of victory, citing the cities of Mariupol or the capital Kyiv as the most likely targets.

“They need at least some victory before they are forced into the final negotiations,” Denysenko wrote on Facebook.

Russia said it would provide humanitarian corridors on Wednesday for people fleeing Kyiv and four other Ukrainian cities. The only operating corridor is that from the city of Sumy, which opened on Tuesday.

About 5,000 people rode buses out of the northeastern city on Tuesday after Moscow and Kyiv agreed on the corridor, said Sumy regional governor Dmytro Zhyvytskyy.

About 1,000 cars were also able to leave, moving towards the city of Poltava, he said, adding the corridor would continue to function on Wednesday.

Zhyvytskyy said separately that Sumy’s residential area had been bombed overnight, with one bomb killing 22 civilians. He called the incident “mass murder”.

Zhyvytskyy said the Sumy corridor will continue to function on Wednesday.

Ukraine has accused Russian forces of shelling another evacuation route, from Mariupol in the south of the country.

Mikhail Mizintsev, the head of Russia’s National Defence Control Centre, was quoted as saying by the Tass news agency that Russian forces would “observe a regime of silence” from 10 a.m. Moscow time (0700 GMT) to ensure safe passage for civilians wishing to leave Kyiv, Chernihiv, Sumy, Kharkiv and Mariupol.

It was unclear if the proposed routes would pass through Russia or Belarus, conditions previously opposed by the Ukrainian government.

The Kremlin describes its actions as a “special operation” to disarm Ukraine and unseat leaders it calls neo-Nazis. Ukraine and Western allies call this a baseless pretext for a war of choice that has raised fears of wider conflict in Europe.

The United States banned imports of Russian oil in a major new step in the Western-led effort to halt the war by crippling Russia’s economy, sparking a further increase in the oil price. Prices have surged more than 30% since Russia – the world’s second-largest exporter of crude – invaded its neighbour on Feb. 24. Benchmark Brent crude futures were last at $130.6 per barrel.

Britain said it would phase out the import of Russian oil and oil products by the end of 2022, while the European Union published plans to cut its reliance on Russian gas by two thirds this year.

China’s refusal to condemn the invasion or join the international sanctions is also raising concerns in Western capitals about the potential for a wider attack on liberal democratic values globally.

U.S. Commerce Secretary Gina Raimondo warned that Chinese companies that defied U.S. restrictions against exporting to Russia could be cut off from American equipment and software they needed to make their products.

Washington could “essentially shut” down Semiconductor Manufacturing International Corp (0981.HK) or any Chinese companies that continued to supply chips and other advanced technology to Russia, Raimondo told the New York Times.

Australia’s intelligence chief on Wednesday said there was a “troubling new strategic convergence” between Beijing and Moscow and the risk of “major-power conflict” had grown since Russia invaded Ukraine.

Russia’s attack on Ukraine, a democratic country of 44 million people, has caused particular alarm in self-governed Taiwan, which China claims as its own and has vowed to reclaim, by force if necessary.

U.S. intelligence chiefs told the House of Representatives Intelligence Committee on Tuesday that China appeared to have been unsettled by the difficulties Russia was facing in Ukraine and the strength of the Western reaction.

Adding to Russia’s global isolation, McDonald’s, a symbol of capitalism that opened in Russia as the Soviet Union fell, and coffeehouse chain Starbucks will temporarily close stores, while Pepsi will stop selling its soft drink brands and Coca-Cola is halting business in the country.

Western countries are walking a fine line between using harsh sanctions to stop the war as quickly as possible, while also protecting their fragile economies from rising inflation.

The conflict and ensuing sanctions have played havoc with global supply chains, sending prices soaring not only for food and energy but also key raw materials like aluminium and nickel.

The International Monetary Fund’s executive board is poised to approve $1.4 billion in emergency funding on Wednesday for Ukraine to help it respond to Russia’s invasion.

As Western military aid poured into Ukraine over the Polish and Romanian borders, the United States turned down a surprise Polish offer to transfer MiG-29 fighter jets to a U.S. base in Germany to help replenish Ukraine’s air force.

The prospect of flying combat aircraft from NATO territory into the war zone “raises serious concerns for the entire NATO alliance,” the Pentagon said.

In the seaside Ukrainian town of Mariupol, people were fast running out of electricity, heat, food, and drinking water after more than a week of bombardment, the International Committee of the Red Cross said.

Guatemala law punishes abortion with prison for up to 25 years

Europe Foundation offers to mediate negotiations between Russia and Ukraine