Russia pounds Ukrainian cities, says it is stepping up operations 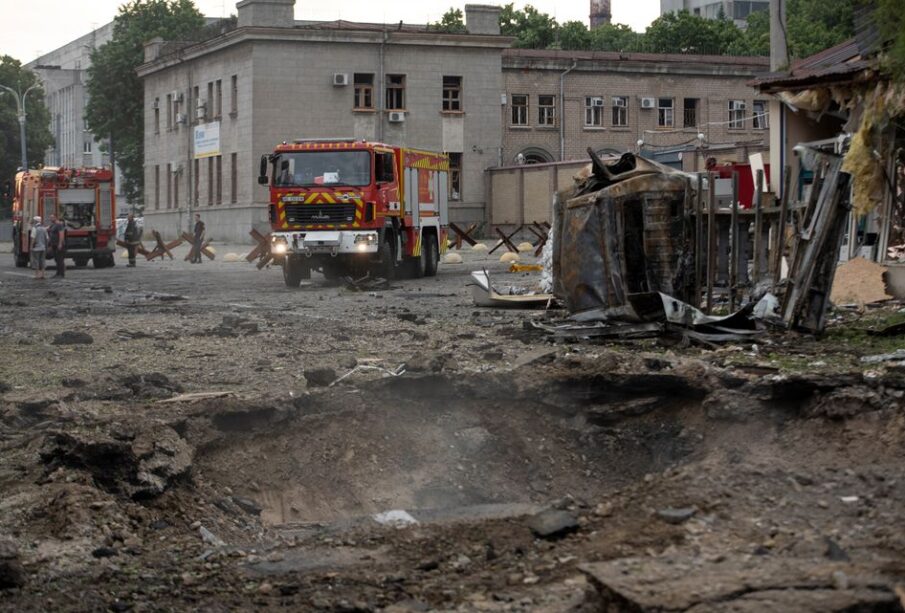 A shell crater in seen after a Russian missile strike, as Russia's attack on Ukraine continues, in Dnipro, Ukraine July 16, 2022. REUTERS/Mykola Synelnykov

Russian rockets hit a southern Ukrainian city on Saturday in the latest in a series of bombardments that Ukraine says have killed dozens of people in recent days, while the defence ministry in Moscow said its forces had been ordered to step up operations.

Two people were killed in the southern city of Nikopol, on the Dnipro River, emergency services said, after the regional governor Valentyn Reznichenko said it was hit by more than 50 Russian Grad rockets.

While the focus of the war, now in its fifth month, has moved to Ukraine’s eastern Donbas region, Russia forces have been striking cities elsewhere in the country with missiles and rockets in what has become an increasingly attritional conflict.

Ukraine’s defence ministry spokesperson said on Friday that only 30% of Russian strikes were hitting military targets, with the rest landing on civilian sites. That assertion could not be verified by Reuters.

Ukraine says around 40 people have been killed in such attacks on urban areas in the last three days.

Late on Friday, Russian missiles hit the city of Dnipro, about 120 km (75 miles) north of Nikopol, killing three people and wounding 15, Reznychenko, governor of the Dnipropetrovsk region that includes both cities, said on Telegram.

Rockets hit an industrial plant and a street next to it, he said. Footage on social media showed thick black smoke rising from the buildings and burning cars.

Russia, which launched what it called its “special military operation” against Ukraine on Feb. 24, saying it aimed to root out what it termed dangerous nationalists, says it uses high-precision weapons to degrade Ukraine’s military infrastructure and protect its own security.

Moscow has accused Ukraine of shelling its own people in territory where it has lost control in the east.

Russia’s defence ministry said in a statement on its website on Saturday that Defence Minister Sergei Shoigu had ordered military units to step up their operations to prevent strikes on eastern Ukraine and other territories controlled by Russia.

It said Shoigu “gave the necessary instructions to further increase the actions of groups in all operational areas in order to exclude the possibility of the Kyiv regime launching massive rocket and artillery strikes on civilian infrastructure and residents of settlements in Donbas and other regions”.

Ukraine says it evacuates as many people as possible from areas seized by Russian forces in what it and the West have cast as an unprovoked attempt to reconquer a country that broke free of Moscow’s rule with the breakup of the Soviet Union in 1991.

Russia has repeatedly denied targeting civilian areas, despite mounting evidence that its missiles have hit residential areas across the country.

In one recent attack that stoked outrage from Ukraine and its Western allies, Kalibr cruise missiles launched from a Russian submarine in the Black Sea hit an office building in Vinnytsia, a city of 370,000 people about 200 km (125 miles) southwest of Kyiv, on Thursday.

Kyiv said the strike killed at least 23 people and wounded dozens. Among the dead was Liza, a 4-year-old girl with Down’s Syndrome, found in the debris next to a pram. Images of her pushing the same pram, posted by her mother on a blog less than two hours before the attack, quickly went viral.

Russia’s defence ministry has said the strike on Vinnytsia was directed at a building where top officials from Ukraine’s armed forces were meeting foreign arms suppliers.

Despite the bloodshed, both sides have described progress towards an agreement to lift a blockade restricting the export of Ukrainian grain amid warnings the conflict is exposing millions globally to the risk of starvation. Mediator Turkey has said a deal could be signed next week.

Asked if that timeline was realistic, a senior Ukrainian source told Reuters on Friday: “We really hope so. We’re hurrying as fast as we can.”

Russia’s defence ministry said an agreement was close, but Moscow’s negotiator cautioned that a grain deal would not lead to a resumption of peace talks.

A deal would probably involve inspections of vessels to ensure Ukraine was not bringing in arms and guarantees from Western countries that Russia’s own food exports were exempt from sanctions.

The war has dominated a meeting of G20 finance ministers in Indonesia. Two sources said the group was unlikely to issue a formal communique on Saturday. Russia is a member, as are the G7 industrial powers, along with China, India and South Africa, among others.

Western sources said earlier this week it would be difficult to agree on a communique because the body works on the basis of consensus and Russia had blocked language about the cause of the global economic downturn.

Wildfires rage in France and Spain as heatwaves sweep Europe