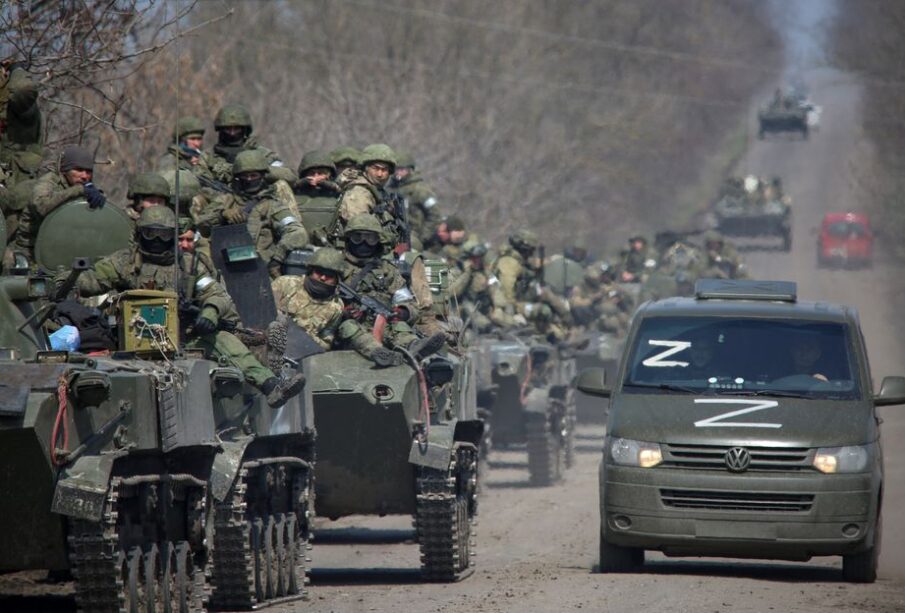 Service members of pro-Russian troops ride on armoured vehicles in the course of Ukraine-Russia conflict on a road leading to the city of Mariupol, Ukraine April 15, 2022. REUTERS/Chingis Kondarov

Russia’s warplanes bombed Lviv and its missiles struck Kyiv on Saturday, as Moscow followed through on a threat to launch more long-range attacks on Ukrainian cities after the sinking of its Black Sea Fleet flagship.

An explosion was heard and smoke seen in Kyiv’s southeastern Darnytskyi district, where Moscow said it had struck a factory that repairs tanks. The capital’s mayor said rescuers and medics were working there but gave no further details.

Ukraine’s military said Russian warplanes that took off from Belarus had also fired missiles at the Lviv region near the Polish border, where four cruise missiles were shot down by Ukrainian air defences.

Russia said it also struck a military vehicle repair factory in Mykolaiv, a city close to the southern front.

The attacks followed Russia’s announcement on Friday that it would intensify long-range strikes in retaliation for unspecified acts of “sabotage” and “terrorism”, hours after it confirmed the sinking of its Black Sea flagship, the Moskva.

Kyiv and Washington say the ship was hit by Ukrainian missiles, a striking display of Ukraine’s military success against a far better-armed foe. Moscow says it sank after a fire.

A month and a half into President Vladimir Putin’s invasion of Ukraine, Russia is trying to capture territory in the south and east after withdrawing from the north following a massive assault on Kyiv that was repelled at the capital’s outskirts.

Russian troops that pulled out of the north left behind towns littered with bodies of civilians, evidence of what U.S. President Joe Biden this week called genocide – an attempt to erase Ukrainian national identity.

Russia denies targeting civilians and says the aim of what it calls its “special military operation” is to disarm its neighbour, defeat nationalists and protect separatists in the southeast.

Ukrainian troops are still holding out in the ruins of the besieged coastal city of Mariupol, scene of the war’s heaviest fighting and worst humanitarian catastrophe, where tens of thousands of civilians have been trapped for seven weeks under bombardment.

“The situation in Mariupol is difficult… Fighting is happening right now. The Russian army is constantly calling on additional units to storm the city,” defence ministry spokesperson Oleksandr Motuzyanyk told a televised briefing.

Russia has been sending additional troops to try to drive Ukrainian forces out of the Donbas, two provinces in the south-east which Moscow demands be fully ceded to Russian-backed separatists it has backed since 2014. Ukraine says it has so far held off Russian advances there.

One person was killed and three wounded in shelling in Luhansk, one of the two Donbas provinces where Russia is trying to advance, Governor Serhiy Gaidai said in an online post.

A gas pipeline was damaged in the frontline towns of Lysychansk and Severodonetsk, which were without gas and water, Gaidai said in a post on the Telegram messaging app.

“Evacuate, while it is still possible,” Gaidai said. Buses were ready for those willing to leave.

Ukraine gained the upper hand in the early phase of a war many Western military experts had predicted it would quickly lose. It has successfully deployed mobile units armed with anti-tank missiles supplied by the West against huge Russian armoured convoys confined to roads by muddy terrain.

But Putin appears determined to capture more Donbas territory to claim victory in a war that has left Russia subject to increasingly punitive western sanctions and with few foreign allies.

All independent media has been shut at home, opposition figures have been jailed or driven abroad and dissent effectively stamped out.

Ukraine’s President Volodymyr Zelenskiy said about 2,500 to 3,000 Ukrainian troops have been killed in seven weeks of war, compared to up to 20,000 Russian troops.

Moscow has given no updates on its military casualties since March 25, when it said 1,351 had died. Western estimates of Russian losses are many times higher. There are few independent estimates of Ukrainian military losses.

Ukraine says it is impossible to count civilian deaths, estimating tens of thousands have been killed in Mariupol alone. Around a quarter of Ukrainians have been driven from their homes, including a tenth of the population that has fled abroad.

Zelenskiy said the military situation in the south and east was “still very difficult”.

“The successes of our military on the battlefield are really significant, historically significant. But they are still not enough to clean our land of the occupiers. We will beat them some more,” he said in a late-night video address.

Zelenskiy has appealed to Biden for the United States to designate Russia a “state sponsor of terrorism,” joining North Korea, Cuba, Iran and Syria, the Washington Post reported.