The Times of Earth, International Edition
0
529 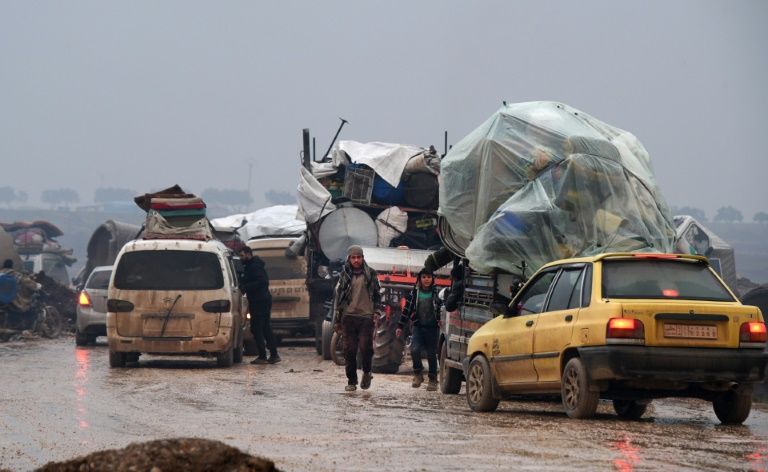 A Russia-backed Syrian regime offensive on the last major rebel bastion in the country’s northwest has displaced more than 800,000 people since December, the United Nations said on Thursday.

“Of the more than 800,000 people who have been displaced in northwest Syria from 1 December 2019 to 12 February 2020, some 60 percent are estimated to be children,” said the United Nation’s humanitarian coordination office, OCHA.

The Idlib region, including parts of neighbouring Aleppo province, is home to some three million people, half of them already displaced from other parts of the country.

It has become a refuge in recent years for people fleeing or being evacuated from previously rebel-held areas elsewhere in Syria.-

But now that Idlib is under attack, there is nowhere left to go.

AFP correspondents in Idlib have seen vast convoys of families with their mattresses stacked on trucks trekking across the war-torn province, amid an unusually bitter winter.

Many are sleeping in cars and in fields despite snowfall and sub-zero temperatures, raising fears of a major humanitarian catastrophe.

OCHA estimated that some 82,000 people are sleeping in the open air.

“Shelter is the most urgent need, as millions of people have been pushed into small areas not equipped to support that many people, especially during the cold winter,” OCHA said.

It called the situation in Idlib “one of the worst” crises in the nine-year war.

The conflict in Syria has killed more than 380,000 people since it erupted in 2011 following the brutal repression of popular demonstrations demanding regime change.

More than half of Syria’s population had already been displaced, but the latest regime offensive against the country’s last rebel enclave has sent the numbers soaring again.

Aid organisations have called for a halt to the violence.