The Times of Earth, International Edition
0
830 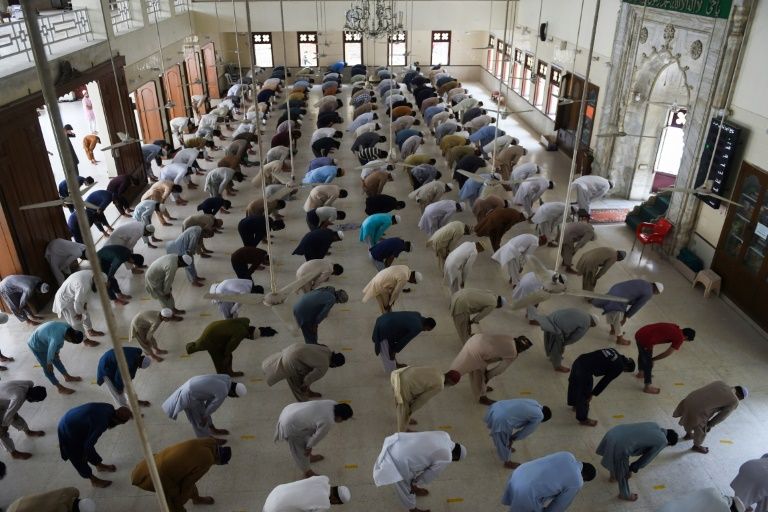 Across Asia, home to about half of the world’s Muslims, the coming Islamic holy month of Ramadan is on a collision course with the coronavirus pandemic as clerics call on the faithful to cram into mosques.

Authorities have tried to limit the fallout during the sacred period of fasting, which starts Thursday, but in many cases religious leaders have brushed aside concerns about activities that could spread COVID-19.

In Bangladesh, clerics lashed out at attempts to reduce the number of people going to mosques, and demanded the country’s secular government allow millions of Muslims to join daily and weekly prayers.

“The quota on the number of worshippers imposed by the government is not acceptable to us. Islam does not support imposition of any quota on worshippers,” said Mojibur Rahman Hamidi, a senior member of the hardline Hefazat-e-Islam group.

Islamic leaders in Bangladesh, where tens of thousands of people defied a nationwide lockdown Saturday to attend the funeral of a top preacher, reminded people it is “mandatory” for a healthy Muslim to attend prayers in a mosque.

Authorities have buckled under religious pressure, allowing daily prayers and evening congregations at mosques after clerics promised to instruct religious leaders to clean their facilities regularly.

In the run-up to Ramadan, mosques have been filling up across Pakistan with hundreds attending Friday prayers, sitting shoulder to shoulder and paying little heed to social distancing.

“I will take all the preventive measures, washing my hands and using my mask but it doesn’t mean I will stop attending prayers, especially during Ramadan,” taxi driver Zubair Khan told AFP in the northwestern city of Peshawar.

The virus threat at large religious congregations has been highlighted in recent weeks by three waves of infections in Asia, linked to separate, massive Islamic congregations in Malaysia, Pakistan and India.

Asia is home to some of the world’s largest Muslim populations stretching from the Indonesian archipelago to the Hindu Kush mountains of Afghanistan, and close to a billion Muslims live in the region.

Regional death tolls from COVID-19 have been much smaller compared with Europe and the United States but are rising steadily, sparking fears the virus may overwhelm often underfunded healthcare sectors.

The coronavirus pandemic has triggered lockdowns throughout Asia, with schools shut and businesses closed, but mosques have largely stayed open.

During Ramadan, mosques hold regular prayers and large “iftar” meals to break the fast at dusk, while families host feasts at home with relatives and friends.

In Southeast Asia, there has been fierce debate in food-mad Malaysia about whether to allow popular Ramadan bazaars, where Muslims buy local delicacies before breaking their fasts.

Malaysia has imposed a nationwide coronavirus lockdown, and the government last week said that to ensure social distancing, they would only allow so-called “e-bazaars”, where people order goods online from local vendors which are then delivered to their homes.

Some signs suggest the order may not be respected — authorities in the northern state of Perlis have said they will allow food traders to operate from home and on the roadside, potentially increasing the chance of crowds gathering.

Hadi Azmi, a 31-year-old video editor, said he understood the need for restrictions but he also felt “trapped”.

“I feel weird as the fasting month approaches because we have to remain indoors and we cannot meet our parents and siblings to break fast and pray together,” he told AFP.

And in Indonesia, a possible explosion in coronavirus cases when millions travel to hometowns and ancestral villages after Ramadan has forced the country’s president to issue a ban on the annual exodus.

Like Christmas or the Chinese Lunar New Year, the movement kicks off an extended holiday when many Indonesians celebrate Eid al-Fitr with their families to mark the end of Ramadan.

The government has called on residents of major cities, including the capital Jakarta, to stay put, and on Tuesday President Joko Widodo said he would ban any mass migration.

Researchers at the University of Indonesia have warned the travel rush could lead to one million infections in the densely populated Java island alone and an eye-watering 200,000 deaths.

“If you care about your loved ones, stay where you are until all this ends,” Ridwan Kamil, governor of 50-million strong West Java province, said recently.

“I’m sad that I won’t see my family for Eid, but I’m trying to stay optimistic,” Gustiansyah told AFP.

“This is just a delay. That’s what I’m telling myself.”

Donald Trump says he will suspend all immigration to the US to ...

Nissan to close global HQ, other Japan sites through May 10 due ...