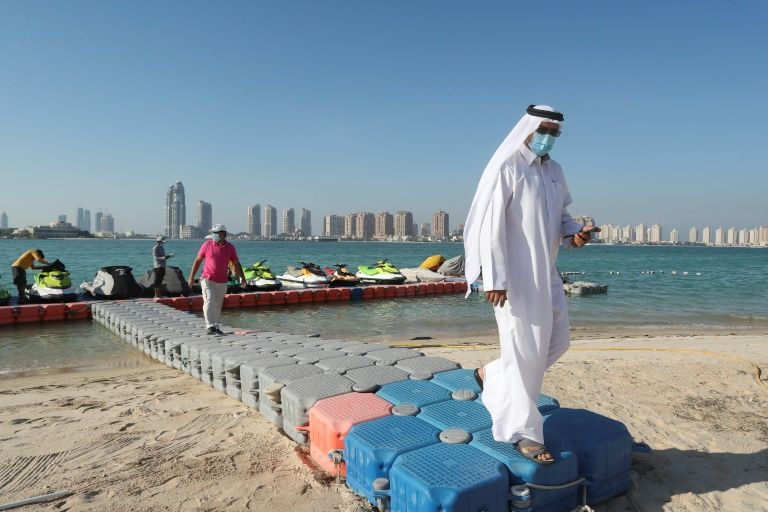 More than 3.5 percent of Qatar's 2.75 million population has been infected with COVID-19 (AFP Photo/KARIM JAAFAR)

Residents of Qatar cautiously returned to beaches on Wednesday as the Gulf state, with one of the world’s highest per capita coronavirus infection rates, continued to relax restrictions.

Sun-lovers and jet-ski enthusiasts braved temperatures of 39 degrees Celsius (102 Fahrenheit) at Doha’s Katara Cultural Village, one of the city’s most popular public beaches.

More than 3.5 percent of Qatar’s 2.75 million population has been infected with the COVID-19 disease, according to official figures, with 115 deaths.

But the average daily number of new infections for the past seven days was down to 889, from 1,086 a week earlier.

“We spent a lot of time waiting and it’s an amazing moment for me — a special one,” said Qatari Ali al-Khelaifi, as he prepared to launch his jet-ski for the first time since water sports were suspended in March as part of measures to slow the spread of the virus.

Around him, other beach-goers slathered themselves with sun-tan oil, while children built sandcastles in socially-distanced areas demarcated with rope.

“Very glad that we’re back, and we like the experience so much — the weather is fantastic,” said Egyptian resident Fatma Khatei, who was at Katara beach with her family.

“For me, the lockdown was not so long because I could go to malls, but this is the first day for my kids. They cannot believe that they are back again to normal life.”

Elsewhere in the city, dozens of Doha’s ubiquitous luxury 4X4s queued near a popular row of food trucks that had also re-opened on Wednesday for the first time in months.

Qatar has also eased restrictions on access to parks and mosques, and allowed cafes and restaurants to resume dine-in services, but with strict regulations.

Masks remain compulsory in public for those not exercising and private gatherings are limited to five people.