Putin warns West of lightning retaliation for intervention in Ukraine 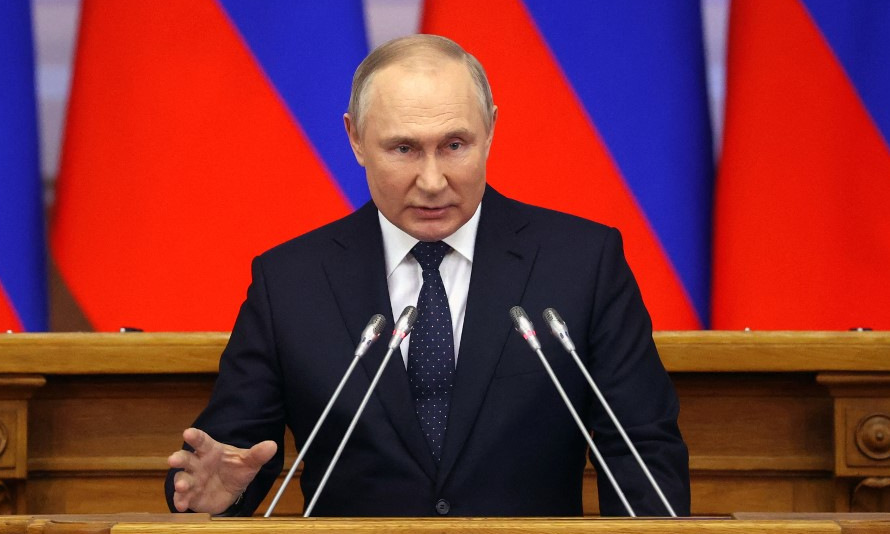 Russian President Vladimir Putin gives a speech at a meeting of advisory council of the Russian parliament in Saint Petersburg on April 27, 2022. (Photo by Alexandr Demyanchuk / SPUTNIK / AFP)

Russian President Vladimir Putin warned of lightning-fast retaliation if countries interfere in Ukraine, while U.S. President Joe Biden was set to comment on Thursday in support of Ukraine’s fight against “Russia’s brutal war”.

Russia has told the United States to stop sending arms to Ukraine, saying large Western deliveries of weapons were inflaming the conflict.

Addressing lawmakers in St Petersburg on Wednesday, Putin said the West wanted to cut Russia up into different pieces and accused it of pushing Ukraine into conflict with Russia.

“If someone intends to intervene in the ongoing events from the outside, and create strategic threats for Russia that are unacceptable to us, they should know that our retaliatory strikes will be lightning-fast,” said Putin, according to video of his address supplied by Russian media.

“We have all the tools for this, things no one else can boast of having now. And we will not boast, we will use them if necessary. And I want everyone to know that.”

Russia’s invasion of Ukraine began on Feb. 24 and has reduced towns and cities to rubble and forced more than 5 million people to flee abroad.

Western countries have responded with sanctions and weapons for Ukraine to fight a war that has brought fears of wider conflict in the West, unthought-of for decades.

Russia calls its intervention a “special operation” to disarm Ukraine and protect it from fascists. Ukraine and the West says this a false pretext for an unprovoked war of aggression by Putin.

Biden will deliver remarks on Thursday in support of “Ukrainians defending their country and their freedom against Russia’s brutal war”, the White House said.

While Russia presses its military assault in eastern and southern Ukraine, its economic battle with the West threatens gas supplies to Europe and is battering the Russian economy as it struggles with the worst crisis since the 1991 fall of the Soviet Union.

Ukraine said Europe should stop depending on Russia for trade after it halted gas supplies to Bulgaria and Poland for not paying in roubles.

“The sooner everyone in Europe recognises that they cannot depend on Russia for trade, the sooner it will be possible to guarantee stability in European markets,” Ukrainian President Volodymyr Zelenskiy said late on Wednesday.

Germany, the biggest buyer of Russian energy, hopes to stop importing Russian oil within days but warned that a Russian energy embargo or blockade would tip Europe’s largest economy into recession.

Gazprom (GAZP.MM), Russia’s gas export monopoly, suspended gas supplies to Bulgaria and Poland on Wednesday for not paying in roubles, a move aimed to soften the impact of sanctions.

While the president of the European Commission said Gazprom’s suspension was “yet another attempt by Russia to use gas as an instrument of blackmail”.

France will host a meeting of EU energy ministers on May 2.

Kremlin spokesperson Dmitry Peskov said Russia remained a reliable energy supplier and denied it was engaging in blackmail. He declined to say how many countries had agreed to pay for gas in roubles.

Sanctions are taking a heavy toll on Russia, with its economy ministry indicating in a document the economy could shrink by as much as 12.4% this year.

Canadian lawmakers voted unanimously on Wednesday to call Russia’s attacks in Ukraine a “genocide”, with members of parliament saying there was “ample evidence of systemic and massive war crimes against humanity” being committed by Russia.

Since the Russian invasion force was driven back at the outskirts of Kyiv last month, Moscow has refocused its operation on eastern Ukraine, starting a new offensive to fully capture two provinces known as the Donbas.

Russia’s Black Sea fleet retains the ability to strike Ukrainian and coastal targets, despite its losses of the landing ship Saratov and the cruiser Moskva, Britain’s defence ministry said.

About 20 Russian navy vessels, including submarines, are in the Black Sea operational zone, the ministry said on Twitter.