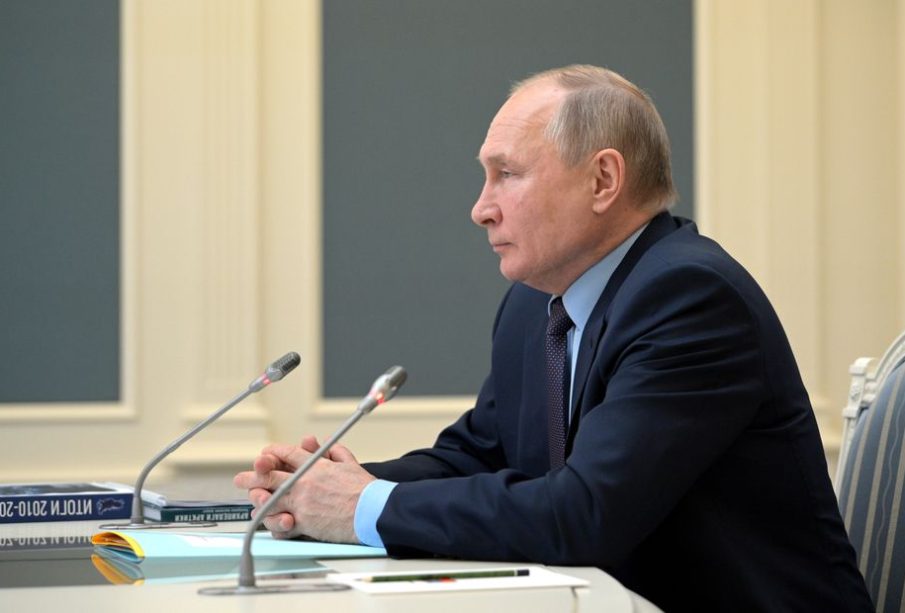 Russian President Vladimir Putin attends a session of the board of trustees of the Russian Geographical Society via a video conference call in Moscow, Russia April 14, 2021. Sputnik/Alexei Druzhinin/Kremlin via REUTERS

President Vladimir Putin warned foreign rivals on Wednesday against “crossing the red line” with Russia, as he gave a key speech amid deep tensions with the West and arrests of opposition protesters.

Addressing lawmakers and senior officials in his annual state of the nation address, Putin said Russia would respond swiftly and harshly to moves against its interests and condemned what he said had been a coup attempt in ally Belarus.

“The organisers of any provocations threatening the fundamental interests of our security will regret their deeds, more than they have regretted anything in a long time,” Putin said.

He hailed Russia’s battle against the coronavirus and development of vaccines and, with parliamentary elections due later this year, announced a raft of populist social spending measures.

As Putin spoke, protesters gathered for a series of nationwide demonstrations called in support of jailed Kremlin critic Alexei Navalny, who is on hunger strike in a Russian penal colony.

Several thousand people gathered in parts of eastern Russia ahead of evening demonstrations in Moscow and Saint Petersburg, with police moving quickly to make arrests, including of two of Navalny’s key aides.

Putin unsurprisingly made no mention of Navalny in his speech — he has always refused to use the name of his most prominent opponent.

He did however hit out at rivals abroad, with Moscow and Western capitals at loggerheads over Navalny, a Russian troop build-up on Ukraine’s borders and a series of espionage scandals that resulted in diplomatic expulsions.

Putin said it had become “a new kind of sport” in some foreign capitals to blame Russia “for anything”.

He said Russia wanted good relations with everyone, but warned of an “asymmetrical, swift and harsh” response if that was seen as a weakness.

“I hope that no one will think of crossing the red line in relation to Russia. And where it will be — we will determine that ourselves,” Putin said.

Putin also backed claims by Belarusian President Alexander Lukashenko that his security services had thwarted an alleged US plot to assassinate him, suggesting there had been a “coup attempt” and accusing the West of pretending “that nothing is happening”.

Putin is due to meet Lukashenko — who has faced down historic protests since a disputed re-election last summer — in Moscow on Thursday, amid speculation of a major announcement on Russia’s policy towards its ex-Soviet neighbour and ally.

Putin began his speech by hailing the country’s response to the Covid-19 pandemic, describing Russia’s development of three vaccines as a “real breakthrough” and saying the country was aiming for herd immunity by autumn.

Much of the address was devoted to new social spending, as Putin looked to shore up support for his deeply unpopular United Russia party ahead of parliamentary elections in September.

“The main thing is to ensure the growth of citizens’ real incomes,” he said, announcing new financial support schemes for families.

Navalny’s supporters were hoping to steal Putin’s thunder on Wednesday with a series of mass protests starting from 7 pm in cities across the country.

Demonstrations took place in cities including Vladivostok in the Far East, and Novosibirsk, Irkutsk and Tomsk in Siberia.

OVD Info, an NGO that tracks arrests at opposition rallies, said at least 198 people had been detained across the country.

Security was tight in Moscow, where Navalny ally Lyubov Sobol and his spokeswoman Kira Yarmysh were detained in the morning.

Navalny’s team called for the demonstrations to coincide with Putin’s speech, after the opposition figure’s doctors said he was suffering from a range of ailments in prison and could die at “any minute”.

Navalny was detained when he returned to Russia in January after months recovering in Germany from a near-fatal nerve agent poisoning he blames on the Kremlin — an accusation it rejects.

He was sentenced to two-and-a-half years on old fraud charges his supporters say were politically motivated and has been serving time in a penal colony about 100 kilometres (60 miles) east of Moscow.

His health has been failing since he launched a hunger strike three weeks ago.

The European Union and the United States have imposed sanctions on Russia over Navalny’s poisoning, and on Monday threatened Moscow with further penalties in the event of his death.

During his speech last year, Putin set out a series of constitutional reforms that were eventually approved in a referendum and reset presidential terms so he could run twice more after the end of his current six-year term.