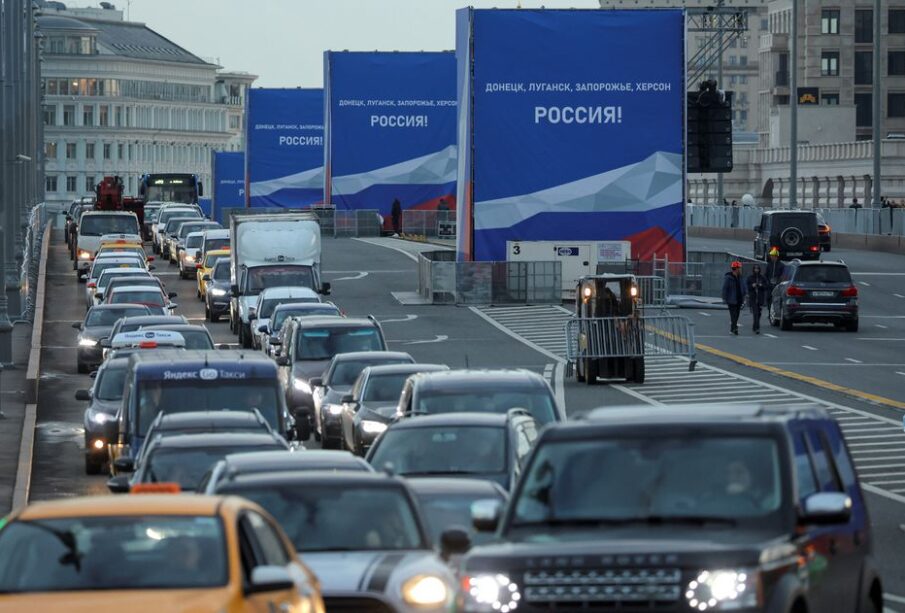 Vehicles are stuck in a traffic jam near banners, set up ahead of an expected ceremony and concert to declare four Ukraine's self-proclaimed regions part of Russia following recent referendums, on a bridge in central Moscow, Russia September 29, 2022. A slogan on the banners reads: "Donetsk, Luhansk, Zaporizhzhia, Kherson - Russia!" REUTERS/Evgenia Novozhenina

Russian President Vladimir Putin was set to host a ceremony on Friday for the annexation of four Ukrainian regions, while his Ukrainian counterpart said Putin would have to be stopped if Russia was to avoid the most damaging consequences of the war.

Russia’s expected annexation of the Russian-occupied areas of Donetsk, Luhansk, Kherson and Zaporizhzhia has been widely condemned in the West. U.N. chief Antonio Guterres said it was a “dangerous escalation” that would jeopardise prospects for peace.

“It can still be stopped. But to stop it we have to stop that person in Russia who wants war more than life. Your lives, citizens of Russia,” Ukrainian President Volodymyr Zelenskiy said in a Thursday evening address.

The four regions cover some 90,000 square km, or about 15% of Ukraine’s total area – about the size of Hungary or Portugal.

Russian government officials have said that the four regions will fall under Moscow’s nuclear umbrella once they have been formally incorporated into Russia. Putin has said he could use nuclear weapons to defend Russian territory if necessary.

Ukraine has said it will seek to take back its territory.

“Referendums have no legal value, under international law the regions are and remain territories of Ukraine and Ukraine is ready to do anything to take them back,” Mikhailo Podolyak, Zelenskiy’s adviser, told Italian La Repubblica.

“They were sham votes, in which few people participated. To those who went to vote they pointed their rifles in their faces ordering, ‘Vote!’.”

Zelenskiy promised a strong response to the annexations and summoned his defence and security chiefs for an emergency meeting on Friday where “fundamental decisions” will be taken, an official said.

On the eve of the annexation ceremony in the Georgievsky Hall of the Great Kremlin Palace and a concert in Red Square, Putin said that “all mistakes” made in a call-up announced last week should be corrected, his first public acknowledgment that it had not gone smoothly.

Thousands of men have fled from Russia to avoid a draft that was billed as enlisting those with military experience and required specialities but has often appeared oblivious to individuals’ service record, health, student status or even age.

Kremlin spokesman Dmitry Peskov did not say whether Putin would attend the concert, as he did a similar event in 2014 after Russia proclaimed it had annexed Ukraine’s Crimea region.

A stage has been set up in the Moscow square with giant video screens and billboards proclaiming the four areas part of Russia.

“The results were manufactured in Moscow,” Biden said at a conference of Pacific Island leaders on Thursday.

U.N. Secretary General Guterres told reporters: “Any decision to proceed with the annexation … would have no legal value and deserves to be condemned.”

The United States and the European Union are set to impose additional sanctions on Russia over the annexation, and even some of Russia’s close traditional allies, such as Serbia and Kazakhstan, say they will not recognise the take over.

What Russia is billing as a celebration comes after it has faced its worst setbacks of the seven-month-old war, with its forces routed in Ukraine’s northeast Kharkiv region.

Russian forces launched a rocket attack on a humanitarian convoy on the road out of Zaporizhzhia and there were dead and wounded, said Oleksandar Starukh, the governor of the region.

Starukh said people were queuing to bring aid to relatives in Russian-controlled territory and pick up their relatives when the attack occurred. He did not specify the location.

Reuters could not verify battlefield reports.

Some military experts say Kyiv is poised to deliver another major defeat, gradually encircling the town of Lyman, Russia’s main remaining bastion in the northern part of Donetsk province. Its capture would open the way into the Luhansk region.