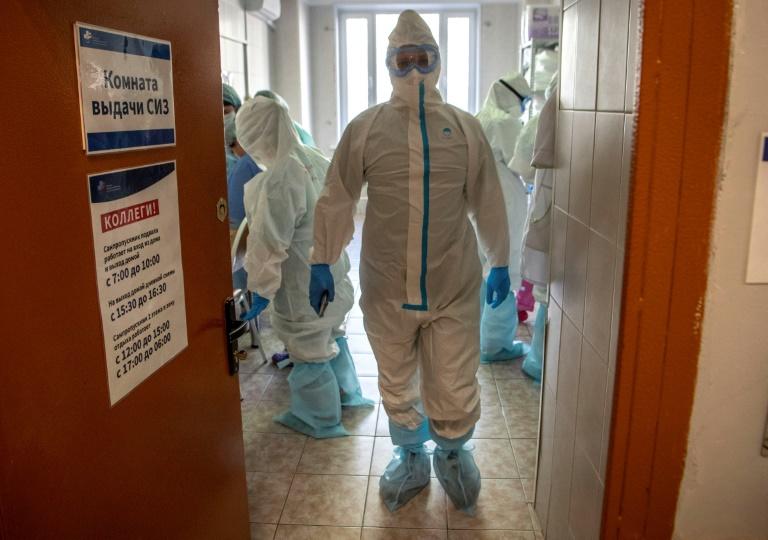 President Vladimir Putin on Thursday said the coronavirus crisis was easing in Russia as the number of new daily cases fell below 10,000 for the first time in nearly two weeks.

Health officials said they had registered 9,974 new infections in the last 24 hours, bringing Russia’s tally to 252,245, the second-highest in the world after the United States, with a total of 2,305 deaths.

But the number of new cases has been dropping and Thursday’s tally was the first below 10,000 since May 2.

“Over the past weeks, all our efforts have been aimed first and foremost at pushing back against the coronavirus epidemic,” Putin said in a televised video-conference with scientists and officials.

But, he added, “the situation is changing now, and this gives us an opportunity to once again focus on our current and long-term agenda”.

The Kremlin this week began easing a national lockdown to slow the spread of the virus, despite the steady rise in infections.

Putin’s meeting was focused on genetic research and plans for Russia to launch three top research centres in the field.

Rinat Maksyutov, the head of the Vektor State Virology and Biotechnology Centre, told Putin at the meeting that research was ongoing on several potential vaccines against the coronavirus.

The top secret lab complex in Siberia has developed six prototype vaccines and Maksyutov told Putin that “three promising ones” had been chosen for the next stage of pre-clinical studies.

He said he hoped to be able to register an experimental coronavirus vaccine in September.

“I am very much counting on your work being finished… and the registration of this vaccine against coronavirus being carried out in September,” Putin told Maksyutov.

Putin said the research centre needed to ensure its intellectual property rights on the vaccine.

It was unclear if he meant that a vaccine should be ready for use by September.

The Vektor laboratory conducted secret biological weapons research in the Soviet era and stockpiles viruses ranging from Ebola to smallpox.

Several senior Russian officials have tested positive for the coronavirus, including Putin’s spokesman, but Culture Minister Olga Lyubimova on Thursday said she had fully recovered.

Prime Minister Mikhail Mishustin and the construction minister were also infected and Putin said on Thursday that Education Minister Valery Falkov had tested positive but was no longer infected.

Russia says its high number of cases is due in part to a massive testing campaign that has seen six million tests carried out.

Moscow accounts for roughly half of all infections and the city said it would be launching mass voluntary tests for antibodies from Friday, with 70,000 invitations to be sent out every three days.

Mayor Sergei Sobyanin said mass random testing is important to gauge when to further ease containment measures, which were ordered in the Russian capital in late March and last to the end of this month.

Despite its high number of cases, Russia’s official coronavirus fatality rate is low in comparison to countries like the United States, Britain, Italy and Spain.

Authorities say this is because Russia was able to learn lessons from the experiences of western Europe, moving quickly to isolate travellers and people at risk, and launch a vast campaign to test and quarantine those infected.

But critics have cast doubt on the figures, accusing the authorities of under-counting by blaming virus-related deaths on other causes.