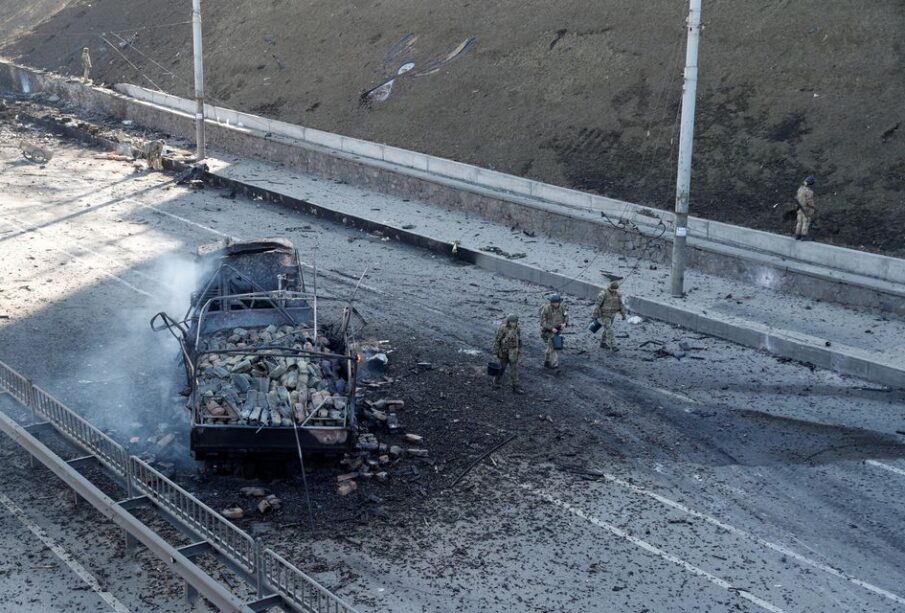 Ukrainian servicemen walk by a damaged vehicle, at the site of a fighting with Russian troops, after Russia launched a massive military operation against Ukraine, in Kyiv, Ukraine February 26, 2022. REUTERS/Valentyn Ogirenko

President Vladimir Putin ordered his military command to put Russia’s nuclear deterrent on high alert on Sunday in the face of a huge Western response to his war on Ukraine, which said it had repelled Russian ground forces nearing its biggest cities.

The United States responded by saying Putin was escalating the war in a “totally unacceptable” way, amid signs that the biggest assault on a European state since World War Two was not producing rapid battlefield victories for Russia.

The Ukrainian president’s office said negotiations with Moscow without preconditions would be held at the Belarusian-Ukrainian border. The Kremlin said talks had started.

As missiles rained down on Ukrainian cities, nearly 400,000 Ukrainian civilians, mainly women and children, have fled into neighbouring countries. Hundreds were stranded in Kyiv on Sunday waiting for trains to take them west, away from the fighting.

The capital remains in Ukrainian government hands, with President Volodymyr Zelenskiy rallying his people despite Russian shelling of civilian infrastructure.

Medical oxygen supplies were running low, the WHO said. A blood bank was packed with donors, despite coming under fire that injured two people a day earlier, a doctor said.

Putin, who has described the invasion as a “special military operation”, thrust an alarming new element into play when he ordered Russia’s deterrence forces – units that include nuclear weapons – onto high alert.

He cited aggressive statements by NATO leaders and the barrage of economic sanctions imposed on Russia by the West.

“As you can see, not only do Western countries take unfriendly measures against our country in the economic dimension – I mean the illegal sanctions that everyone knows about very well – but also the top officials of leading NATO countries allow themselves to make aggressive statements with regards to our country,” Putin said on state television.

Putin previously referred to his nuclear arsenal in a speech announcing the start of the invasion on Thursday, saying Russia’s response to any country that tried to hinder it would be immediate and carry “consequences that you have never encountered in your history”.

France’s Foreign Minister retorted the same day that Putin should remember that NATO too was a nuclear alliance.

‘NOT DETERRENCE BUT THREAT’

“This is not ‘deterrence’ on Putin’s part – this is a threat,” said Patricia Lewis, director of the Chatham House think tank’s international security programme.

Ukrainian Foreign Minister Dmytro Kuleba said Putin’s order was an attempt to pressure Kyiv during the talks but that it would not be cowed.

U.S. Ambassador to the United Nations Linda Thomas-Greenfield told CBS: “President Putin is continuing to escalate this war in a manner that is totally unacceptable and we have to continue to stem his actions in the strongest possible way.”

A U.S. defence official said Washington was trying to assess what Putin’s announcement meant in tangible terms, but that it increased the danger from any miscalculation. The United States and several other Western countries are providing military assistance for Ukraine.

And in the strongest economic sanctions yet on Moscow, the United States and Europe said on Saturday they would banish big Russian banks from the main global payments system SWIFT and announced other measures aimed at limiting Moscow’s use of a $630 billion war chest.

Rolling protests have been held around the world against the invasion in recent days, including in Russia, which has clamped down hard, detaining an additional 1,700 protesters on Sunday, bringing total arrests there to 4,000.

More than 100,000 people protested in solidarity with Ukraine in Berlin on Sunday.

Ukraine’s president says Kyiv has agreed to send a delegation for talks “without preconditions” with Russian officials on the Ukraine-Belarus border.

He did not give a precise time for the meeting, but said Lukashenko, a Putin ally, “has taken responsibility for ensuring that all planes, helicopters and missiles stationed on Belarusian territory remain on the ground during the Ukrainian delegation’s travel, talks and return.”

A Ukrainian state agency said that, before daybreak, Russian troops blew up a natural gas pipeline in Kharkiv, Ukraine’s second largest city, sending a burning cloud up into the darkness.

Soon after, Russian soldiers and armoured vehicles rolled into Kharkiv, located in Ukraine’s northwest, and witnesses reported firing and explosions. But city authorities said Ukrainian fighters had repelled the attack.

“Control over Kharkiv is completely ours! The armed forces, the police, and the defence forces are working, and the city is being completely cleansed of the enemy,” regional Governor Oleh Sinegubov said.

Reuters was unable to corroborate the information.

“We have withstood and are successfully repelling enemy attacks. The fighting goes on,” Zelenskiy said in the latest of several video messages from the streets of Kyiv.

He has declined to leave the city and has been marshalling combatants and civilians, with many non-combatants seeking shelter in underground railway stations.

At least 198 Ukrainians, including three children, have been killed in the invasion, the head of Ukraine’s Health Ministry said.

A United Nations agency reported 64 civilian deaths and a Ukrainian presidential adviser said 3,500 Russian soldiers had been killed or wounded. Reuters was not able to verify the numbers. Western officials have said intelligence shows Russia suffering higher casualties than expected, but Russia has not released casualty figures.

Putin has said he must eliminate what he calls a serious threat to his country from its smaller neighbour, accusing it of genocide against Russian-speakers in eastern Ukraine – something Kyiv and its Western allies reject as a lie.

Ukraine, a democratic nation of 44 million people, won independence from Moscow in 1991 at the fall of the Soviet Union and has pushed to join the NATO Western military alliance and the EU, goals Russia vehemently opposes.

Germany said on Sunday said it would increase spending on defence to more than 2% of its economic output in response to the invasion, breaking its post-World War Two custom.

“There could be no other answer to Putin’s aggression,” Chancellor Olaf Scholz told lawmakers, a day after Germany agreed to send defensive anti-tank weapons, surface-to-air missiles and ammunition to Ukraine.