Putin expected to proclaim annexation of Ukraine territory within days 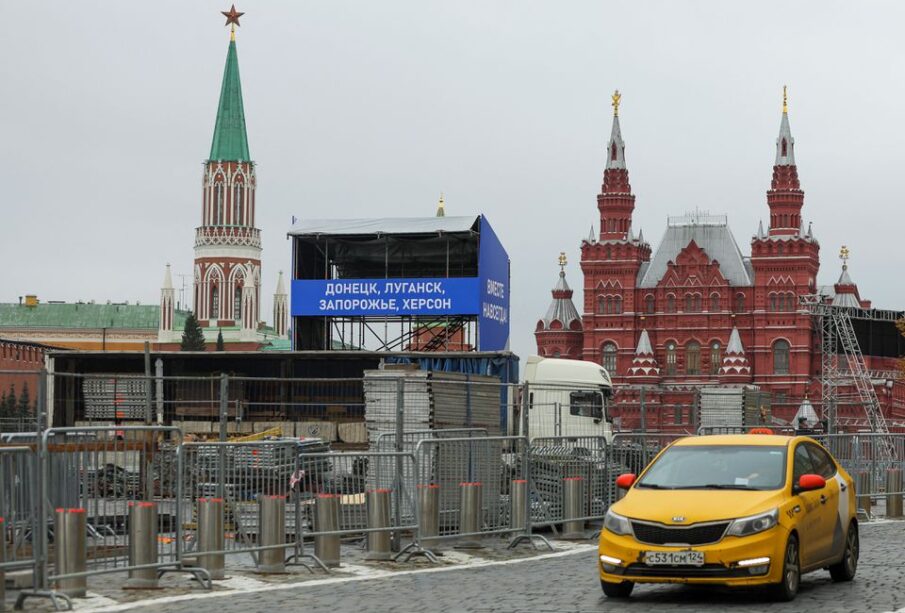 A view shows banners and constructions ahead of an expected event, dedicated to the results of referendums on the joining of four Ukrainian self-proclaimed regions to Russia, near the Kremlin Wall and the State Historical Museum in Red Square in central Moscow, Russia September 28, 2022. Banners read: "Donetsk, Luhansk, Zaporizhzhia, Kherson. Together forever!" REUTERS/Evgenia Novozhenina

Moscow was poised on Wednesday to annex a swath of Ukraine, releasing what it called vote tallies showing support in four partially occupied provinces to join Russia, after what Kyiv and the West denounced as illegal sham referendums held at gunpoint.

On Moscow’s Red Square, a tribune with giant video screens has been set up, with billboards proclaiming “Donetsk, Luhansk, Zaporizhzhia, Kherson – Russia!”

President Vladimir Putin could proclaim the annexation in a speech within days, just over a week since he endorsed the referendums, ordered a military mobilisation at home and threatened to defend Russia with nuclear weapons if necessary.

The Russian-installed administrations of the four Ukrainian provinces on Wednesday formally asked Putin to incorporate them into Russia, which Russian officials have suggested is a formality.

“The results are clear. Welcome home, to Russia!,” Dmitry Medvedev, a former president who serves as deputy chairman of Russia’s Security Council, said on Telegram, after the release of the results.

Russian-backed authorities claim to have carried out the referendums over five days on territory that makes up around 15% of Ukraine.

Residents who escaped to Ukrainian-held territory in recent days have told of people being forced to tick ballots in the street by roving officials at gunpoint. Footage filmed during the exercise showed Russian-installed officials taking ballot boxes from house to house with armed men in tow.

Russia says voting was voluntary and in line with international law, and turnout high.

Ukrainian President Volodymyr Zelenskiy sought to rally international support for his country against possible Russian annexations in a series of calls with foreign leaders, including those of Britain, Canada, Germany and Turkey.

He told Canadian Prime Minister Justin Trudeau that the world must not bow to Russian “nuclear blackmail”, adding: “The aggressor must clearly understand all the consequences of his irresponsibility”.

The United States said it was working with allies and partners to quickly impose severe economic costs on Moscow over the referendums.

The European Union’s executive also proposed fresh sanctions against Russia, but the bloc’s 27 member countries will need to overcome their own differences to implement them.

Denis Pushilin, the Russian-installed leader in Donetsk, said he was on his way to Moscow to complete the legal process of joining Russia.

“Now we are moving to a new stage of military action,” he said, amid speculation that Putin is set to change the status of what he has so far called a “special military operation” to a counter-terrorism operation.

Kremlin spokesman Dmitry Peskov said Russia would need to keep fighting until it had taken control of all of Donetsk. Around 40% of the province is still under Ukrainian control and scene of some of the war’s heaviest fighting.

The Russian annexation plan gathered pace as leaking gas bubbled up in the Baltic Sea for a second day after suspected explosions tore through undersea Russian pipelines on Tuesday. The Nord Stream 1 pipeline, once the main route for Russian gas to Germany, was already shut but cannot now be easily reopened.

NATO and the European Union warned of the need to protect critical infrastructure from what they called “sabotage”, though officials stopped short of saying who they blamed. Russia’s FSB security service is investigating the damage sustained to the pipelines as “international terrorism”, the Interfax news agency cited the general prosecutor’s office as saying.

The annexation is part of a huge escalation strategy announced by Putin last week, along with the swift call-up of hundreds of thousands of Russian men to fight, and a new warning on nuclear weapons, which he said was “not a bluff”.

His action followed a stunning setback at the front, when Russian forces hastily abandoned territory the size of Cyprus in a matter of days.

Russian officials have said any attack on annexed territory would be an attack on Russia itself.

The annexations have been rejected globally, with even traditional allies of Moscow such as Serbia and Kazakhstan saying they will not recognise it.

In the Ukrainian-held city of Zaporizhzhia, Ukrainians who managed to flee Russian-occupied territory through the last frontline checkpoint said they had seen no real voting.

“They can announce anything they want. Nobody voted in the referendum except a few people who switched sides. They went from house to house but nobody came out,” said Lyubomir Boyko, 43, from Golo Pristan, a village in Russian-occupied Kherson province.

Residents said many were fleeing for fear Moscow will start press-ganging men to fight in its forces once it declares the territory to be Russian. For now, Russian officials at the checkpoint were letting some people leave.

“The line of vehicles was so long you could not see the end of it,” said Andriy, 37, an agricultural worker from Beryslav in Kherson province who declined to give his last name, describing the checkpoint.

Entire villages had emptied, he said, standing by the mud-spattered minibus in which he arrived with his wife, two children and parents.

“Seventy percent of people are leaving because of the referendum. There was no light, no gas, and no work, and all of a sudden you get the referendum. It’s complete nonsense.”