Putin claims victory in Mariupol despite leaving defenders holed up 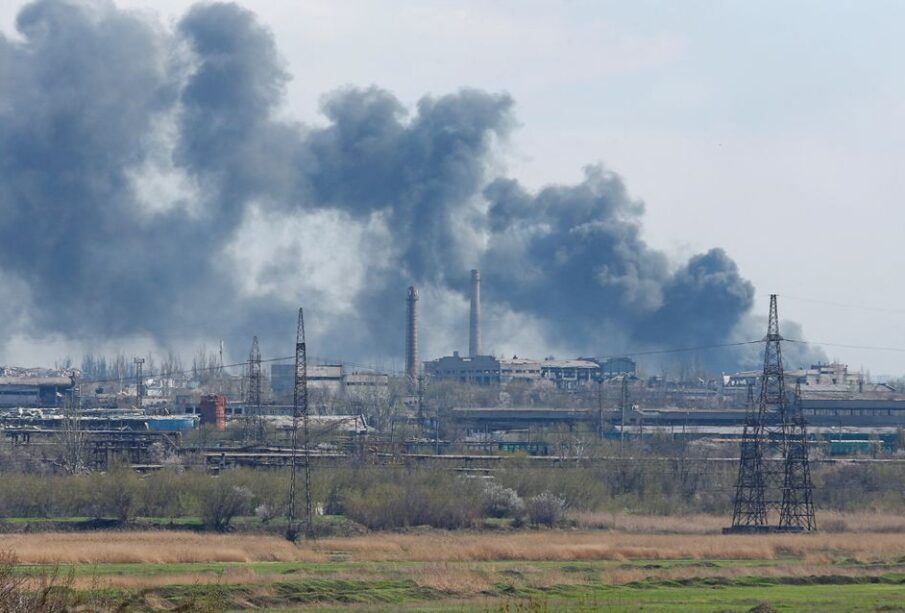 Smoke rises above a plant of Azovstal Iron and Steel Works company during Ukraine-Russia conflict in the southern port city of Mariupol, Ukraine April 20, 2022. REUTERS/Alexander Ermochenko

President Vladimir Putin claimed victory in the biggest battle of the Ukraine war on Thursday, declaring the port of Mariupol “liberated” after nearly two months of siege, despite leaving hundreds of defenders still holed up inside a giant steel works.

Ukraine said Putin’s attempt to avoid a final clash with its forces in the city was an acknowledgment that he lacked the forces to defeat them.

“You successfully completed the combat effort to liberate Mariupol. Let me congratulate you on this occasion, and please convey my congratulations to the troops,” Putin told Defence Minister Sergei Shoigu in a televised meeting at the Kremlin.

“I consider the proposed storming of the industrial zone unnecessary. I order you to cancel it,” he said. “There’s no need to climb into these catacombs and crawl underground through these industrial facilities … Block off this industrial area so that not even a fly can get through.”

The decision not to storm the Azovstal steel plant – after days of ordering its defenders to surrender or die – allowed Putin to claim his first big prize since his forces were driven out of northern Ukraine last month. But it falls short of the unambiguous victory Moscow has sought after months of brutal combat in a city reduced to rubble.

“They physically cannot take Azovstal, they have understood this, they have taken huge losses there,” Ukrainian presidential adviser Oleksiy Arestovych told a briefing. “Our defenders continue to hold it.”

Mariupol, once home to 400,000 people, has seen not only the most intense battle of the war but also its worst humanitarian catastrophe, with hundreds of thousands of civilians cut off for nearly two months under Russian siege and bombardment.

Journalists who reached it during the siege found streets littered with corpses, nearly all buildings destroyed, and residents huddled freezing in cellars, venturing out to cook scraps on makeshift stoves or to bury bodies in gardens.

Two incidents in particular became symbolic of what Kyiv and the West call Russian war crimes – the bombing of a maternity hospital and, a week later, of a theatre with hundreds of civilians in the basement. Moscow denies targeting civilians, and, without evidence, says those incidents were faked.

Ukraine estimates that tens of thousands of civilians have died in Mariupol. It says some have been buried in mass graves, others removed from the streets by Russian forces using mobile cremation trucks to incinerate bodies. The United Nations and Red Cross say the civilian toll is still unknowable, but at least in the thousands.

Shoigu told Putin that Russia had killed more than 4,000 Ukrainian troops in its campaign to take Mariupol, and that 1,478 had given themselves up. Those figures could not be verified. Two of those who surrendered are British.

Putin said they must lay down their weapons and surrender, and that Russia would treat them with respect.

Ukrainian deputy prime minister Iryna Vereshchuk said 1,000 civilians and 500 wounded soldiers needed to be brought out from the plant immediately, blaming Russian forces for the failure to establish a safe corridor that she said had been agreed.

Moscow says Russia has taken in 140,000 civilians from the port city in humanitarian evacuations. Kyiv says some were deported by force, in what would be a war crime. On Wednesday, Russia allowed some buses to leave parts of Mariupol it controls, taking around 100 people to other parts of Ukraine.

After failing to capture Kyiv last month and being forced to withdraw from northern Ukraine, Russia has regrouped to launch a major new offensive this week in the two eastern provinces known as the Donbas.

Arestovych, the Ukrainian presidential adviser, said Moscow was declining to storm the Azovstal plant in part to redeploy some of its troops north to that offensive.

Ukraine said Russian forces had failed so far to completely capture Rubizhne, a Donbas town that has been a focus of their advance. The city of Kharkiv, near the Russian supply lines into Donbas, came under heavy bombardment, its mayor said.

With both sides hoping for success on the battlefield in Donbas, peace talks have been shelved. Kremlin spokesperson Dmitry Peskov said Moscow was still waiting for a response from Kyiv to a proposal it had handed over; Ukrainian President Volodymyr Zelenskiy said on Wednesday he had not seen or heard about any such document.

British military intelligence said Russian forces were keen to demonstrate significant success by May 9, the anniversary of the allied victory in Europe in World War Two when Russia’s military traditionally holds a spectacular parade on Red Square.

Russia calls its incursion a “special military operation” to demilitarise and “denazify” Ukraine. Kyiv and its Western allies reject that as a false pretext for an illegal war of aggression.

U.S. President Joe Biden will deliver an update on Ukraine at 9:45 a.m. (1345 GMT) on Thursday as he works to complete a new arms package, which is likely to be a similar size to an $800 million one announced last week, a U.S. official said.