Protests in Ecuador against job, wage cuts, over virus

The Times of Earth, International Edition
0
577 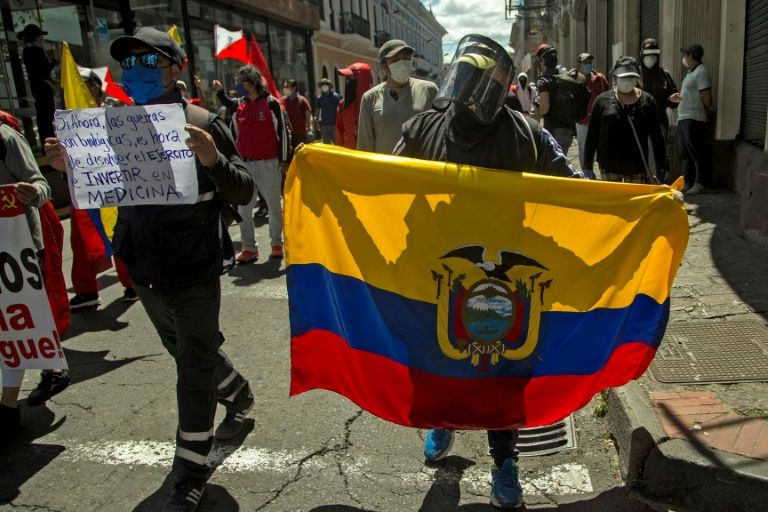 Demonstrators defied coronavirus restrictions to march in cities across Ecuador on Monday in protest against President Lenin Moreno’s drastic economic measures to tackle the crisis.

Moreno last week announced public spending cuts including the closure of state companies and embassies around the world, but trade unions Monday said workers were paying a disproportionate price compared to Ecuador’s elite.

“This protest is because the government is firing workers to avoid making the rich pay,” Mecias Tatamuez, head of the county’s largest union, the Unitary Front of Workers (FUT), told reporters at a march in Quito.

Around 2,000 people marched in the capital, waving flags and banners and shouting anti-government slogans.

The protesters wore masks and respected distancing measures recommended against the spread of the coronavirus that has caused at least 3,200 deaths in the country, making it South America’s worst hit nation per capita. Authorities say more than 2,000 further deaths are likely linked to the virus.

Demonstrations took place in several other cities, including Guayaquil, the epicenter of Ecuador’s health crisis, where union leaders said hundreds marched through the city.

Moreno ordered the closure of Ecuadoran embassies, a reduction in diplomatic staff and scrapped seven state companies as part of measures designed to save some $4 billion.

He also announced the liquidation of the TAME airline, which has lost more than $400 million over the last five years.

The government says the pandemic has so far cost the economy at least $8 billion.

Public sector working hours have been cut by 25 percent, with an accompanying 16 percent pay cut.

Moreno said on Sunday that 150,000 people had lost their jobs because of the coronavirus.

Ecuador was struggling economically before the pandemic hit, due to high debt and its dependence on oil.

The IMF predicts that the economy will shrink by 6.3 percent this year, the sharpest drop of any country in South America.