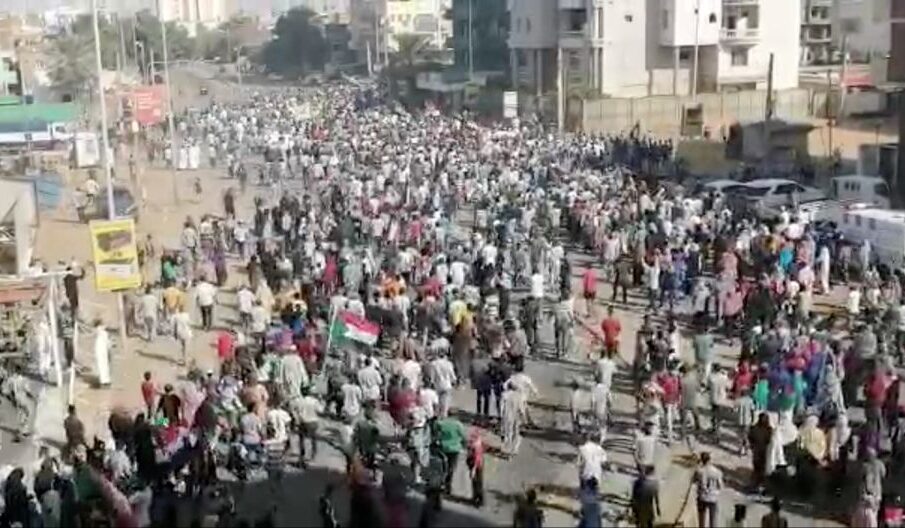 Demonstrators march in Khartoum, Sudan November 13, 2021, in this screen grab obtained from a video. RASD SUDAN NETWORK via REUTERS

Five protesters were killed on Saturday as huge crowds took to the streets in the Sudanese capital Khartoum and other cities to demonstrate against a military takeover, defying efforts by security forces to disperse them with tear gas and gunfire, witnesses and medics said.

The protests come two days after military leader Abdel Fattah al-Burhan announced the formation of a new ruling council that excludes the civilian coalition the military had been sharing power with since 2019.

Sudanese pro-democracy groups condemned the move and vowed to continue their campaign of civil disobedience and protests against the Oct. 25 coup.

As protesters began to gather in the early afternoon around the capital, security forces moved quickly to try to disperse them, firing tear gas and chasing demonstrators down side streets to prevent them reaching central meeting points, witnesses said.

“People were surprised that they fired the tear gas so early,” said one protester in Omdurman across the Nile from central Khartoum, adding that demonstrators retreated, barricaded streets, and then reassembled.

Witnesses estimated the number of protesters around Khartoum to be in the tens of thousands, with large crowds in other cities bringing the total nationwide to hundreds of thousands.

“The revolutionaries have nothing but peacefulness and are calling for democracy and bringing back civilian rule which was taken away by Burhan,” said Mohamed Hamed, a protester in Khartoum.

During previous rallies, including on Oct. 30 when hundreds of thousands also turned out, security forces had waited until later in the day before trying to disperse protesters.

The Central Committee of Sudanese Doctors, which is aligned with the protest movement, said demonstrations were “facing excessive repression using all forms of force including live bullets in several areas of the capital Khartoum”.

In Khartoum and its twin cities of Omdurman and Khartoum North four people were killed by live fire from security forces and one after suffocating from tear gas, the committee said. It said access to hospitals was difficult and that security forces had stormed Al Arbaeen hospital in Omdurman, beating medical staff and arresting injured protesters.

Sudanese police said in a statement they did not use firearms during the protests, which they said began peacefully but went off track. Some 39 policemen were injured and stations were attacked, they said.

There was no immediate comment from the military, but Burhan has previously said peaceful protests are allowed and the military does not kill protesters.

In Wad Madani, south-east of Khartoum, large crowds gathered, chanting slogans including: “Down, down with military rule,” a witness told Reuters. Protesters in other cities, including Al Gadarif and Kosti, were also met with tear gas, witnesses said.

The military takeover upended a transition towards democracy that began after the uprising that toppled autocrat Omar al-Bashir in April 2019. Security forces detained senior officials appointed under a power-sharing arrangement between the military and civilian groups and Prime Minister Abdalla Hamdok was placed under house arrest.

On Saturday, protesters carried pictures of Hamdok, now a symbol of resistance to military rule, while chanting against Burhan and his deputy Mohamed Hamdan Dagalo, commander of the paramilitary Rapid Support Forces.

Mobile internet services have remained cut in Sudan since the coup, despite a court order to restore them, and phone coverage has been disrupted, complicating efforts by the protest movement.

Despite widespread opposition from political groups in Sudan and pressure from Western powers that backed the transition, Burhan has pushed to consolidate the military’s position. read more Burhan has denied staging a coup, saying the army moved to correct the transitionand accusing civilian groups of inciting unrest.

Malik Agar, one of three rebel leaders named in the Sovereign Council, whose position on the military takeover had been unclear, told Sky News Arabia on Saturday that he considered it a coup and that it faced “many challenges”.

Western states and the World Bank have suspended economic assistance designed to help pull Sudan out of decades of isolation and a deep economic crisis.

The United States and other Western powers expressed grave concern at Burhan’s appointment of the ruling Sovereign Council and warned against unilateral action.

Reacting to Saturday’s rallies, the U.S. mission in Khartoum said: “The U.S. Embassy deeply regrets the loss of life and injuries of dozens of Sudanese citizens demonstrating today for freedom and democracy, and condemns the excessive use of force.”