The Times of Earth, International Edition
0
643 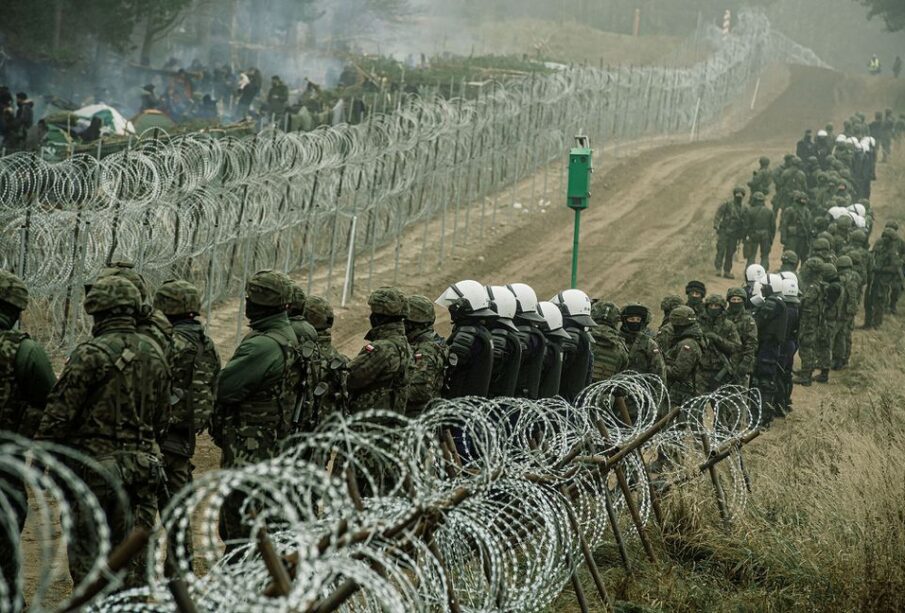 Polish soldiers and police watch migrants at the Poland/Belarus border near Kuznica, Poland, in this photograph released by the Territorial Defence Forces, November 12, 2021. Irek Dorozanski/DWOT/Handout via REUTERS

NATO must take “concrete steps” to resolve the migrant crisis on the Belarus border, the Polish prime minister was quoted as saying on Sunday, adding that Poland, Lithuania and Latvia may ask for consultations under the alliance’s treaty.

Thousands of migrants have travelled to Belarus in the hope of crossing into the European Union (EU), only to find themselves trapped on the border in freezing conditions.

The EU accuses Minsk of orchestrating the crisis to put pressure on the bloc over sanctions, but Belarus has repeatedly denied this. Some countries in the region have warned the stand-off could escalate into a military conflict.

“It is not enough just for us to publicly express our concern – now we need concrete steps and the commitment of the entire alliance,” Mateusz Morawiecki told Polish state-run news agency PAP.

Under Article 4 of the NATO treaty, any ally can request consultations whenever, in the opinion of any of them, their territorial integrity, political independence or security is threatened.

EU foreign policy chief Josep Borrell was quoted as saying that the bloc will widen sanctions on Belarus on Monday to include airlines and travel agencies thought to be involved in transporting migrants.

Morawiecki said that the EU should jointly finance a border wall.

“Secretary Blinken reaffirmed U.S. support for Poland in the face of the Lukashenka regime’s cynical exploitation of vulnerable migrants,” Price said in a statement on Sunday.

Meanwhile, Polish forces described an increasingly tense situation on the frontier, with the Border Guard saying migrants were receiving instructions and equipment from Belarusian guards and it expected another “big attempt” to break through.

Belarusian blogging service NEXTA shared a video of what it said was a large column of migrants walking towards the frontier.

Footage posted on Twitter by the Polish Interior Ministry showed what appeared to be a water cannon deployed at the border, as a recorded message warned migrants that force could be used against them if they did not follow orders.

NGO Grupa Granica said in a statement it had received information about attempts by Belarus to force migrants to use violence against Polish officers.

“Due to the risk of escalation of violence we want to remind all parties that migrants are not aggressors but hostages of Lukashenko’s regime,” it wrote.

The Belarusian State Border Guard Committee spokesperson Anton Bychkovsky said the accusations were disinformation. “It does not correspond with the reality,” he said

On Saturday, a group of about 50 migrants broke through defences on the border and entered Poland near the village of Starzyna, police said on Sunday. The Border Guard told PAP they were all caught.