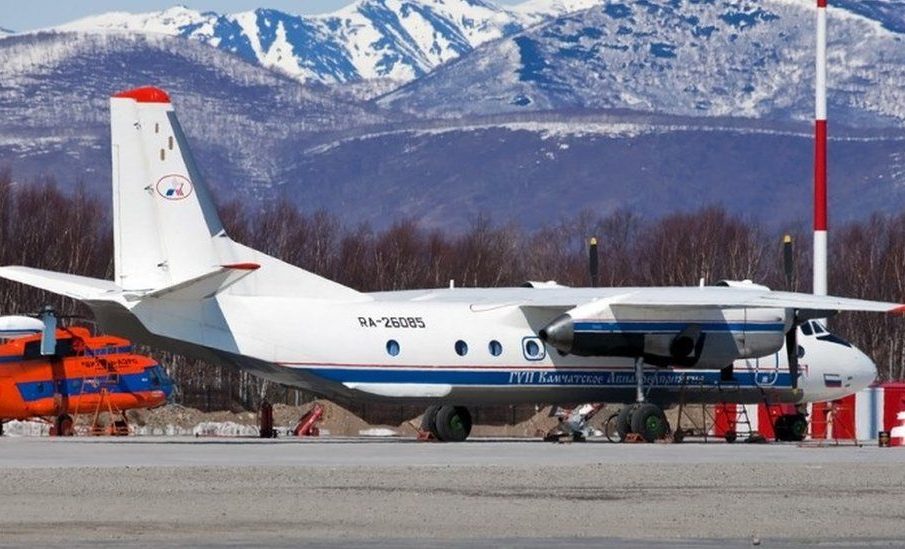 An An-26 plane seen at Petropavlovsk airport. RUSSIAN EMERGENCIES MINISTRY/REUTERS

An aeroplane with 28 people on board crashed into the sea on Tuesday off Russia’s far eastern Kamchatka peninsula as it was preparing to land, RIA news agency reported on Tuesday.

The plane, an Antonov An-26 twin-engined turboprop, was en route from regional capital Petropavlovsk-Kamchatsky to Palana, a village in northern Kamchatka, when it lost contact with air traffic control, Russia’s emergencies ministry said.

There were 22 passengers and six crew on board, the ministry said. Village mayor Olga Mokhireva was among the passengers, the TASS agency quoted local authorities as saying.

The weather in the area was cloudy at the time, Interfax news agency said, quoting the local meteorology centre.

According to TASS, the plane was built in 1982.

An-26 planes, which were manufactured from 1969 until 1986 during the Soviet era and are still used throughout the former USSR for civilian and military transport, have been involved in a number of accidents in recent years.

Four people died in March when an An-26 plane used by ex-Soviet Kazakhstan’s military crashed while landing at an airport in the country’s largest city of Almaty.

In September 2020, 26 people died in ex-Soviet Ukraine when a military An-26 plane crashed in the northeastern city of Kharkiv during a training flight.

An-26s have also been involved in Russian military accidents in recent years.

In March 2018, 39 people died when an An-26 transport plane crashed while landing at an airport in Syria.

A year earlier one soldier was killed when an An-26 crashed during a training flight near the central Russian city of Saratov.

Flying in Russia can also be dangerous in the vast country’s isolated regions with difficult weather conditions such as the Arctic and the Far East.

The last major passenger plane accident took place in May 2019, when a Sukhoi Superjet belonging to the flag carrier airline Aeroflot crash-landed and caught fire on the runway of a Moscow airport, killing 41 people.

In August 2019, a Ural Airlines flight carrying more than 230 people made a miracle landing in a Moscow corn field after a flock of birds was sucked into the engines shortly after take-off.

Germany relaxes restrictions for travelers from UK, India and other countries