The Times of Earth, International Edition
0
539 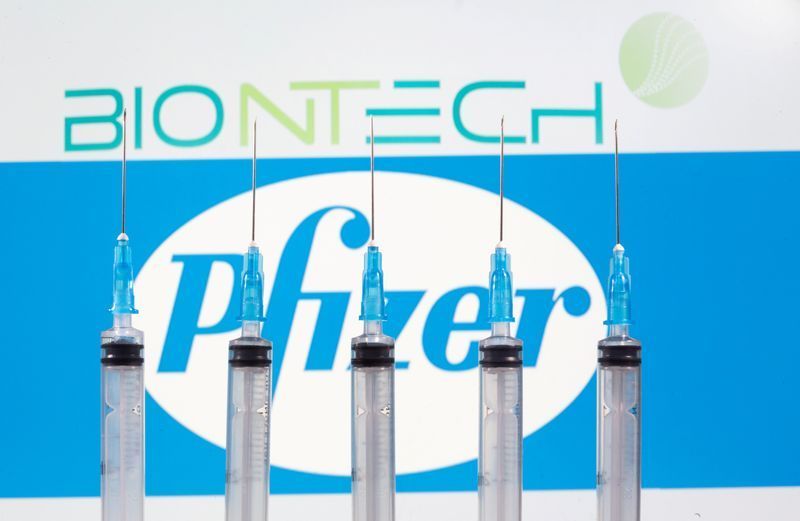 Syringes are seen in front of displayed Biontech and Pfizer logos in this illustration taken November 10, 2020. REUTERS/Dado Ruvic

The US Food and Drug Administration (FDA) issued a positively-worded briefing document Tuesday that said the Pfizer-BioNTech Covid-19 vaccine is safe and effective, raising expectations the regulator is poised to grant emergency approval.

An independent committee advising the FDA will meet Thursday on the matter, after Britain became the first country to green light the vaccine last week.

Two months of follow-up data among 38,000 US trial participants after they received their second of two injections “suggest a favorable safety profile, with no specific safety concerns identified that would preclude issuance of an EUA (emergency use authorization),” the FDA document said.

It added that the vaccine’s efficacy in preventing Covid-19 was 95 percent, and it worked uniformly across age groups, genders, and racial groups, as well as among people with underlying conditions.

In addition, there is some evidence that the vaccine offers protection after the first injection, that it prevents even the worst cases of Covid-19, and protects people who have been previously infected.

But the committee said more research was needed to confirm these potential findings.

“By far and away the big takeaway is it appears as good if not better than advertised,” Andrew Morris, an infectious disease specialist at the University of Toronto told AFP.

He added he was particularly excited by data suggesting the first injection might be enough to protect people.

The companies have previously released some of their data in press statements but the FDA has access to a much more detail.

Reactions graded as “severe” were more common after the second dose and less frequent in participants aged 55 and older.

There were some adverse events classed as “serious” — the highest grade — but there was no meaningful imbalance in the frequency these occurred in the vaccine and placebo arms.

There were four cases of Bell’s palsy — a generally non-serious form of facial droop that most people recover from — in the vaccine group and none in the placebo group.

Morris, who has done previous research on this condition, said he was somewhat concerned by this finding, and according to his calculations it occurred at a greater frequency than would be expected in the general population.

“I don’t in any way want anyone to think that this is a reason not to take the vaccine,” he said, but it was important to be upfront about potential complications, even if they are very rare and the benefits strongly outweigh the risks.

There were also some reports of people who got swollen lymph nodes, which Morris said was not immediately concerning but should be watched.

The advisory group will also consider what additional studies the manufacturers will need to undertake after issuance of an EUA.

Pfizer has said it wants to transfer everyone in the placebo arm of the study over to the vaccine, but the FDA committee said this had to be balanced against the need to gather more controlled data.