The Times of Earth, International Edition
0
1447 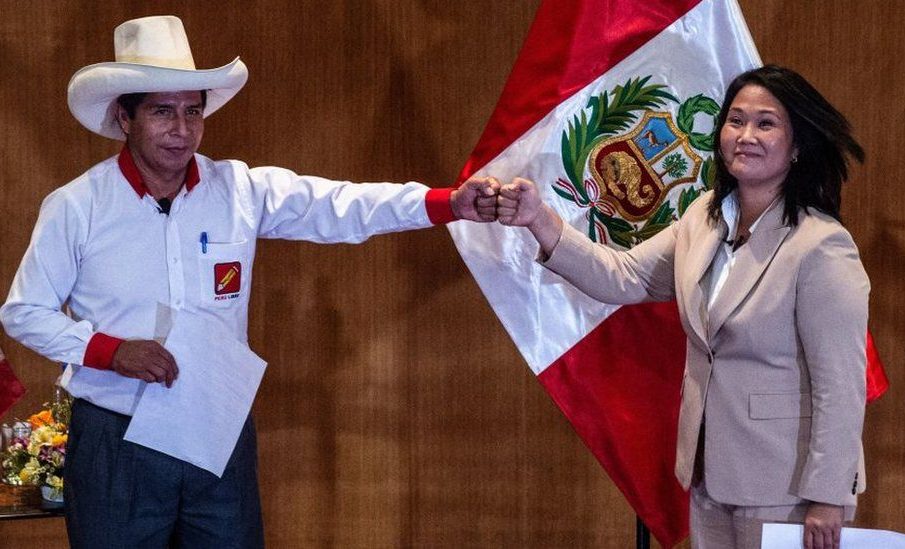 Peruvian socialist Pedro Castillo edged ahead of right-wing rival Keiko Fujimori in the country’s presidential election vote count on Monday, taking a razor-thin but growing lead in the official tally on the back of a late surge of rural votes.

The official count from Sunday’s election showed outsider candidate Castillo with 50.2% and Fujimori on 49.8%, with over 95% of the vote counted. The leftist candidate had trailed overnight, but started to take the lion’s share of ballots as the count progressed to steadily haul himself clear.

Castillo, the son of peasant farmers, has pledged to shake up the Andean nation’s constitution and mining laws, spooking copper producers and local markets, which fell sharply in trading on Monday as he gained in the race.

The tightness of the result could lead to days of uncertainty and tension. The vote underscored a sharp divide between the capital city Lima and the nation’s rural hinterland that has propelled Castillo’s unexpected rise.

“All we want right now is democracy, that everything be democratic. That whoever wins, the other accepts it and doesn’t start any trouble,” said Lili Rocha, a voter in Lima after some scuffles had broken out overnight.

Lucia Dammert, a Peruvian academic based in Chile, predicted that the coming days would be volatile, with potential challenges to the votes, requests for recounts and potential for street protests by supporters of the losing side.

As results trickled in on Sunday evening, 51-year-old Castillo had rallied supporters to “defend the vote” when an exit poll had shown him behind, though he later called for calm.

Fujimori, 46, the daughter of ex-president Alberto Fujimori, who is in prison for human rights abuses and corruption, also appealed for “prudence, calm and peace from both groups.”

Castillo’s Free Peru party said on Twitter that the candidate, who had been in his northern rural home district to vote, had traveled to Lima to “safeguard the will of the people”, though a planned press conference was later called off.

J.P. Morgan said in a note that it could be days before the final outcome of the election was clear, and the two candidates might opt to wait for this process to finish before declaring victory or conceding defeat.

An unofficial fast count late on Sunday by Ipsos Peru had given Castillo a fractional lead, after an exit poll had said rival Fujimori would eke out a win, leaving the copper-rich country, investors and mining firms guessing.

“Unless the too-close-to-call scenario depicted by the quick count proves wrong, we seem poised for a number of days of heightened uncertainty ahead,” J.P. Morgan said.

Castillo’s sudden rise to prominence since winning the first-round vote in April has unnerved markets and spooked mining firms concerned over plans to sharply hike taxes on mineral profits and threats of nationalizations.

Analysts say, however, that whoever wins will have a weakened mandate given the sharp divisions in Peru, and will face a fragmented Congress with no one party holding a majority, potentially stalling any major reforms.

The two candidates pledged vastly different remedies for a country that went through three presidents in a week last year and has suffered a sharp economic slump brought on by the world’s deadliest per capita COVID-19 outbreak.

Fujimori has pledged to follow the free-market model and maintain economic stability in Peru, the world’s second largest copper producer, with a “a mother’s firm hand”.

Castillo, who has become a champion for the poor, has promised to redraft the constitution to strengthen the role of the state and take a larger portion of profits from mining firms.

Street vendor Natalia Flores said she had not voted for either candidate but was hopeful that whoever won would lead the country beyond the recent political turmoil and the pandemic.

“Whoever comes out ahead, I think they’ll have to do a good job because in Peru the issue of the pandemic is terrible for us economically. Work is unstable,” she said.

“Whether it’s Mr. Castillo, or Ms. Keiko (Fujimori), I hope they do a good job over the next five years.”