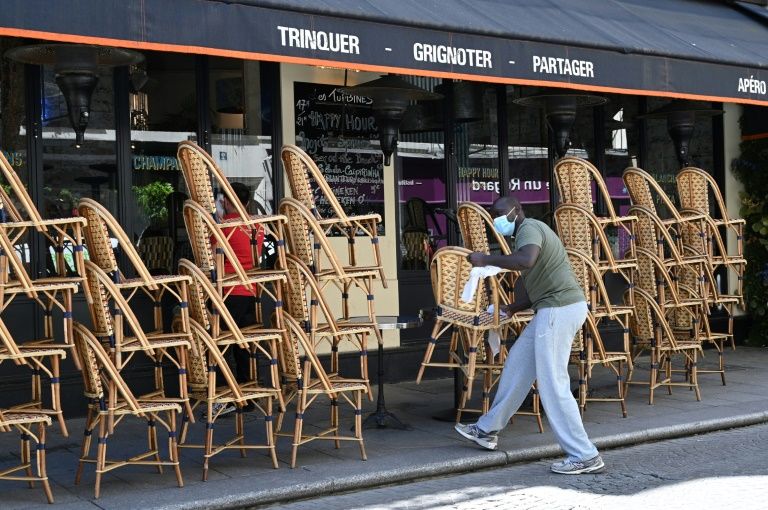 A barman in Paris setting up outside seating ahead of the partial reopening of restaurants and bars in the French capital on June 2. (AFP Photo/BERTRAND GUAY)

Restaurants, cafes and bars in Paris will be able to put more tables outside when they reopen Tuesday after two months of lockdown, allowing them to serve more clients even as their inside dining rooms must remain closed.

“In this crisis, Paris needs to support its restaurants and bars. They are the heart of our city,” Mayor Anne Hidalgo told Sunday’s Parisien newspaper.

While other restaurants across France can fully reopen Tuesday, the high number of COVID-19 cases and higher contagion risks in the densely populated Paris region prompted authorities to allow only limited operations for now.

But Paris restaurants and cafes will be allowed to spread out along sidewalks and even set up tables in parking spaces in front of their buildings.

They can even expand their terraces in front of neighbouring businesses if the owners do not object, said Jean-Louis Missika, the city’s deputy major in charge of urbanism.

Terrace taxes have also been suspended in the capital and other French cities to help owners recover from the coronavirus shutdowns.

“This is going to let these businesses get back up and running,” said Didier Chenet, president of the GNI Synhorcat of restaurant owners.

He said that Paris counts some 12,500 establishments with terraces, though only 1,500 are covered.

Some Paris restaurants jumped the gun over the Pentecost holiday weekend, with police largely turning a blind eye to impromptu patios set up across the city on Saturday.

Hidalgo told the Parisien that streets would be closed off entirely in some neighbourhoods, such as the picturesque Rue Lepic in Montmartre or the Place des Vosges in the Marais, a nightlife hotspot.

The restaurant reopenings are part of the second phase of France’s “deconfinement” plan, which will also lift a 100-kilometre (60-mile) limit on travel.

More schools will begin welcoming students back this week and museums and monuments can open, though face masks must be worn and many will require visitors to follow strict itineraries.

But gatherings of more than 10 people in public places will remain prohibited until June 21, and the wearing of a mask on public transport is obligatory.