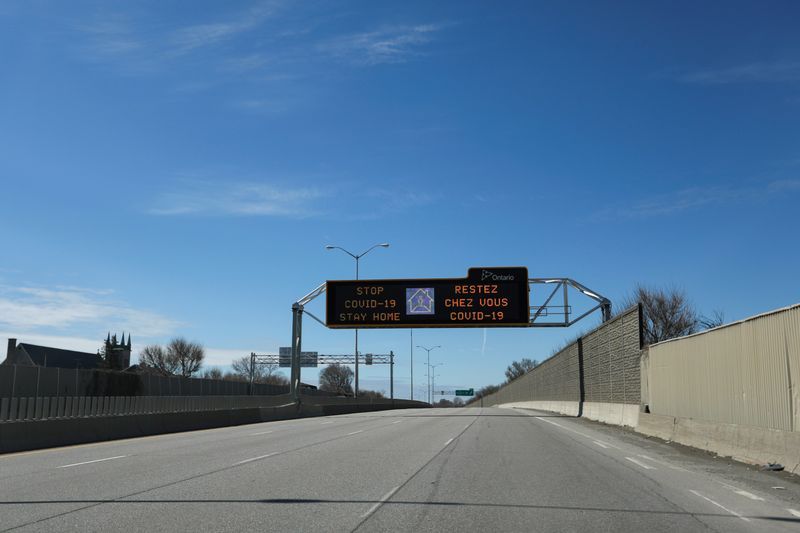 A digital traffic sign is seen above an empty highway 417, in Ottawa, Ontario. REUTERS

The Canadian province of Ontario will reopen some hair salons and outdoor dining at restaurants among other businesses on Friday, the provincial government announced on Monday, but only in health regions where the spread of COVID-19 is under better control.

The reopenings will begin as of midnight on Friday in 24 of the 34 health regions in Canada’s most populous province and the country’s economic engine, as it moves into the second phase of slowly reopening its economy.

The province will also increase the maximum of social groups to 10 people from five in permitted health regions, which include Ottawa, Canada’s capital city.

Toronto, the heart of Canada’s financial industry, and surrounding areas will remain in phase one, as will some regions near the U.S. border and one rural county hit with a large outbreak among farm workers.

The decision on which health regions to allow reopening was “based on trends of key public health indicators such as lower rates of transmission, increased capacity in hospitals, and progress made in testing,” a statement from the office of Premier Doug Ford said.

“I am confident that the rest of the province will get to stage two very, very soon,” Ford said at a press conference on Monday.

Film and television production will be permitted to restart in the approved health regions. Film production in Ontario was worth C$2.9 billion ($2.17 billion) as of 2018, according to provincial data.

Day camps will also be able to reopen, and Ford said the government will make an announcement regarding childcare reopenings on Tuesday.

Belgians return to bars and restaurants but not without virus fears