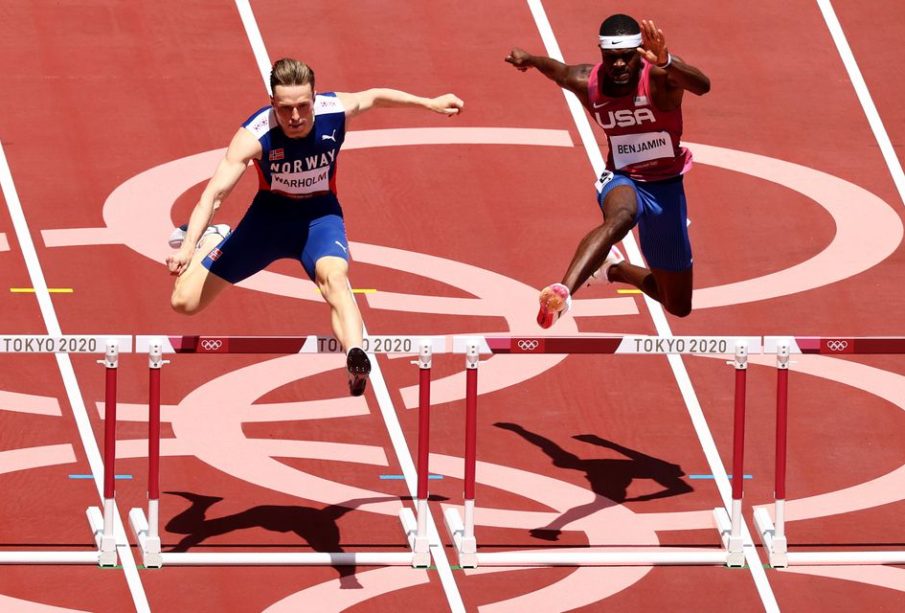 The Olympics governing body was probing Belarus’s treatment of an athlete seeking refuge while Norway’s Karsten Warholm demolished a world record on the track and Simone Biles was set for a highly anticipated return to the gymnastics stage.

The International Olympic Committee said it expected a report later on Tuesday from the Belarusian team on the case of sprinter Krystsina Tsimanouskaya, who sought protection https://www.reuters.com/lifestyle/sports/belarus-athlete-in-hands-authorities-ioc-2021-08-02 in the Polish embassy in Tokyo on Monday after refusing her team’s orders to fly home.

She was expected to fly on Wednesday to Poland, which has offered her a humanitarian visa. The IOC spoke twice on Monday to Tsimanouskaya, who was in a safe, secure place, said spokesman Mark Adams.

On the track, Warholm shattered his own world record in the men’s 400 metres hurdles final with a blistering 45.94-second run, besting American Rai Benjamin, who also beat last month’s record of 46.70 seconds.

“Man, it’s so crazy. It’s by far the biggest moment of my life,” Warholm said after carving his name among the greats of athletics history and crouching in apparent disbelief on the track. “You know the cliche that it hasn’t sunk in yet? I don’t think it has, but I feel ecstatic.”

Outdoor athletes were once again battling the Tokyo summer weather as well as their competitors, with highs around 33 degrees Celsius (91 Fahrenheit) and rain-forest humidity.

Athletes also lacked the cheers of fans, as organisers have banned spectators from almost all events due to COVID-19, which had already delayed the Games by a year. Host city Tokyo is enduring its fourth coronavirus state of emergency with infections spiking to record highs and hospitals under increasing strain.

The lack of fans, however, is not depressing viewership , the IOC said, as debut events such as surfing and skateboarding attract a global buzz.

The American Biles, considered by many the greatest gymnast ever, will ensure a blockbuster finale to gymnastics at the Games by participating in the balance beam final, starting at 5:50 p.m. (0850 GMT), her first competition in a week.

She will look to end a tumultuous Olympics on a golden high after abruptly dropping out of the team event after one vault, citing mental health issues and increasing the global spotlight on the pressures elite athletes face.

Japan’s Naomi Osaka, who had cited depression in taking a break from tennis in recent months, lost to the world No. 42 in the third round last week, one of many shocking results in this year’s Games.

Also making history, the first openly transgender Olympian, New Zealand weightlifter Laurel Hubbard, said she does not consider herself as a role model or trailblazer and just wanted to be seen as any other athlete on sport’s biggest stage.

Transgender rights advocates applauded her being allowed to compete, while some former athletes and activists believe her background gives her an unfair physiological advantage and undermines efforts for women’s equality in sport.

Away from the competition, some Australian athletes caused damage to their rooms in the athletes’ village rooms before departing while the team’s mascots – an emu and a kangaroo – went missing but have since returned, said team chief Ian Chesterman.